The Use of Games in Learning

Posted on January 9, 2020 by julianstodd

Today i am sharing an illustration around the use of games in learning. It’s not intended to be definitive, but rather a snapshot view of four applications of game dynamics and mechanics: Quests, Rehearsal, Problem Solving, and Engagement. 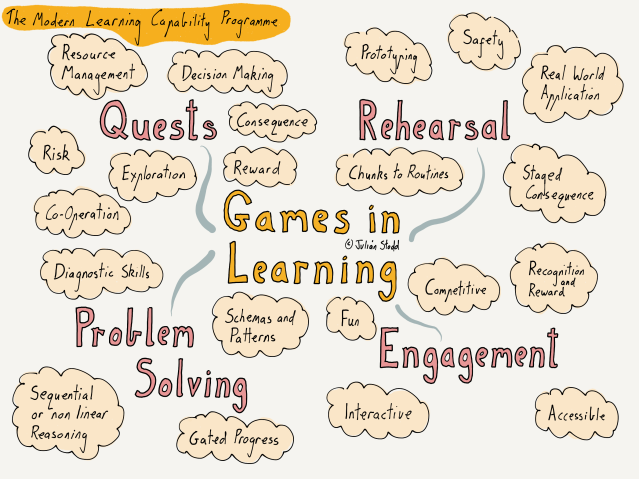 Quests are examples of full game dynamics used to create a complete experience: they allow us to address decision making, to explore planning and consequence, and concomitant reward, they involve diagnostic skills, and the recognition and management of risk. Often they are founded in curiosity and an ability to explore a situation.

Within those, or alongside it, games are used for Rehearsal: to prototype new skills or behaviours, to support (or provide foundational capability) to move these things into new real world applications. They hold staged consequence, so you learn to be right, and help us to take chunked knowledge or understanding and build it into functional routines and capability. Rehearsal spaces in games are places of safety.

We use games for Problem Solving (which can of course be part of a Quest, or Rehearsal): we can build gated sequences of narrative that require successful problem solving to progress, as well as demonstration of diagnostic skills, and an understanding of the underlying schemas, or patterns, that create the issue.

Finally, games are often used to drive Engagement: they may be fun, can be competitive, involve recognition of excellence, and often reward of that. Their very interaction can be engaging, and if the rules are known, they can be easily accessible (but as per yesterdays post, if the rules themselves require knowledge or mastery, they can be rendered inaccessible).

This post is part of #WorkingOutLoud as i design the module on ‘Games and VR’ for the Modern Learning Capability Programme’. 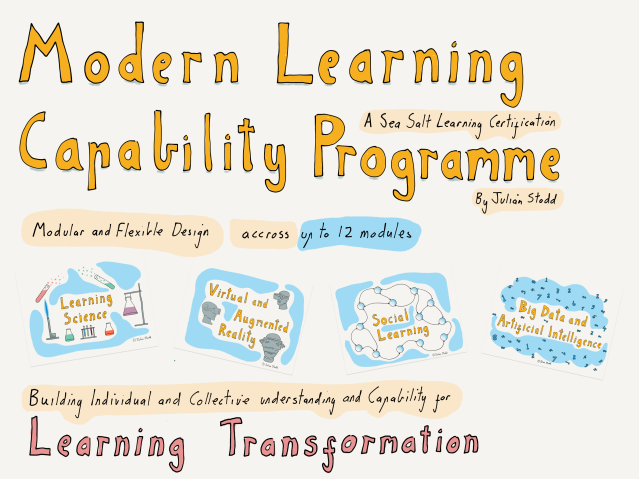