Organisations fail for a broad range of reasons, but rarely for no reason at all. I found myself thinking about a taxonomy of failure: unless we deem failure to be the action of idiots and fools, we must be open to the idea that we too may fail. Paralysed or deceived by the same forces that have levelled so many other seemingly unassailable entities. So understanding modes of failure could prove to be a useful exercise in both innovation, and change: to provide the impetus to start, and the insight to succeed. 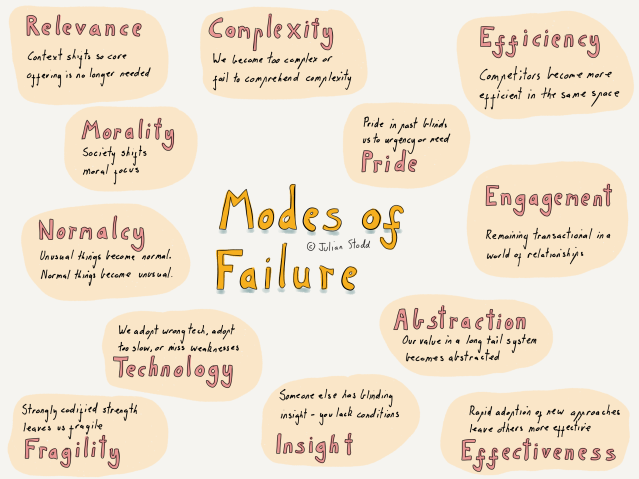 Today, i have sketched out a rather imperfect set of a dozen ‘modes of failure’, shared not as something complete, but instead as initial thinking.

Relevance: a perfectly high functioning Organisation may fail because the core offering becomes irrelevant. It may serve a need that is no longer ‘needed’ (e.g. TV repair shops, in an age of disposable technology). There is nothing intrinsically failed about the Organisation, just that it has lost relevance as society moves past it.

Efficiency: a successful Organisation may fail if other, known, competitors become more efficient within the same space. A flip side of this is that it may fail if, during it’s own quest to become efficient, it loses agility, by codifying, outsourcing, systematising, automating, or adapting, to be too specialist, or too complex.

Engagement: we can fail by remaining transactional, in a world that is increasingly based upon relationships. We can lose engagement of customers, but also engagement of employees, or partners. Increasingly, discretionary effort, willingly invested individual agency, is differentiating. We need to earn it, and to fail to do so may simply be to fail.

Effectiveness: adoption of new technologies, or Organisational design approaches, may lead others to be more effective than us. This is similar to efficiency, but ‘efficiency’ measures our cost per unit of fulfilment, and ‘effectiveness’ is a measure of our total potential output, so they are linked: if we are more efficient, we can be more effective.

Insight: somebody else may have blinding insight, which enables them to reframe, or redirect effort. Without that insight, or without having that insight first, we may fail. Which leads us to consider how insight comes about: how can we invest, and plan, to be lucky?

Normalcy: this may not be my best chosen word, but ‘normalcy’ is about unusual things becoming normal, or normal things becoming unusual. For example Uber normalised the cognitive discord of getting into a stranger’s car. And ATMs made the act of talking to a bank teller abnormal.

Complexity: we can fail by becoming too complex in our operations, or by failing to comprehend complexity. This may include a failure to discern between ‘complexity’, and ‘radical complexity’, leading to primary analytical narratives that fail to comprehend the invalidity of their own premise. Which is another way of saying, surface analysis that does not scratch deep enough!

Technology: we can fail related to technology in myriad ways (happy days…), by adopting the wrong technology too fast (BetaMax vs VHS), by failing to adopt technology fast enough (Taxi vs Uber), by failing to recognise limitations of technology (probably some early machine learning e.g. crime prediction and bias in data), or applying technology to what is essentially a social issue (possibly the view of cryptocurrency as a ‘thing’, when the actual ‘thing’ is the democratisation of power itself).

Pride: our pride in past accomplishments may blind us to the need for change. Or even if we want to change, may rob us of the ability to do so. Pride is a unifying force, so can bind us into tribes that are anchored within the current state.

Abstraction: as markets diversify, and value chains fragment or extend, our value within a system may become abstract. This is especially true of entities that used to have brand value and presence simply by ‘existing’, but are now outcompeted by emergent, often brand relationship led, competition. An example may be in energy supply: older Organisations typically hold infrastructure and mainline supply, but emergent ones are resellers, trading off e.g. social purpose, or environmental credentials.

Fragility: we can fail if we build an Organisation that is too fragile, and crucially, that fragility may come from our very traditional strength. I typically define a fragility as ‘codified strength’, strength that is held in system, process, replicability, and control. Codified strength struggles to adapt, struggles with the ambiguity of change.

Morality: we can fail as society shifts it’s moral focus. For example, petrochemical companies face challenge as some parts of society shift to view them as part of a global climate crisis. Tobacco companies lose the ability to market in the sports arena as the morality of smoking shifts. Morality, our bedrock, is both more fickle, and contextual, than we may care to believe. It’s not absolute, but rather contextually agreed, in an internally self referential, and continuous, dialogue.

Those twelve ‘modes of failure’ will not form a complete list, but perhaps can give insight into things that we should consider, when considering our own resilience and threats.

Author and Founder of Sea Salt Learning. My work explores the Social Age. I’ve written ten books, and over 2,000 articles, and still learning...
View all posts by julianstodd →
This entry was posted in Failure and tagged Failure, Innovation, Leadership, Technology. Bookmark the permalink.

6 Responses to 12 Modes of Failure