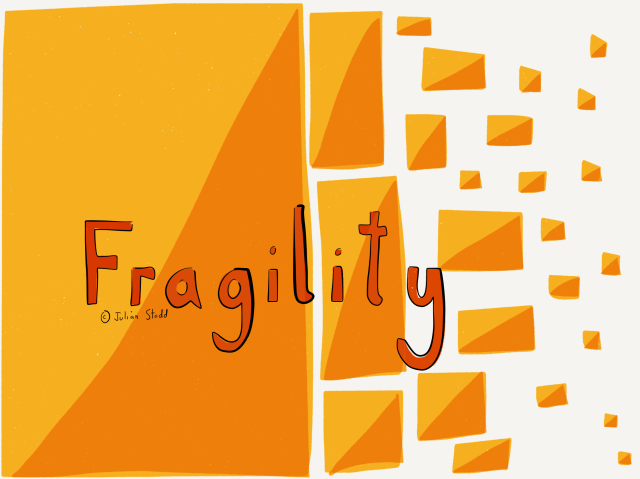 Longevity is not a sign of permanence, but rather the proudly worn badge of history. History, as we forget at our peril, is no guarantee of future. An organisation can be both old and massive, with a history of resilience and innovation, a proud track record of change, and yet, in the Social Age, be desperately fragile.

The mass of an organisation is no indicator of anything other than blind momentum and an inbuilt lethargy. Not systems not process, compliance nor technology will make an organisation more permanent, less brittle, unless coupled with a Socially Dynamic culture and mindset of holistic adaptation in the face of constant change. Fragility is not caused by lack of process and control, but rather an abundance of it.

The more tightly we are specialised into a current space, the less able we may be to adapt to a new one.

I described yesterday how a dancer may trace the space around the thing they’re trying to express, how they use movement, gesture, and gravity not to define the thing, but rather to suggest where the story lies. By contrast most organisations seek to define space and own it, with little subtlety. There is a belief that solidity of a story is what will make it last, when in fact it is the memory of the story that lasts, and memory is a facet of performance not volume alone.

We have a sense that those things which are fragile will be delicate, finely made, translucent and thin, whilst in reality the things that seem most massive and give the greatest illusion of permanence and intent may be the very things most at risk of fracture.

Author, Artist, Researcher, and Founder of Sea Salt Learning. My work explores the context of the Social Age and the intersection of formal and social systems.
View all posts by julianstodd →
This entry was posted in Fragility and tagged Adaptation, Change, Dance, Fragile, Fragility, Leadership, Permanent, Socially Dynamic. Bookmark the permalink.

4 Responses to The Fragile Organisation