Sharing an extract from the new book: ‘Welcome to the Social Age’

I’m writing this week so, as is my usual practice, am sharing some of the live work as it tumbles out. The new book is provisionally entitled ‘Organisational Change in the Social Age’, and is based around the framework i’ve been developing on the blog for the last couple of months. Today, i’m working on an early section, a foundation piece, called ‘Welcome to the Social Age’. I feel slightly cheeky sharing this here, as it’s substantially based on a prototype essay i shared earlier this year called ‘Here be dragons: Ecosystem of the Social Age’, but i have partly rewritten it (and improved some grammar!), and, when it comes to it, that’s the point of this space. It’s a rehearsal space, letting me develop ideas that, eventually, make it into a broader (and better proof read) space. 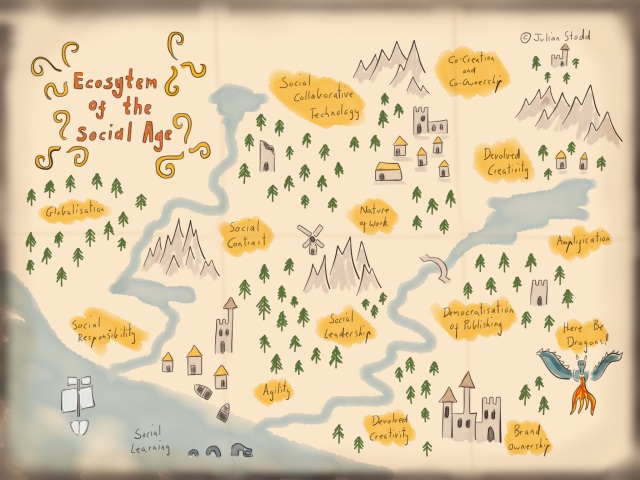 A map of the Social Age

“The world has changed: everyone can feel it, but it’s not always clear what to do about it. There’s a sense of restlessness: hierarchies of power and control are being edged out by more collaborative, competitive, evolutionary and relevant business models.

So with so much change going on around us, it seems slightly odd that I felt the need to write a book about change. Surely all we have to do is batten down the hatches and sit it out, or grab a paddle and surf along on the waves?

Those who batten down the hatches, who resist or deny change, those are the ones who will be swept away. And those who grab a paddle? Well, it’s easy to talk about sailing, but sailing is an art and a science. It’s easier to talk about than to master, and it’s in the execution that it’s easy to sink. The theory is the easy part. As we will see, when we come to talk about the Constrained organisation, it takes more than willingness and intent to achieve transformation.

The changes we see cross from technology to sociology, from attitudes to action. I call it, the Social Age.

With change in the Social Age being constant, only the agile can survive and thrive: It’s a significant challenge for organisations and individuals to adapt, which is why I’ve sketched a map so we can find a way.

The Social Age sees change on every front, and it’s only through a holistic pattern of adaptation and agility that we can hope to surf the wave. First: recognise how much has changed. Next, prototype, learn, adapt.

Let’s start with the ‘Nature of Work‘. You used to enter a contract with the employer: a legal and ethical one. The organisation gave you a job: a defined role, the hardware and software to do it, an office, maybe a car, mobile phone, laptop, access to fax machine and a secretary. In return, you got a salary, health insurance and security, a development pathway and a sense of purpose.

That was the Social Contract: play the game, reap the rewards.

But it’s broken: i no longer need an office, because if i’m not working from home, i can work in a coffee shop or a co-working space, which is not only more fun, but serves better cake too. A laptop? It used to be a differentiator, but now the technology is cheap and accessible. It’s no longer adding huge value and, indeed, it’s likely to be limiting because it’s heavy, slow and comes with a troublesome set of IT policies and a HelpDesk which is more of a hindrance.

More importantly though, both the security the organisation offered and the development pathways we could follow over time have gone: you used to join at the bottom of the ladder and slowly climb your way up, but today, the ladder has collapsed, fallen by the wayside as everyone over the age of thirty has been made redundant or fears for their job. Nothing is permanent, your contract especially so. The impact?

When the social contract is fractured, we won’t engage in the same way: sure, people are nice, they are willing and they are able, but they are not emotionally invested to the same extent they once were. Simply saying ‘this is our change journey and we need this from you’ is of no use unless it’s also accompanied by the sentence, ‘and we recognise you may not come out of it with a job at the end, but we will do this for you instead…’. The flexibility afforded by a flexible attitude to employment from the organisational perspective has driven the evolution of an independent and flexible attitude by us, the employees. We operate as a unit of one: the only constant you will have through your career is your own company and the community that surround you.

But our ‘unit of one’ is not alone: we are connected through our communities, communities that empower, challenge and support us. These communities are facilitated by social collaborative technology: the technology that supports our conversations. This is typically both synchronous and social, meaning that it falls outside the reach or control of the organisation and can often respond faster.

This is important when we are considering engagement. When organisations want to support communities, they are best informed to do this through offering resources and permissions, not by owning the technology. Anything that you own yourself, as the organisation, inherently falls into the formal space, and can feel like a throwback to the older social contract.

This forms the backdrop to organisational change: a revised reality in which we have fewer levers of power over the individual (but greater opportunity to engage openly in a wider number of spaces, semi formally).

But as individuals, we don’t need infrastructure: we have infrastructure coming out of our ears, so the organisation is unlikely to be able to keep up with either the pace or fluidity of the wider ecosystem.

Instead of trying to own everything, help people to use it better. Even if that means losing control.”

12 Responses to Sharing an extract from the new book: ‘Welcome to the Social Age’