In January i’ll draw my third map of the Social Age. Why? Because it’s out of date. That’s the thing with maps: they chart our current understanding, but are subject to further exploration, which is why it always says ‘here be dragons’ in the corner. That’s how medieval cartographers indicated that they had no clue what was going on down there, but were confident it was fantastical.

We have a lot of dragons, some more obvious than others. I started sketching out some of the continuing evolution: building nuance behind the evolved Social Contract between organisations and individuals, seeing more mature thinking about the new nature of work (and increasing numbers of spaces and tools to facilitate new ways of working), the increased recognition of Social Leadership, which exists outside hierarchies, and the broader impacts of creativity and publication as applied to change and innovation. And that’s just for starters.

I talk about ecosystem change, because it’s not simply one or two buildings, but rather the whole environment. And environmental change requires holistic adaptation: at scale and speed. So i’ll start 2016 with a redraft, but it will remain a sketch, not final, but iterative and subject to change. After all, that’s the point of exploration: to push the boundaries of what we know, to map it and share it. Then to walk down new paths. 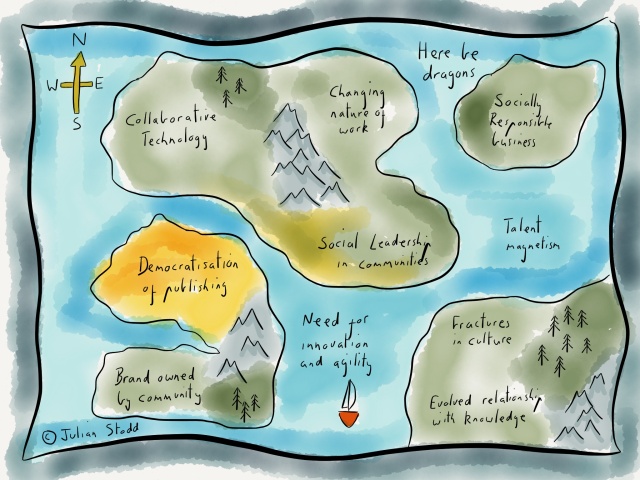 Author, Artist, Researcher, and Founder of Sea Salt Learning. My work explores the context of the Social Age and the intersection of formal and social systems.
View all posts by julianstodd →
This entry was posted in Adventure, Social Age and tagged Cartography, Change, Creativity, Dragons, Ecosystem, Innovation, Leadership, Map, Social Age, Space. Bookmark the permalink.