Posted on December 5, 2014 by julianstodd

This is a #WorkingOutLoud post as i reflect on my week so far at IITSEC, the training and simulation conference. My thoughts are not yet fully formed, and it’s been a long week, but this is what i have so far. 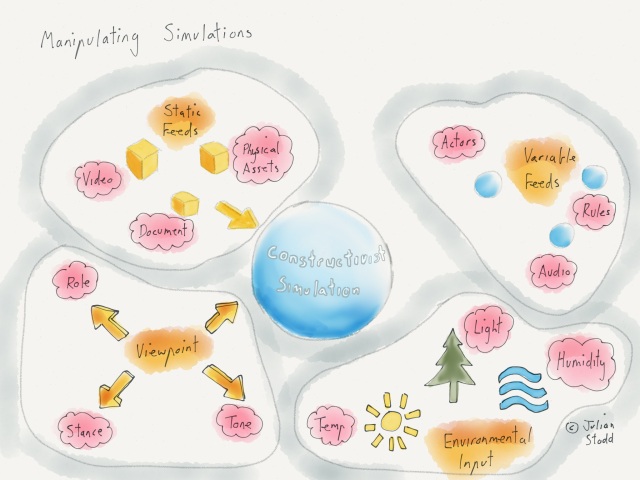 There is great value in simulations: safe spaces to rehearse behaviours and explore consequence. But they don’t have to be linear and scripted. In this piece, i’m drawing together ideas shared at the conference around constructivist scenarios, and i’m introducing a categorisation of inputs.

Think of it as a stage: we can influence and control different elements.

There are static elements: hard coded, maybe video, documents, physical assets that we use with the game players. These are prepared in advance and our only flexibility is in the chronological release.

Variable feeds can be changed ad hoc: they may include the input of actors and other players, but could also include the rules themselves. We can vary rules to introduce dissonance. If we are testing agility or resilience, this may be valuable

Environmental factors can be altered, such as light and power, and we can also change roles, literally getting people to move between characters or, indeed, between stances e.g. from a reconciliation to a harder stance.

It may be worth reading this alongside my earlier piece around serious gaming.

Simulations are ambitious for commercial organisations to employ, but can be hugely powerful.

Author, Artist, Researcher, and Founder of Sea Salt Learning. My work explores the context of the Social Age and the intersection of formal and social systems.
View all posts by julianstodd →
This entry was posted in Discovery, Disturbance and tagged Actors, IITSEC, Learning, Performance Support, Perspective, Reflection, Simulation, simulation conference, WorkingOutLoud. Bookmark the permalink.