Social Gaming for Learning: a practical exploration of #gamification

For many years i was able to maintain an illusion of competence when it came to the xBox. Every Monday night, Rich and I would get a pizza and invest/waste the evening playing such classics as Halo, Gears of War and Medal of Honour. We would do this whilst revelling in our prowess, our finely honed skills and our lightning fast reaction times. Until, that is, we went online. At that point, we were introduced to a new word. Defeat. Administered, as it happens, by a succession of European teenagers, all of whom were faster and better than we were. Or maybe they were cheating. Yeah, let’s go with that. In any event, we fell off the scoreboard.

The appeal of gaming has, it’s safe to say, not gone unnoticed by the wider world. Gamification and the use of game dynamics in learning design is one of the hottest topics on the board right now, despite the fact that my spell checker insists it isn’t real at all. 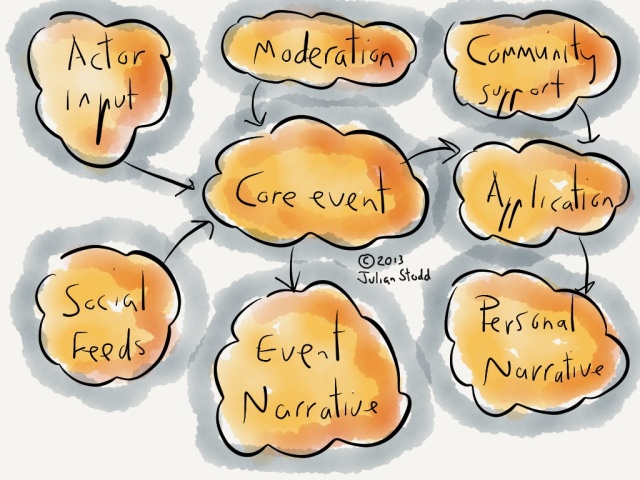 Example of a Social Gaming approach, where the core event is surrounded by social inputs and social learning spaces

One of my areas of interest is in social gaming, introducing both social learning elements and game dynamics to learning solutions, so in this article i want to introduce one such approach in the form of scaffolded simulations with a social learning backbone. I do this to illustrate some of the potential and some of the challenges, but also to give what i hope is a practical illustration of something that, with a little work, you could implement this year.

The premise of social gaming in this context is to create a semi structured environment, consisting of both learners and actors, and to co-create a story whilst narrating and examining our learning, then to take the learning out of the scenario and back into our everyday lives.

What can it look like? Here’s a practical example:

We create a core event, let’s say for a group of first responders in an emergency. We scaffold a scenario around this. In a scaffolded scenario, we map out the core story. In this case, we may decide that there’s been an explosion on the High Street. We then mark out the core characters and the narrative: in this case, we will have members of the public, first responders and media channels. Finally, we put together an infrastructure for communication, in this case a simulated Twitter channel, a simulated news channel, people on the telephone calling in and direct interaction with a first responder.

Now we need to map out the learning dimensions: in this case, i want to test two things. The first is the ability of the team to discern between conflicting sources with contradictory information, the second is the ability of the leaders to define a problem solving space and, critically, to respond to an evolving situation. In other words, within the scaffolding, i want to create a fracture point, where new information should lead to a fundamental reassessment of the situation. In this case, we can test this by their ability to determine (or realise) that a figure seen running from the scene was actually a first responder out of uniform running for a first aid kit.

Once everything is in place and rehearsed, then we can run the day itself, and for this to happen, we need a model for moderation. 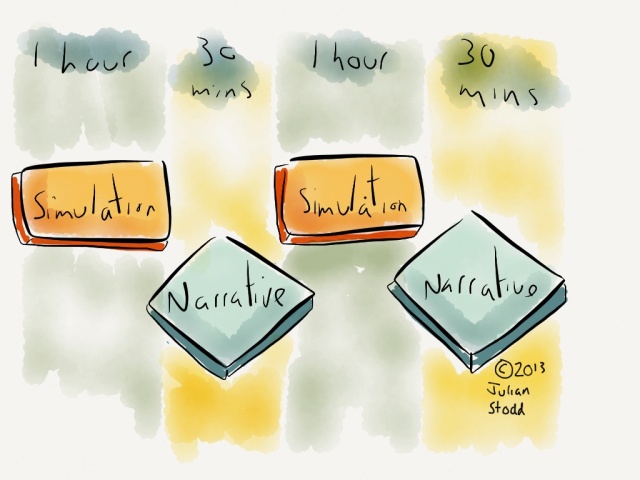 We start and stop the scenario, using the breaks to narrate the learning and co-create the story

For a social game like this, moderation will take two forms: firstly, facilitating the smooth choreography of the event, but secondly, to start and stop the simulation to build a group narrative for the day.

The game runs for an hour, then we stop it and build a shared narrative, capturing what everyone is thinking, how they are drawing conclusions, how they assess each other is doing in role etc. Then the simulation restarts.

At the end of the day, we draw this snapshot picture into a co-created full narrative of the unfolding day, taking on a reporting role and gathering first person narrative around it. We also use the scaffolding as a framework for a conversation around the scenario and the learning, to pinpoint key decisions and underlying reasoning.

This completes the formal part of the event, so now we move to the application, which is supported by a social learning community space.

Here, individuals have objectives to relate back to their ‘real‘ world, and as they do so, they narrate their learning back into the community. We encourage learners to relate key learning back to the shared experiences of the simulation, reflecting on their decision making processes and how those have been supported by the learning, but also asking others (under direction of the moderator if required) to question and offer challenge. 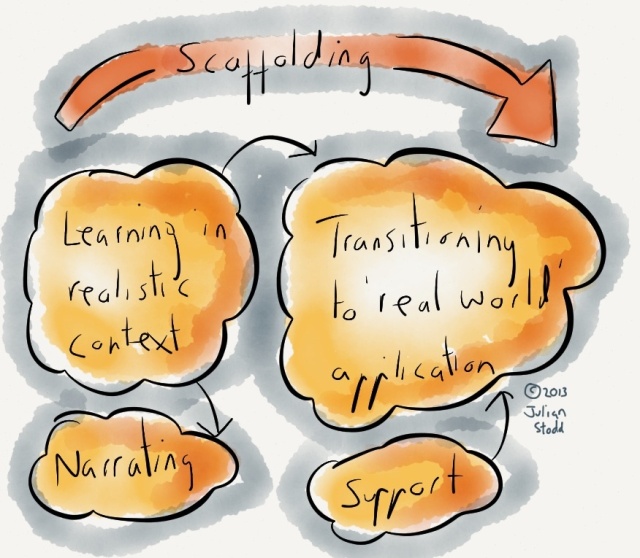 Transitioning the scenario based learning out into the real world, beyond the social game, is crucial. It needs to be supported throughout by the community

Ok, so that’s a brief outline of how we can scope, develop and run a social roleplaying game, working within a scaffolding and narrating learning as we go.

The success of any gamification in learning relies on:

1. Making learning explicit and relevant to role: the more abstract, the harder it is to get the ‘application’ part.

2. Understanding what on earth we’re trying to teach: this isn’t just true for gaming, but we need real clarity of what we are looking to develop and how, in this case, the ability to make value judgements between different and often conflicting sources and secondarily the ability to redefine a problem space half way through.

3. The group narrative and the definition of individual objectives to test back in the workplace, then the subsequent narrative around this.

Clearly this isn’t a definitive guide to Social Gaming, but i wanted to bring to light a practical application with an understanding of the underlying learning method to facilitate further discussions. Games are here to stay, but they have to be so much more than just scoreboards and competitions.

8 Responses to Social Gaming for Learning: a practical exploration of #gamification