I am writing today about power, about different forms of power, and the structures that it is held within. This relates to a number of strands of work that I’m exploring at the moment, from resilience, to Social Leadership, and the limits of hierarchy. In this piece, I’m going to consider three forms of power: ‘individual’, ‘hierarchical’, and ‘networked’. 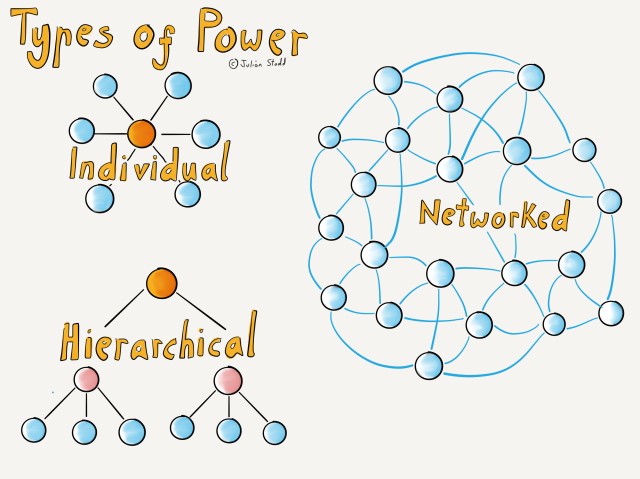 I’ve previously written about ‘social’ and ‘formal’ types of power: social being that which is contextual and consensual of the community, formal being held within the hierarchy of the organisation and codified in rule sets and process. In this piece I’m more concerned with how that power is held, and hence it’s vulnerability to disruption or subversion. This is fairly early stage #WorkingOutLoud, so expect these thoughts to continue to evolve.

Individual power is likely to be social, based upon reputation, or formal, based upon position within a hierarchy. For example, a political figure may hold individual power and influence through their position, whilst an author may hold power and influence through a social authority that they have been granted as a result of what they have written. So whilst one is a social form of power, and the other formal, we can consider how they are rooted in the individual, and may be disrupted as a result. 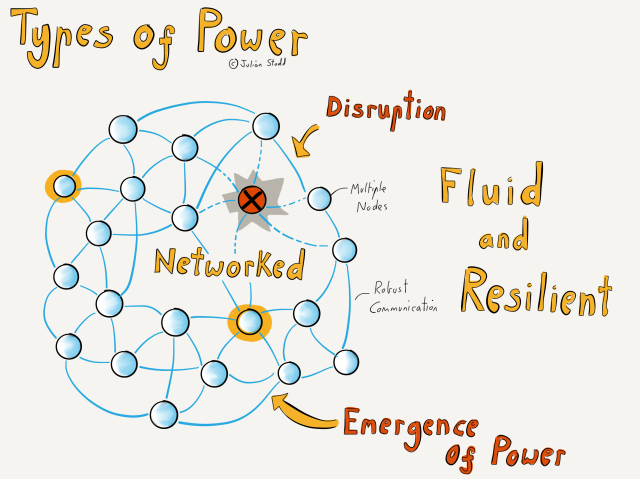 Countering individual Social Authority may therefore be reasonably easy, unless that Social Authority is also a networked type of authority based upon ideas. This is where things can get complicated. Take some recent examples, such as those of Julian Assange or Edward Snowden. Both have individual Social Authority granted to them by the community, whilst lacking or being in active opposition to formal authority. But both also have a form of networked power through their ideas: a global community united around shared interests, purpose, and intent. The reaction of the formal system to the stories that these individuals have told, is to attempt to remove them from a position of authority, but in both these cases, the social power has been amplified, and indeed attempts to control their personal authority and freedom may have resulted in a strengthening of their networked power and authority.

This is a significant challenge for formal organisations, be they companies or governments, as they attempt to influence, subvert, or control social voices. As I’ve said before in the work around Social Leadership, Social Authority can always and fully subvert formal, whilst formal can never fully control and silence social voices.

So hierarchical power, that which is codified within hierarchy, rule, system, and process, may be fairly resilient: this is the type of authority we see in most organisations, and in military contexts, where the hierarchy can be carefully drawn and mapped out, and people placed within the system. As I said, this type of authority may be fairly resilient to disruption, if we allow time for induction into the system. 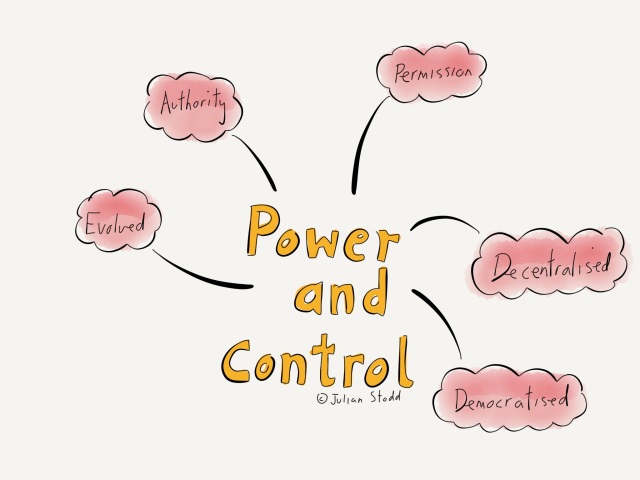 We can remove nodes within the network, but those nodes are typically connected through many and diverse bonds, be they tribal, social, formal, or simply needs-based bonds. Removing one node may be counterproductive, especially in a network of ideas and ideals: it may simply cause power to emerge in other parts of the network. Indeed it may even amplify the effects of the network: networked power may thrive on disruption and be amplified by attempts to control it.

Truly networked and social forms of power by contrast, cannot be controlled or subverted by formal authority, nor can they be disrupted through direct, kinetic, political, or other formal power-based action. This is the classic dilemma of idealism versus authority.

There are situations in which we need to counter this networked Social Authority, the most obvious being around the threats faced by extremism in the world today. There are other, possibly less serious, contexts in which we need to understand how Social and networked authority can be curbed: for example, when we need to find consensus in peacekeeping roles, or negotiating settlements, we need to fully understand the types of power at play, and how we can align to them more closely. This may not be about trying to silence social and networked voices, but trying to find consensus and agreement, in service of pragmatic ways forward.

I maintain that networked and socially moderated authority can largely only be disturbed through engagement. Take the example of white hat hackers: if we view the world in simple terms with software companies being good, and hackers being bad, we condemn ourselves into a cycle of conflict perpetuated through socially moderated systems of respect and power. By contrast, if we create space for white hat hackers, spaces where people can carry out hacking activities, be recognised and rewarded for them, but be recognised and rewarded by the formal system, if we create spaces where subversion and disruption can become useful, but still operate outside formal system, process, and control, we can create a middle space of engagement.

This middle space of engagement does not disrupt networked power, but it significantly reduces the power that you can wield, because there are now two choices: people can engage in fully subversive activity, or they can retain their freedoms but still engage in certain types of activity, which are more aligned with established or acceptable social systems. We can de-power the system. We can create a middle context, indeed, a context that we can learn from in the formal system.

Understanding different modes of power is not about enabling formal systems to exert absolute control over social ones, indeed, as we have noted, that is simply not possible. More it’s about understanding how systems can coexist, and how we can exert influence within both.

The Social Age has changed everything: broadly speaking, it has eroded formal authority in favour of socially moderated, divergent and contextual Social Authority. This has eroded the purpose of organisations themselves, as distributed social mechanisms of production have empowered individuals and small groups, whilst making large organisations less able to react to the ever-changing nature of the world today. If you are interested in this aspect, look at the work around the Dynamic Change Framework which covers this in detail. I argue principally that the Social Age is a matter of evolved sociology, not simply technology, hence my interest in evolved forms of power and authority.