Without apology, another early stage #WorkingOutLoud post today as i work to complete the paper i’m writing on ‘Black Swans and the Limits of Hierarchy’ for a conference later this year. Early stage because, having set the foundations, i’m trying to move into the ‘what we do about it’ part of the paper! The premise is this: we operate in Known Frames, utilising the power of Known Scripts, under the authority of Formal power. Black Swan type events operate in Unknown Frames by Unknown Scripts. Category errors cause us to misconstrue the ‘unknown’ as ‘known’, hence deluding ourselves that things are under control until sudden failure occurs. That’s what this illustration seeks to capture: 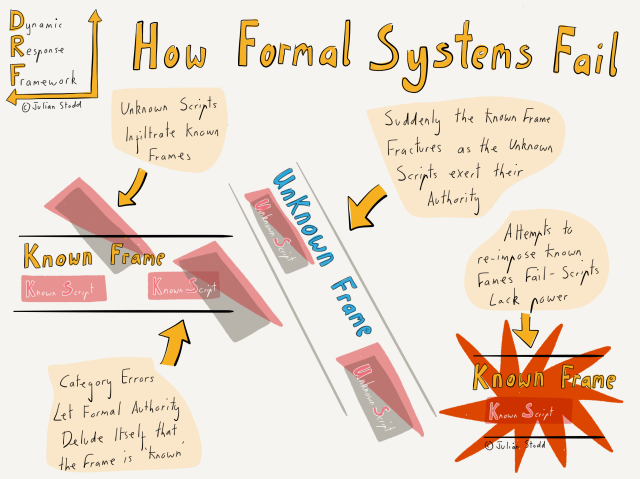 As we operate within a Known Frame, Unknown Scripts slowly infiltrate. Our native, trained, conditioned responses allow us to (or trap us into) adopting a Known Frame and recognising (miscategorising) Known Scripts, whilst actually we are drifting ever further from the Known.

At some point, a fracture occurs when the credibility of the Known Scripts is broken: this is the failure point, where the system is adrift. Typical kinetic responses to reimpose Known Scripts and Known Frames can fail if we don’t truly understand where the power now lies.

Central to this challenge is the way that Scripts are not just descriptive categories narrating observed action, they are powerful in themselves. Scripts define and power action, not just observe it.

So when we are trapped in a Known Frame, our own Known Scripts can lose power, and we find we cannot control (or even recognise) Unknown Scripts (because we are operating outside of Known Frames).

Later, i will explore how we can use narrative approaches to work around this challenge. For now, i’m trying to clarify and illustrate the core challenge.

Author, Artist, Researcher, and Founder of Sea Salt Learning. My work explores the context of the Social Age and the intersection of formal and social systems.
View all posts by julianstodd →
This entry was posted in Adaptability and tagged Black Swans, Category Errors, Failure, Frames, Learning, Military, Scripts, System Failure. Bookmark the permalink.