Guide to the Social Age 2019: Certainty

I’m working on a new Guide to the Social Age, 2019, and am sharing a series of posts around some of the core areas. Today, exploring the notion of ‘Certainty’. 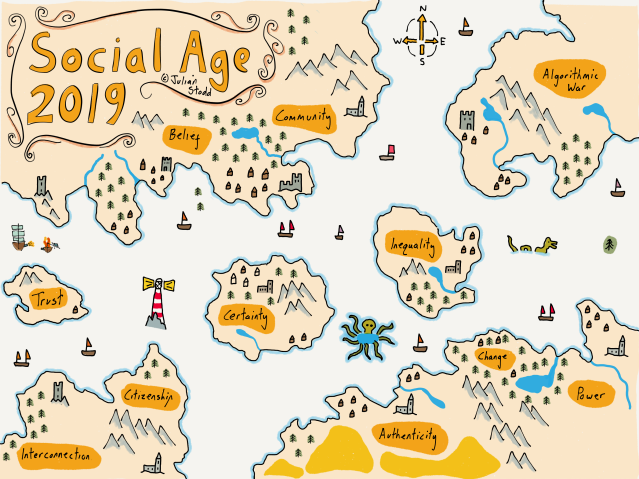 Certainty: this is a bedrock notion, that the ‘ways we know the world’ are crumbling. Last year i started to use the term ‘Dominant Narrative’, to describe the social narratives we use to make sense of the world. Consensual delusions of ‘how things just are’. Our attitudes to equality, to capitalism, to employment, all of these are Dominant Narratives. To us, in the moment, they feel concrete, but over time, all have evolved. All simply represent a common, consensus, view.

The Social Age sees many established Dominant Narratives fracturing: the nature of work, the nature of education and learning, the notion of nation, the dynamics of gendered power, many things that were ‘certain’, now shifting.

The significance is that ‘certainty’ is not an abstract concept: it accretes system, process, and other artefacts, around itself. Rules, laws, organisational structures, financial structures, systems of control and consequence, all grow around our ideas of ‘certainty’. As certainty proves ephemeral, so too does much of the structure that we aggregated around it.

Take the location of work: it used to be within an office, so ideas of commuting, of lunch spots, of infrastructure, of offices, of timekeeping, of management, of supply chain, a whole host of logistical, and social, structures were created to ‘manage’ and ‘enable’ it. But now that the nature of work has changed, much of that old structure becomes a hindrance. The emergence of coffee shops with great WiFi was the precursor to fully shared working spaces, and now the emergence of the new ‘Guild’ halls, powerful spaces of creative energy, hubs of innovation and hosts of networks. All sat in the shadow, or ruins, of the old.

So old notions that were ‘certain’ are failing, but what is replacing them? And what is the true risk of this failure? The issue here is that our idea of certainty forms the foundation of the ways we frame understanding and action. If we are ‘certain’ of how the world works, we have solid foundations for contextualising, and planning, action. But if our certainty is delusional, outdated, or plain wrong, then our foundations are fractured.

The Social Age is a time of broad uncertainty and, most importantly, we have not yet arrived at the new answers. Most of the disruption that we see is primary: it disputes or negates old frames, but does not necessarily imply the new. Take education: clearly the geolocation, centralisation, and ownership, of learning by any central authority is an outdated notion, and hence the entire infrastructure of education (schools, centres of excellence, universities etc) may be outdated. But what the new model is is less clear: collaborative, distributed, co-created, certainly. Taught, occasionally. Owned? Rarely. Impacted by technology? Undoubtedly. But state funded technology? Unlikely. The disruption is clear, the answer, less so.

A core feature of the Social Age is a deep seated uncertainty, and no clearly new organising principles.

Author, Artist, Researcher, and Founder of Sea Salt Learning. My work explores the context of the Social Age and the intersection of formal and social systems.
View all posts by julianstodd →
This entry was posted in Social Age and tagged Certainty, Map, Social Age, Working Out Loud. Bookmark the permalink.

7 Responses to Guide to the Social Age 2019: Certainty