Change Curve: The Energy of Change

As i continue to develop the work around the Change Curve, i’m writing a series of pieces to fill in the gaps: as i develop the book out of this, they will slot in to complete earlier narratives. Today, i’m reflecting on the energy that powers change, and how where it originates may impact on observed activity.

Systems require energy to change, and that energy can be either internally generated, or externally applied. The source of the energy may affect the activity we see within a community. Top down models of change struggle because, whilst they think they are pushing against resistance, may actually be pushing against air. No matter how hard you push, you won’t get traction. Sure: you can get first order effects, where you directly influence someone to do something, but you can’t gain either amplification or momentum.

Co-Created change, by contrast, relies on precisely that internally generated energy and momentum to power the change: the energy is generated within the system, not injected from outside it. 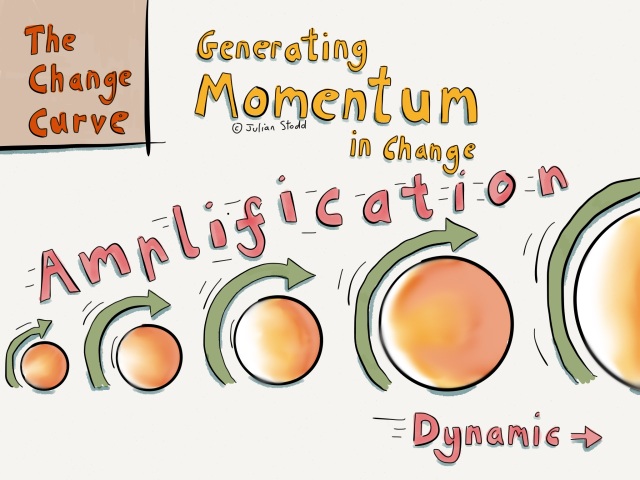 So the applied model of change can impact on the type of energy imbued into the system (or generated from within it). But there’s more: low energy systems, ones which rely on external power, are, by inclination, lethargic. They lack impetus. High energy systems, ones which house and generate their own internal energy, can throw it at problems in spades. So highly energetic communities may be self starting and self powered, gaining both traction and momentum. Whilst low energy ones are neither changed by pushing harder, nor do they change themselves spontaneously.

Author, Artist, Researcher, and Founder of Sea Salt Learning. My work explores the context of the Social Age and the intersection of formal and social systems.
View all posts by julianstodd →
This entry was posted in Change, Change Management and tagged Change, Change Community, Change Curve, Community, Energy, Momentum, Organisational Change, System. Bookmark the permalink.

4 Responses to Change Curve: The Energy of Change