Heartbeat of the Social Age

With a degree of trepidation i found myself on the roof of the old rum distillery: maybe five floors up and clutching the ladder with white knuckles. It’s not that the ground i stood on was particularly precarious (indeed, it was a well maintained flat rooftop the size of a squash court), but rather the cumulative effects of the route up there and the lack of fence around the edge. Clearly i’m conditioned to react to such things. Vertigo for me is always a matter of stubbornness. I made it to the roof of St Pauls Cathedral once, although it admittedly took me an hour, clinging to the walls like a limpet as Japanese tourists waltzed past. 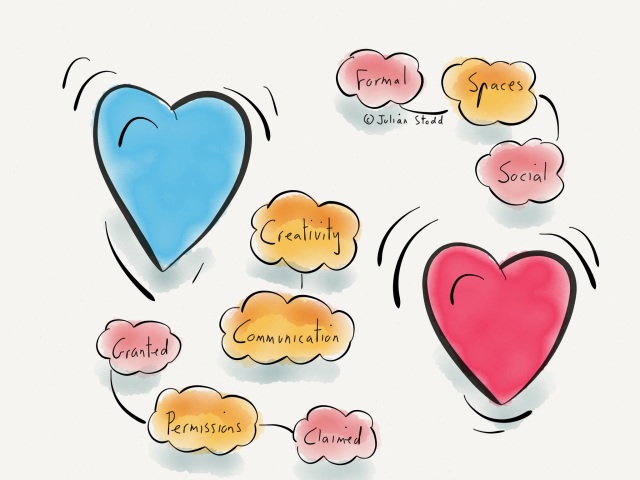 The kindness of strangers is a wonderful thing, all the more so when life takes you round the world and into strange communities. Except that Derek Hoffend, my kind host, wasn’t exactly a stranger. We were connected through a social web: friends of a mutual friend. Friends once step removed, connected purely through our communities, forged over shared interests and values.

A few weeks ago i was in Boston: Scott read that on LinkedIn and linked me to Derek, who extended an invitation to a stranger, based on the suggestion of a friend. Social connectivity and testament to communities formed on shared interests: you will doubtless have something to talk about, even if we don’t yet know what it is, was Scott’s implicit message. And he was right.

Derek is an artist in sound and metal, wood and space: his sculpture is multi layered, not just physical, but rather aural and somewhat visceral.

And so it was that i found myself in his loft studio, after the tour of the rooftop. We sat in a box that he had a great name for, but to me was clearly a womb: opposite each other, grasping a sensor in two hands that measured our heartbeats. My heartbeat was reflected back to me in a pulsing blue light, the entire roof of the box. Also, in a deeply reverberating bass beat that resonated through my back and body. Derek, holding a similar device, was generating red flashes of light and a similar, although different tempo beat. When our heartbeats synchronised, the light flashed purple and the resonating sounds grew louder.

I loved the idea: as an artist, he had created a physical space, but the ‘creativity‘ was co-created by two people in a shared experience, through multiple media. Dynamic, co-creative, adaptive, expressive.

Derek’s building itself is adapted: repurposed from a distillery to house a series of workspaces and residential units: art, life, people, sculpture, all coexisting. A creative space: creative because of the community, not because creativity is inherent in the space itself.

These notions are important: we talk about creating both spaces and permission for conversation. The physical space is part of it, the building itself, but it’s the permission that is key. And if we don’t grant it, it will be claimed, possibly out of earshot.

Derek and i talked about art, about music, about the ways we communicate and create. Next day i’m at a conference in Vegas on cross cultural decision making. Talking to people from the military, government, industry. About largely the same things. The environment is different. The people are more formal. But the concepts are the same, probably because we are all thinking about the same thing: how do we communicate, how do we share a reality, how do we create the space and permission to engage.

This is what i love about the Social Age: it’s the time of communities, the rise of Social Authority that transcends barriers of distance and rank, erodes formal hierarchies. We go where the conversation is most interesting, most relevant, most timely. We go where we can debate and create, share stories and ideas, and #WorkOutLoud as we do so.

Connected to ideas through our networks: challenged to move ourselves from our established views by experiencing (in this case literally) the realities of others, of new ideas, new experience, new thinking.

4 Responses to Heartbeat of the Social Age