Can Brian May save the day? Apes, astrophysics and the perils of the Social Age

Once in a while, circumstances allow you to bring all your favourite things together in one place. Today is that day: i get to write about Queen, endangered animals, social media and learning. 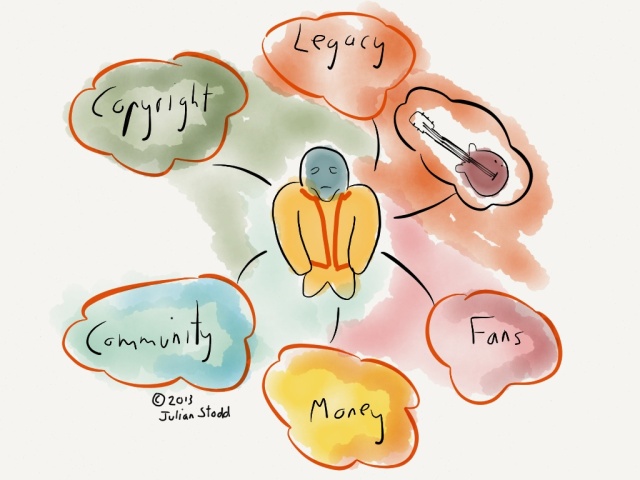 The Mercury Conundrum: what was going to be a conversation about legality and copyright has rapidly evolved into a very public debate about ownership, icons and social values of what is ‘right’. All played out on a global stage. But don’t worry, Brian is on the case…

We’re in the middle of a crisis: not a missile crisis or a political one, but rather a crisis about fans, friends, image and ownership and, when it comes down to it, money.

You may have noticed lately a trend of making giant fibreglass creatures (lions, cows, apes) and getting them decorated up and spread around town to make an art trail. No? Maybe it’s an English thing, but i’ve seen them all over the place this year. Well, it’s all fairly low key, until, that is, Freddie enters the scene.

It was 1991 when Freddie Mercury died, and i can remember exactly where i was when i found out: sitting on a bus in the winter sunshine. It was a sad day. As you may know, i love music, but Queen holds a special place as the very first album i bought was Queen II, from the Woolworths bargain bucket (as i write, i realise that this may be a very English story: bear with it).

Well, time passed and a tribute concert was arranged: i was there too, because some dear friends won a ticket in a radio competition and gave it to me, knowing i was a huge fan. Then more time passed, Queen released a new album, then a collaboration with Paul Rogers, i saw them play many times and Freddie’s legacy was slowly set in bronze and stone. We all miss him.

So it was with some surprise this week that i read about Freddie causing ructions in Norwich, a sleepy corner of the UK (forgive me Norwich, i love you but it’s true). You see, Norwich has a charity fundraising venture on at the moment involving decorated gorillas, and one of them, ‘Radio Go Go‘ is decorated as Freddie. Which was all well and good until the Freddie Mercury estate wrote to ask that it be removed as the distinctive yellow jacket it was wearing is copyright to the estate.

Cue the type of social media crisis that the world faces in the Social Age. You see, things are no longer simple. For a start, what was probably seen as a private conversation suddenly became national news, and what may be viewed by some as copyright and legality is viewed by others as friendship and fandom, about fun and meaning. And all of this happens in an age where amplification counts, where stories run around the world and where ease of communication subverts traditional hierarchies of access, leading to yesterday, when someone told Brian.

So, whilst the world has been turning and the years have gone by, whilst Freddie’s memory lives on, Brian May has been busy. For starters, he had carried on playing, notably on the roof of Buckingham Palace for the actual Queen, as well as in Hammersmith for me. But he also went back to university to finish his PhD, transforming into Dr May, astrophysicist, friend to Patrick Moore and cult hero to us all. Or at least all of us who appreciate a man who built his first guitar with his dad out of the fireplace.

Yesterday someone told Brian what has been happening in Norwich, how Freddie the gorilla has been taken away and quarantined, and how people aren’t happy about it. Brian has tweeted that he will ‘look into it‘.

Now, Dr May is not a man to be trifled with: when he says he’s going to look into something, you can be pretty sure it will be thoroughly looked at, possibly through a telescope.

So what’s going on?

On the one hand, you have the formal conversation, about copyright and ownership. On the other, you have a national treasure, an icon, being used to raise money for charity. All taking place in a social space, where facts may be less important than what gets amplified (even Brian’s commitment to ‘take a look‘ made the front page of the BBC).

The story is being written as we speak: the meaning is being created in the moment, emotionally as well as legally. This is typical of the Social Age: the rules are not clear, or rather the rules may be clear, but our desire to interpret them may be changing. And these stories can play by odd rules: in this case, it’s hard to find the villain.

It’s not dear Freddie for sure, nor is it the chap who painted him, who is a huge Queen fan. It’s not Norwich, and nor is it the charity that they’re raising funds for. Initially, it’s the Freddie Mercury estate, but Jim Beach, who wrote the letter, is a part of the Queen legend and surely not a villain (the Mercury Phoenix Trust raises funds for HIV research), and you can bet your bottom dollar that the villain isn’t Brian. Brian is the guy who vanquishes villains with the Red Special. So we have a story played out in the politest of terms: the organisers don’t want to criticise the estate, the public want to love Freddie, everyone respects all the charities, everybody loves Brian, who’s kind of stumbled into it, and everyone wants the gorilla to come back.

3 Responses to Can Brian May save the day? Apes, astrophysics and the perils of the Social Age