Leadership: A Matter of Belief?

I have been working on a new research project that explores the role, and evolution of, ‘belief’ in the context of Leadership in the Social Age. 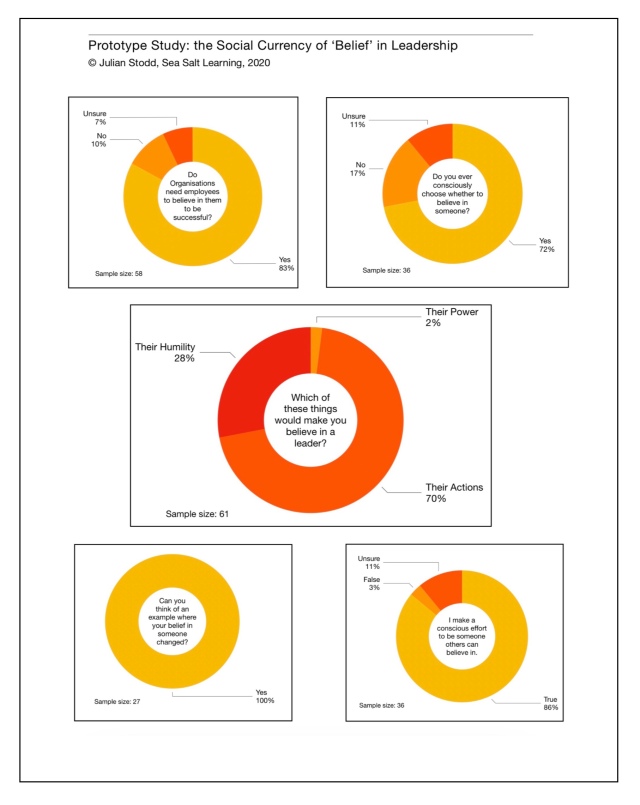 The premise is simple: we have parallel modes of engagement, the first being contractual, and the second being social. Our contractual engagement is held within the formal system, codified in our employment contract, and backed up by a legal and financial framework. The second is a little different: held within our social structures, flowing through social currencies such as trust, gratitude, reputation, and belief, and operating largely beyond money.

In that language, our utility is bought for money, but our trust, belief, or reputation, are earned through action. So leadership could be viewed partly as the action of creating spaces for belief to be invested within. And overall, engagement can be seen as a currency that is invested on a discretionary basis, where it is earned.

I have been building out some prototype research questions around this, and today am sharing an early reflection on that: note that the sample sizes here are quite small, so this is really just to inform my thinking and test questions more than intended to give any really solid results. Nonetheless, i think there are some really fascinating areas to build upon.

The first question is simple, ‘Do Organisations need Employees to Believe in them to be Successful?’: 83% said ‘yes’. Of course, the question itself is really one of belief: do you ‘believe’ that this is the case. It’s not measuring whether Organisations really need it, but rather whether people believe that they need it. And clearly they do, which may make it a legitimate area of study. 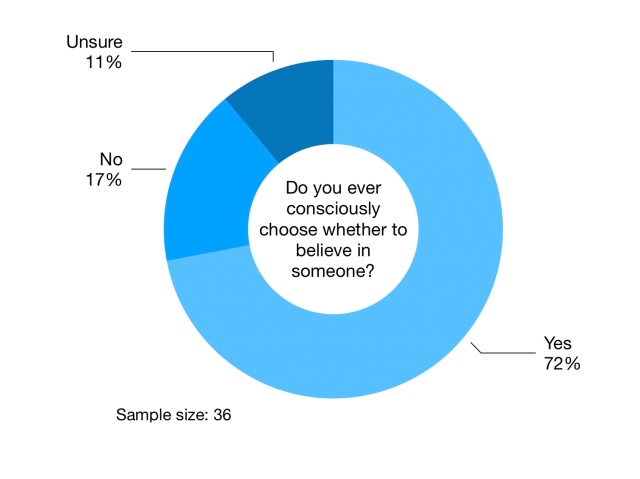 Secondly, a question which asks if people consciously choose whether to believe in someone: again, not that this is about a conscious reflection on that, so the figure of 72% who say ‘yes’ indicates that when asked to think about it, we tend to believe that the investment of belief is a conscious activity. In reality (and something to explore further), we are influenced by many totemic, contextual, and cultural factors. So e.g. one could ask people if they are more likely to invest belief in a skateboarder, or a nurse, where respective ‘uniforms’ carry imbued context and meaning. Still: in at least some cases we ‘believe’ that belief is a conscious decision, which indicates that it is worth us trying to consciously earn it.

I found this question the most fascinating: nobody chose ‘their words’ as an answer, but 70% said ‘actions’. Possibly no surprise, as this is a cultural trope, ‘actions speak louder than words’, so we may simply be hearing an aspiration of how we wish we invested our belief. Or, it may be true. Perhaps we really do judge people on their actions: my caution is that in my own Landscape of Trust research, we saw that ‘trust’ is often projected onto others, irrespective of how they behave, more a matter of blind belief rationalising erratic actions up until the point of failure. Still: it makes you wonder why we worry so much about the words of leaders if it really is pure action than counts.

Humility is very interesting: in previous research i have seen that ‘authenticity’ rates very highly as a desired feature of Social Leadership, which may be related. I am excited about that as i have further research and a book about Humility coming later this year.

Most people (86%) said that they make a conscious effort to be someone that others can believe in: if it’s true that we feel belief is invested more based upon actions than words, then this indicates that people behave (or seek to behave) in ways that encourage belief. One could ask if that is demonstrated in the observed Organisational cultures that we see around us, or if it fails between aspiration and action. 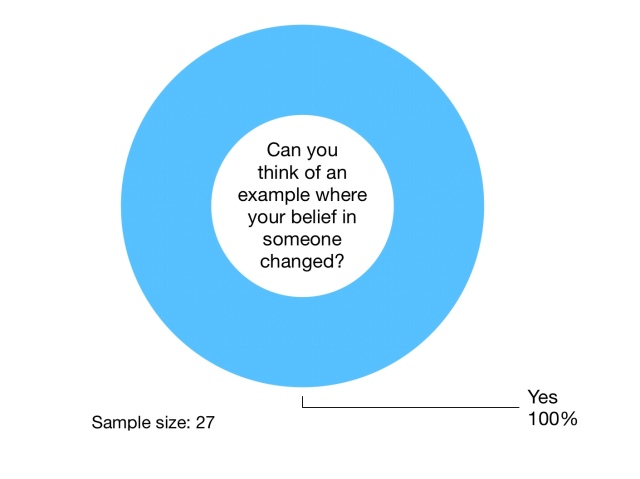 No surprise that 100% of respondents could think of an example where their belief in someone has changed; this simple reinforces that belief is a tradable currency, and one that we would do well to understand further.

Author and Founder of Sea Salt Learning. My work explores the Social Age. I’ve written ten books, and over 2,000 articles, and still learning...
View all posts by julianstodd →
This entry was posted in Leadership and tagged Belief, Leadership, Social Age, Social Leadership, Trust. Bookmark the permalink.

5 Responses to Leadership: A Matter of Belief?