Landmarks of the Social Age [5]: Inequality

Posted on October 1, 2020 by julianstodd

I am completing the final draft of ‘The Social Age Guidebook’, and sharing the chapters and new illustrations as i go. This one considers ‘Inequality’, and notions of distribution and fairness. As ever, this is imperfect and evolving work, shared as part of #WorkingOutLoud. 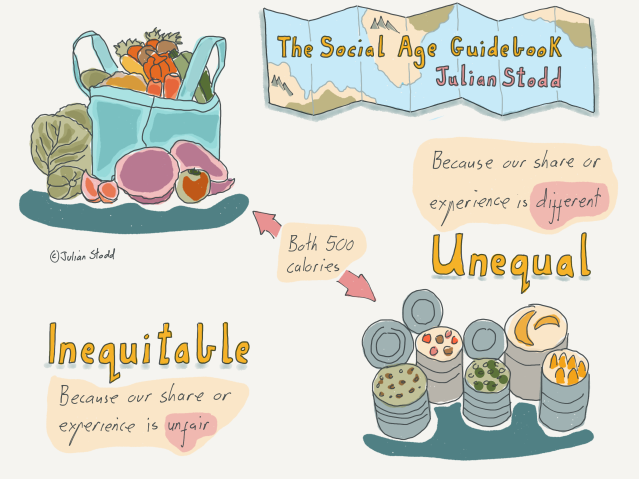 In the radically connected context of the Social Age, we have the potential to visualise, and address, inequality. Indeed, we have a duty to do so if we wish to create both Organisations, and a broader society, which is equitable for all. Worth also remembering that if we do not choose to address inequality as a dimension of leadership, then we may be held to account on it by a socially enabled community that surrounds us.

Whilst the Social Age provides many with increased opportunity, and a general rebalancing of power, that distribution is not equally distributed. Some people are doing radically better, whilst others are radically disempowered, or simply left behind. As the driving force of the Social Age is the underlying technology, simple lack of understanding, or lack of the vocabulary of usage, may leave us without power or the potential to engage. But more is at play than simply technology: both opportunity, and reward, for engagement may be unequal.

The semantics of inequality can muddy the water, so let me posit a foundation: i do not expect everyone to agree with my exact usage, and that is why i am sharing it. In a Socially Dynamic system, we will take comfort not only in our different interpretations, but in the ways we can share our stories and evolve them.

Let’s start by setting a foundation around ‘inequality’, and ‘inequity’.

Equality is a description of similarity: is the bag of groceries that i claim myself ‘the same as’ another one that i give to you. Equity is a description of fairness: whilst my groceries are ‘organic’, and ‘artisanal’, your budget bag contains the same calories, and essentials for life. And i gifted it to you. We will both be nourished by our dinner, but mine may taste better. Our respective dinners represent an inequality, they are not the same. But do they represent an inequity? Is the difference fair? Especially when you consider that i bought mine myself, and then i bought yours and gifted it to you. Is our situation unequal, inequitable, or neither? Is it fair?

In general, through this piece, i will use the term ‘Inequality’ to describe unfair distribution, with a recognition that not all inequality is inequitable. My justification for this is the context of my exploration: primarily, i am considering whether the distribution is ‘fair’, and the broader role of fairness in the context of the Social Age: and that captures my concern above. We can get so caught up in the semantics of the conversation that we fail to find fairness in our actions, or the broader makeup of society.

With that behind us, there is a core tension to explore: in the Social Age we are seeing a general rise in the demand for ‘fairness’, alongside a general increase in levels of inequality (and almost certainly increased inequity). Both are related, and this is an exploration of precisely how.

Social Collaborative Technology allows for the proliferation of stories: it breaks down the barriers between what is known to me, and what is beyond my sight. Whilst historically space has been separated, sanctified, according to structures of power, today those barriers are being eroded and bypassed: we ‘know’ more about the distribution of wealth, power, and control, then we ever did before, and stories of inequality spread ever faster.

Perhaps one factor in this is the fragmented bedrock that has led to the emergence of the new Trans-National Organisations, and elite master caste. The billionaires, tech wizards, are a very visible manifestation of this evolved ecosystem, and their prolific wealth has been gained not simply through individual brilliance, but by aggregating globalised, connected, features of our ecosystem that have allowed them to compete at scale (Amazon in the book and music industry, into the wider world of commerce), colonise emergent niches that are free from competition (Twitter, Facebook etc, both creating their own marketplace), redefine their space of operation (PayPal and eBay, evolving their marketplace), and proliferate at scale and speed (Musk and Bezos, leapfrogging into broad and diverse spaces, from tunnelling under mountains, to visiting the mountains of Mars).

This global disruption of markets, alongside the visibility of wealth and distribution, has led to a series of clearly defined narratives of inequality: unfair tax regimes, and avoidance/optimisation, being recognised as unfair; radical multipliers of wealth from the CEO down to the cleaners, and a recognition that ‘fat cat’ payments are abstracted from directly contributed individual value; emergence of aggregated movements (#BlackLivesMatter, #MeToo etc) that surface and substantiate core inequalities of opportunity and lack of common justice; supply chain visibility, which has led to wider recognition of the dark substrata of manufacture, and the role of environmental degradation and unfair working conditions in producing our first world utopia; generational impoverishment, often from industrial age population settlement patterns to Social Age ones, with concurrent dereliction and decay. And so on and so forth: our visibility of inequality is ever greater.

Alongside this greater visibility comes a parallel movement: the discretionary nature of investment, and the increased spaces in which to spend this currency. In my broader work, i talk about ‘functional engagement’, and ‘invested engagement’. Broadly speaking, money buys you ‘functional’ engagement, but something else will encourage ‘investment’ [See ‘The Socially Dynamic Organisation’, 2020].

Functional engagement is where i will use the skills you have paid for to do the job you have asked me to do.

Invested engagement is where will choose to invest something beyond that which money can buy: i will invest my creativity, my uncertainty, my risk, and by doing so, may help the Organisation to become more innovative, to achieve momentum through change, to become more effective at scale.

But the price for that investment is not money: it’s probably a whole host of forces that moderate it, but fairness is one of them. In Organisations with high levels of inequality, the decision to invest may go elsewhere. It’s not that we lack places to invest our surplus energy and effort. Again, social collaborative technologies allow disparate opportunities for investment, most of which are separate from, or distanced from, our workplace.

Inequality carries multiple levels of risk: for Organisations, a lack of fairness may lead to purely functional engagement, and for broader society, inequality may lead to a very real fracturing of what ‘society’ actually means. Indeed, it’s possible that we are on the verge of a wholesale rewiring of our core modes of Social Organisation (see the chapter on ‘New Citizenship‘), and clearly we are in the midst of righteously driven generational battles around the legacies of inequality on racial and ethnic lines. Put simply: our society is broadly neither equal nor equitable, and change is afoot.

But for now, it’s important to recognise that inequality carries two costs: one is the opportunity cost of ‘investment’ that goes elsewhere, and the second is the cost to society, a core ethical cost, whereby we fracture fairness itself. If we fail to be fair, it invalidates the success that is accounted for in money alone.

There is one aspect of inequality that is particularly significant, leading as it has to the generational unfairness that characterises many societies, and that is the reframing effect that it has on future context. if you earn less than me today, then that does not simply impact your actions and opportunities in this moment: it constrains them in future ones too. Unequal access to eduction leads to lifelong, and then generational, impoverishment. Unequal access to healthcare, technology, justice, or power, leads to an ongoing reframing of potential and outcome. Inequality builds to inequity.

In other words, those who have more tend to gain ever more, and those who are left behind tend to lag ever further behind. To repeat, inequality is not isolated, it’s interconnected.

In the context of the map of the Social Age, inequality itself is not new, but the broadening nature of it is significant, and particularly the visibility and impact of it. Mechanisms of aggregated, social amplification, and claimed voices, mean that it’s ever easier to call out inequality where we see it.

I walked past Macys in New York last year, and parked over the road was a van with a giant screen on the side of it, sharing messages of unequal pay and treatment of warehouse staff. Rented, i assume, by an organisation representing them. In the context of social amplification, the alleged inequality is aggregated, and reflected back to the Organisation, in a synchronous manner, and that synchronicity is a real feature of the Social Age.

It’s easy to visualise a rose tinted view of the revolution that is consuming us: technology carries us forward, some visible social movements seen to be driving real effective change in historic inequalities of power and voice, and we are generally more connected at scale. And yet there is nothing inherent to mean that this make us more equal. Some of us, maybe, but not all. And that’s the challenge: there’s no such thing as ‘nearly equal’. For everyone to be held safely, nobody is likely to get everything that they desire, and yet when a few gain a lot, the many may lose out.

It’s certainly true that many features of the Social Age enable individuals, and Organisations, to claim a great deal. But there is nothing inherently right about that. We are all members of one society, and for society to be civil, the gains of the few must be balanced by the well-being of the many. Not necessarily equality, but certainly equity. And where inequality exists, there must surely be hard boundaries of effect. Some inequality is intolerable, such as that enshrined in inequality based on gender or sexual preference, on race or identity. In these contexts, ambiguity and inaction cast a long shadow, which degrades our notions of society at a foundational level.

Society is only civil if we make it so.

Inequity runs a risk that we simply codify and structurally embed a system that is unfair, although unless we pursue a model where everyone earns, and has, the same (both wealth and opportunity), then that is our most likely outcome: society where wealth and power is held unequally, but within a framework of broad equity. Although the question of what exactly an equitable distribution is cannot simply be left to those empowered by inequality!

It’s easy to build a society that works for a few, but to build one that works for us all, we must hold notions of equality near. Inequality drives unfairness throughout the system, and if left unchecked, uncorrected, may lead to drastic consequence.

What you need to know

What you need to do