Anna is a member of the small Strategy Tribe in her Organisation: she comes out of a weekly meeting, held in the reconfigurable Hub, and meets Neharika for coffee. Virtual coffee. She shares the story of strategy that her Tribe have spent the morning shaping, and Neharika bids for the work to turn that into a project. The price she negotiates is not in money, but rather opportunity for the Apprentices in her Guild. 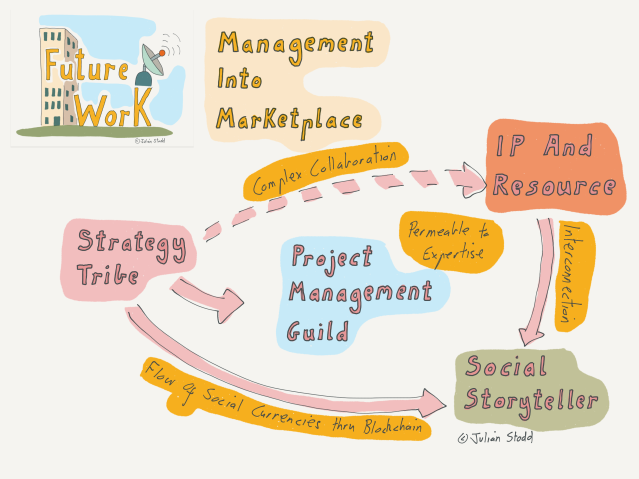 Neharika is a member of the Project Management Guild, which long ago divorced itself from any particular Organisation, and now inhabits a shared space between the top 100 Organisations globally. Alongside a Cyber Security Guild, emergent and fluid teams self organise to structure and translate Strategy into projects, sometimes for money, sometimes for other currencies. These negotiations can include Sabbatical opportunities, where members are loaned between Tribes and Guilds for extended periods, partly to build capability, but also to ensure a strong social fabric and shared understanding.

Anna chose Neharika for this negotiation because, although they have never collaborated before, they are both members of a Coin Network: a blockchain based currency of trust, this particular one of which holds quantified reputation. Neharika’s strong work in the past has been captured in a reputation that she can trade within a gated community.

Neharika determines that they will need a set of assets for this project to succeed: some physical assets, and access to some IP. She shares this with Anna, who recognises a problem.

Don, who controls the IP required, and she have a longstanding dispute. Don controls the IP because he earned equity in it by challenging a previous product owner: he presented his evidence and solution to a committee of IP alumni and was awarded a controlling stake as his challenge was deemed fair, and likely to increase overall value to the community.

Anna recognises that Don will not give her access unless they can somehow quantify their differences, so they agree to contract Selena, a Social Storyteller, to help them: their role is an evolution of the Coach, but who typically works in conflicted spaces to write stories that capture exactly what people disagree on. This mechanism of storytelling can allow teams in fragmented cultures to agree contested space, and also space of limited cooperation. Sometimes they choose to contract currencies of disagreement, essentially codified favours for the future, options to be repaid against future work.

With strategy aligned to resources, and a truce with Don, Anna is able to deliver on her commitment to her Tribe, generating market share and significant profit.

Everyone is happy: shareholders receive a dividend, which reflects a bonus paid because the project had a high social component (the apprentices got valuable experience). Anna, Don, and Neharika’s teams and tribes each received both monetary payment for their time, but also determined, and allocated, social currencies.

Anna minted a coin of recognition for Don, which she coded with ‘gratitude’. Don minted a coin of recognition which he coded with ‘respect’ for Anna, in recognition of her work to help write their Story of Difference. Neharika traded her coin for a dollar bonus, as her Guild required cash for conference and already carried high value in social currencies, recognised in the blockchain networks. Their judgement was that for now, money was more important.

Selena carries their story forward: both the Story of Difference, but also their Story of Success, to their monthly Campfire. At this virtual event, the story is shared, and awarded both ‘challenge’, and ‘recognition’ by the global teams. The project is then debated, to ‘sense make’ it, and lessons are captured in a Wiki. Mistakes are explored, and analysed, then memorialised, so that they are not carried forward. The Organisation hosts a Museum of Failure, where these memorialised stories are lodged, and anyone can visit, to explore.

This is the first of my #FutureWork stories. These are deliberately imperfect, and i am making no effort to ensure they are consistent or aligned. These are fragments of thought that may root or take hold.

This Organisation has evolved in key ways:

This type of Organisation exists where managers cease to own and deploy, and move to scope, enable, and trade.

This story is not intended to be your answer: it is intended to inspire answers. If we are afraid to change, we will fail.

“Management into Marketplace – we come from a place where managers, within hierarchies, organise and allocate resources (human, intellectual, and material) to achieve known mechanisms of production. The evolution will be into the Organisation as a marketplace, where leaders may bid for teams, where self organising teams or Guilds will own their own development and where productivity may be more creative, but also more consensual, with rewards negotiated according to success or urgency.”

Author, Artist, Researcher, and Founder of Sea Salt Learning. My work explores the context of the Social Age and the intersection of formal and social systems.
View all posts by julianstodd →
This entry was posted in Future, Learning and tagged Future, Future Work, Futurism, Leadership, Story, Storyteller, Work. Bookmark the permalink.