Mending the Net: a Story of Culture

The past and the present, the old and the new, these are convenient ways to parcel out our time, to present separate and distinct narratives around what came before, and what replaced it. We use these terms both to describe the change we have experienced, and to outline the change that we aspire to. But what if the truth is a little less clear: what if there are few sharp dividing lines, but rather a simple tipping point at which we come to believe in a new truth? What if the ‘new’ is simply a patchwork of various ‘olds’, held together with some new thread, told as part of a new story? 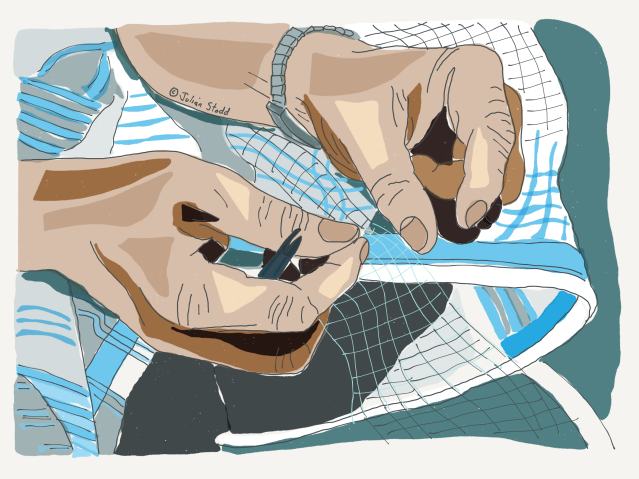 Last week i spent some valuable time with a dear friend who works far up in the North of Canada, working alongside Indigenous communities that have had aspects of their past taken away from them: through both Colonial, and post Colonial periods there have been structural attempts to fracture language and, hence culture, to sever the links to the land, and to impose market economies and legal systems onto people whose belief systems do not neatly aline to the newcomers.

The result is an uneasy truce: groups who are restless, but detached from their heritage, their landscapes, and their sense of place. The result are communities with high levels of suicide and mental health issues, held in a space that does not lack money to resolve it, so much as imagination and vision. People who do not fit in a convenient modern space, and are an inconvenience to the narrative of Canada today.

My friend told me a story: she had been teaching a class when one of the community Elders had asked her if she could help. He was fixing up his fishing net, and needed an extra pair of hands. Whilst he worked, he explained how the nets needed tending to, and how this particular net was both very old, and very important. Indeed, this net had been part of the foundation of the modern village.

It got me thinking: the net, and the story of the net.

Nets are almost a metaphor for ephemerality: nothing but string, and yet so much more, almost impossible to draw, because the ‘thing’ that they are is the space that they divide.

A net is an artefact almost entirely define by purpose, with a purity that we often engineer out of systems as we refine them.

And nets are cultural artefacts because the knowledge to make them is typically passed on by generation, through those cold afternoons sat outside, observing, questioning, trying.

The knowledge of how to mend the net is, like much of the cultural knowledge that concerns the Indigenous Communities, not something that can be taken for granted: today my friend’s students learn how to hunt and trap, to skin and cook, but also how to use iMovie and write blogs, to make great music, and to do maths. But it’s a patchwork.

I do not know how to mend a net: conceptually, i get it. It can’t be hard. And yet i lack the lifetime of experience, and the generations of wisdom that sit behind the knot.

No problem, i might say: i do not need generational knowledge to tie the knot. I am pretty sure i can find it on YouTube. And indeed i may be right. I can learn to tie a knot. But can i learn to mend the net? The net that started life at the birth of the village?

Philosophers love a question like this: Odysseus’s boat lay on the shore where he had abandoned it, patched up every year with a new timber and some fresh paint. But still Odysseus’s boat. What makes the thing the thing?

But i do not know how to mend the net.

Culture is complex, and yet utterly simple: if you drive a pickup truck, eat a Big Mac, and wear Adidas, then those are aspects of your culture. If you lose the ability to speak or write your ancestors language, then that too defines your culture. The language itself is not culture, but the way that meaning is carried in words is. And different words may not carry the same meaning.

So i can learn to mend a net, but i cannot YouTube the experience of learning it with the village Elder. And even if my net is functional, it may not be culturally coherent.

I could carry the net to Toronto, or London, and tell the museum curator that it’s a valuable artefact. We could employ a researcher to identify traditional knotting techniques, and a specialist conservator to tie the threads. We could even pay for an authentic ‘village elder’ to fly in to run a seminar on ancient nets in our air conditioned theatre. And at the end we could display a fully functioning net within an inert gas environment, in a sealed glass case, where it would live for ten thousand years. But it would not be the net that founded the village.

Context, for culture, is everything. And the thing about context is that it is not purely about utility.

I could pay the villagers for all their old nets, throw them out, and give them all new orange nylon ones. Ones that do not break. But what would be lost? As utility grows, we lose something else.

But i do not know how to mend the net, and am not willing to learn: for me, it’s easiest to buy a new net. The net is not part of my culture. So i enjoyed the story, but i’m not willing to invest in carrying it forwards.

And should i ask others to do so? If we send the teenagers in a structurally impoverished village out to learn how to mend nets are we helping them to retain their culture, or are we creating a museum-piece of fragmented culture? And would they have been better off learning programming or Mandarin Chinese? If there is a cost of culture, who should pay it?

There is a reason that you and i drive pickups and wear adidas, or whatever our local flavour of that looks like. So by what right or expectation would we ask others to put up with less? Do i want to see people wear ‘traditional’ garments, speak old languages, and skin rabbits to make me feel better?

I guess it depends on the type of society we want: a homogenous one, given to us by Netflix, or a personalised one, gifted to us by our ancestors.

When things fall out of culture, they fall into history. And when history no longer has use for them, they fall to dust and ruin. Archaeologists can tell you about ‘ritual scatters’ of stones, which is a way of saying ‘we have no idea what this means, but it clearly meant something to someone’.

There is a difference between needing to mend a net, for utility, and having had the experience, at least once in your lifetime, of mending the net, especially if it is the net that your village was built upon. Because that’s the thing about culture: if we do not invest in it, then it is just someone else’s story.

I do not know how to mend a net, but i surely wish i had had the chance to sit and help to mend it. Because even though the net is not part of my culture, i feel that the stories it carries would enrich me.

Author, Artist, Researcher, and Founder of Sea Salt Learning. My work explores the context of the Social Age and the intersection of formal and social systems.
View all posts by julianstodd →
This entry was posted in Community, Culture, History, Learning, Social Learning and tagged Archaeology, Canada, Community, Culture, Net, storytelling. Bookmark the permalink.

9 Responses to Mending the Net: a Story of Culture