Aspects of Learning, Rehearsal, and Performance

Yesterday i provided an overview of how a Socially Dynamic Organisation will retain three clearly differentiated spaces, each of which is adequately supported, led, and engaged in, both by formal leadership, and individual members. The ability to hold these spaces in both mindset, and behaviour, is central to the ability of the Socially Dynamic Organisation to move from aspiration into practice, and to build a learning culture (a culture that learns, not one that specifically ‘does’ learning to others). Today i will build out one part of that, with a reflection on aspects of each of the three spaces. Before i do that, i will share a couple of notes around this framework. 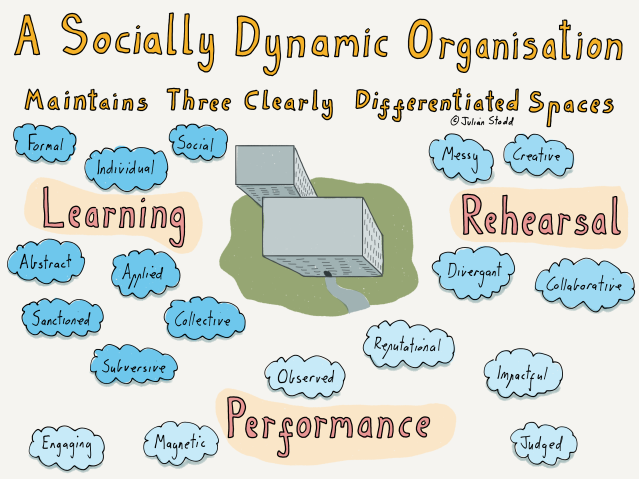 Firstly, the idea of spaces is both conceptual, and potentially physical: you may be able to achieve this result by holding these spaces in mindset alone, or it may be that certain spaces are physically defined. In some contexts this is obvious: branches or retail outlets are clearly spaces of performance. The point is that Learning, Rehearsal, and Performance is about more than simply structured opportunity as part of formal learning: it’s about an almost hourly ability to recognise the space that one inhabits, and to ensure that we consciously vary that space. So right now, are you learning, rehearsing, or performing? And if this is ‘learning’, then where will you have the space and opportunity to move it into rehearsal, and who will support you in that? 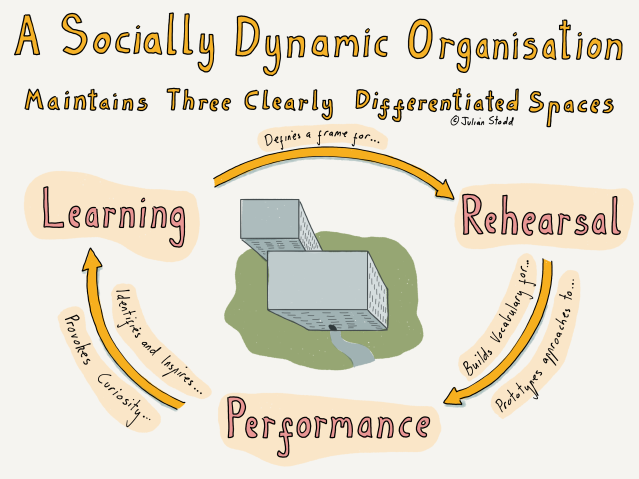 Secondly, and to repeat what i said yesterday, this is an abstraction: i am well aware that ‘learning’ blends through both the collection of knowledge, the synthesis of meaning, and even through performance itself. The illustration above (itself an abstraction, i know!) attempts to clarify that. But the point is that it is not enough to say ‘we are always learning’. Certainly we always have the opportunity to learn, but without clarity and support through rehearsal (and indeed clarity about exactly what ‘rehearsal’ is), we are unlikely to carry that learning through to Performance.

I’ve captured some thoughts around each area, which i will now expand upon.

Learning comes in many shapes and sizes: FORMAL learning, packaged and provided by an Organisation, or procured from outside, where the typical model is transfer of knowledge, and demonstration of behaviour, as well as a great deal of context setting. Formal knowledge provides the foundations for Rehearsal. INDIVIDUAL learning i have differentiated in that ‘formal’ is often signposted or sanctioned by the Organisation, whilst ‘individual’ is motivated and sanctioned by you yourself. For example, i am learning to juggle (again), with no formal remit whatsoever.

Both Individual and Formal learning may be SOCIAL: i use the term here to cover any learning in which the tacit, tribal knowledge is included, and where aspects of collaboration and co-creation (the creation of new knowledge, or discovery of socially imbued meaning, is central to the experience).

Under both Individual and Formal models, as well as Social delivery, learning may be INDIVIDUAL or COLLECTIVE: it’s possible to access and contribute to Social learning without engaging in actual conversation (asymmetric programmes for example).

Finally, any of the above may be SANCTIONED, or SUBVERSIVE: Sanctioned in that you are signposted or permitted, and Subversive in the best sense of the word. To subvert outdated knowledge, system, or process.

Again, in a rather abstract view, we can see those aspects of Learning as the way that knowledge enters the system, but what we do with it takes us into rehearsal.

At heart, Rehearsal should be MESSY: it’s not about the conformity that would power unified assessment, but rather about building out your own vocabulary and understanding. I typically use that language of ‘vocabulary’ to describe not simply spoken language, but the vocabulary of behaviour. Typically this involves prototyping, and the opportunity to gain feedback. Without this, we will hold ourselves safely: if the space is not permitted to be messy, it will be tidy and safe. But tidy and safe is a risky place to be, because it does not permit us to explore new ways of thinking and operation. 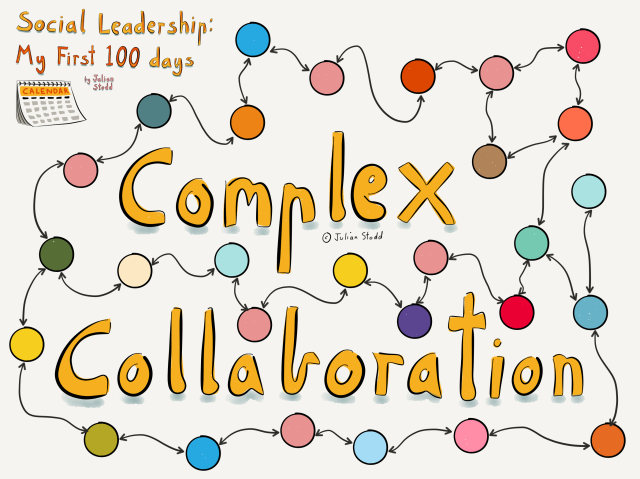 Within Rehearsal spaces we are looking at CREATIVITY, not an expectation to have the right answer first time, but to explore potential different ways of finding answers. DIVERGENCE is important here: if we wish for standardisation, we should stick to formal learning and rigid assessment, but if we wish for a broad based strength, we need active rehearsal space for Divergence and challenge. The ways that we COLLABORATE here are important: is it simply in known and safe ways, or through Complex Collaboration with those people we do not fully agree with.

Rehearsal may be best define by what it is not: it’s not abstract learning, but neither is it visible performance. It is where we learn to bridge the gap between those two. Without it, we will likely persist with what we did before.

Performance is an ENGAGING activity, MAGNETIC, if we do it right. Performance holds pride, both in our own actions, and in supporting others to be excellent. It is OBSERVED as a rule: we do not Perform in secret, and hence Performance is linked to Reputation (another reason why Rehearsal must be separated, to disaggregate it from Reputation, and hence individual risk). Performance is IMPACTFUL, and JUDGED upon that impact, so it is high consequence, and hence highly permanent.

Indeed, another way of looking at this is to say that Rehearsal is low permanence, and low consequence, whilst performance is both observed and judged, and hence higher impact upon your reputation. 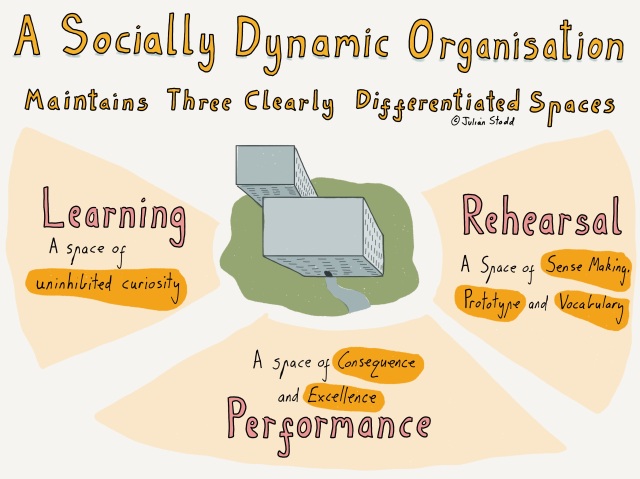 To some extent, the words that i use are not important, in that they reflect my understanding, and do not have to define yours. Key though is that active process of thought, both in the design of learning, and in considering broader Organisational Culture: how will you separate spaces, what Leadership behaviours are required in each, and to look at that question through the lens of the creation of meaning, individual behaviour, and managing consequence.

Author, Artist, Researcher, and Founder of Sea Salt Learning. My work explores the context of the Social Age and the intersection of formal and social systems.
View all posts by julianstodd →
This entry was posted in Learning, Performance, Permanence and tagged Consequence, Leadership, Learning, Performance, Reflection, Rehearsal. Bookmark the permalink.

5 Responses to Aspects of Learning, Rehearsal, and Performance