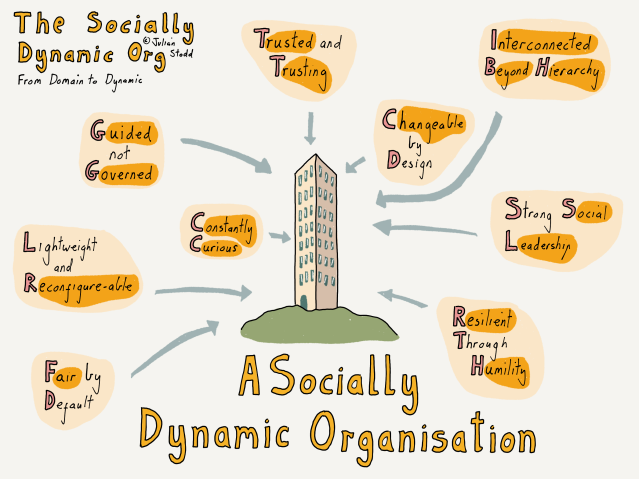 ‘Guided not Governed’ – a central realisation is that our future Organisations will be less about the governance of hard power, and more about the invested engagement, discretionary effort, and willing support, of the workforce. Essentially those Organisations that thrive will do so because of the engagement and energy of a highly connected population who have elbow room and space to operate. In that sense, the role of leadership will shift from predominantly one of governance, to one of facilitation and enablement. Or guiding. We could argue that good leaders have always done this, which is true, but in aggregate the experience of employment has typically and ultimately, been one of subservience to the system. Whereas in the future it is more likely to be predominantly about choice and investment.

‘Trusted and Trusting’ – two very different aspects of this complex social force: Domain Organisations have excellent structures of formalised trust, through contract and hierarchy, but are not necessarily trusted at scale, and do not necessarily demonstrate trust in their actions. Or at least do not do so with consistency, which is a requirements of trust for many people. The Socially Dynamic Organisation will excel at trust for several reasons. Firstly, it will trade in multiple social currencies, not just one financial one (understanding Social Currencies is central to understanding the social Organisation). And it will understand that trust is contextual, and held primarily through authentic action: so it will excel at creating space for authentic action!

‘Interconnected Beyond Hierarchy’ – within the Domain Organisation, hierarchy carries power and control, but can separate us tribally and globally. Interconnectivity is an important notion to follow, the ways that we engage not simply into known spaces, but unknown ones, and not simply in comfortable ones, but across our differences too. The word ‘interconnectivity’ is one of the most important ones to explore in our efforts to understand and build more Socially Dynamic spaces. It is through stronger interconnection that we can build social movements, and unlock Individual Agency at globally local scale.

‘Strong Social Leadership’ – i have described how our challenge is to keep the best of the old, and unlock the best of the new. So alongside the formal power that allows us to achieve effect at scale sits the social authority that enables us to safely invest. Social Leadership is reputation based authority: the Socially Dynamic Organisation will have both. Strong formal leaders who earn high social reputation, and strong Social Leaders who carry no formal power at all. A reason for this is that to build this new Organisational design will require us to give up a lot of the current things that we own: power, position, resource, control etc. We will have to hold people safely as we do so, and it is Social Leaders who will enable this to happen.

‘Lightweight and Reconfigurable<’ – our future Organisations will be less overweight than our current ones: most likely they will employ fewer people, but perversely touch more people to be effective. Through distributed networks and stronger associate and affiliate arrangements, and within the arms of broader communities. The Social Age represents an age of community, and it is likely that successful Organisations, certainly globally successful ones, will operate something akin to a citizenship model in this space. And reconfigurable because they will not simply construct a new Domain, but rather retain a constant ability to change.

‘Constantly Curious’ – this ties into the notion of the restless Organisation, one that does not seek one mode of operation then codifies it into system and process, but rather develops a deep seated ability to solve complex problems in diverse ways. Essentially whilst the Domain Organisation was effective through simplification and codification, the Socially Dynamic one will be effective through iteration and innovation, remaining in constant motion. To do so it much harder than it seems, as really excellent Organisations become constrained simply through the accretion of system and process around things, which bogs them down over time. Being restless, constantly curious, is hard. And will most likely involve a methodology around curiosity that enables it to scale.

‘Fair by Default’ – most Organisations are able to act fairly when they wish to, but the Socially Dynamic one will be fair by default. In other words, it will have to go out of it’s way be hurt people because the mindset, and authentic power, will be held accountable by the communities that it serves. That may sound like some liberal and aspirational statement, but in the world of interconnection, trust, and social authority, it’s vital. By creating a culture of fairness, we are better able to hear weak voices, better able to engage, and just simply to invest in our society rather than be a cost to it.

‘Resilient through Humility’ – i am linking two disparate concepts here: resilience, and humility, because it is through our willingness to be wrong and learn from it, to engage in spaces of difference and dissent, and to reach out to carry heavy weights with others that we can develop a greater Organisational resilience. Resilience not in the hard construct of infrastructure and network, but rather in the social ones of culture and ideas. The humble leader is one who puts others first, invests even when they have little, and shares widely.

‘Changeable by Design’ – whilst Domain Organisations change through pain, the Socially Dynamic one will be able to do so by design, simply because it will never fully root itself into the current space. This is one of the hardest tricks to fulfil: social systems inherently nest in formal spaces, forming tribes and enclaves. If we avoid nesting, we can be changeable by design. But it’s more than that: it’s about a recognition that true change is co-created, and allows everyone to both envisage, and invest in, the future state. Which really relates back to the first point of ‘guided not governed’.

These are just a light scattering of the traits that we see in a Socially Dynamic Organisation, and none of them are that hard to build in isolation. But isolated strength will not suffice. It’s about a systemic pattern of adaptation, which is what makes it so hard to build.

My own work is simply a sketch of this space, with a focus on the practical ways that we adapt: but nobody is going to give you your answers. Each individual, each Organisation, each leader, and each community, will need to find their truth. My premise it taken from models of evolutionary biology: as the ecosystem changes (the full context of the Social Age comes to bear), we must either adapt, or fail. Better to adapt.

Author, Artist, Researcher, and Founder of Sea Salt Learning. My work explores the context of the Social Age and the intersection of formal and social systems.
View all posts by julianstodd →
This entry was posted in Socially Dynamic Organisation and tagged Change, Curiosity, Hierarchy, Leadership, Social Leadership, Socially Dynamic Organisation, Trust. Bookmark the permalink.