Today i am sharing part of the work for the Modern Learning Capability Programme: this piece is an overview of Neuroscience, with a view to understanding how it may inform your personal discipline of Learning Science. Note that this is early stage work, and presented out of context, but shared as part of #WorkingOutLoud. Note also that this version does not include the footnotes that include referencing in the final book. 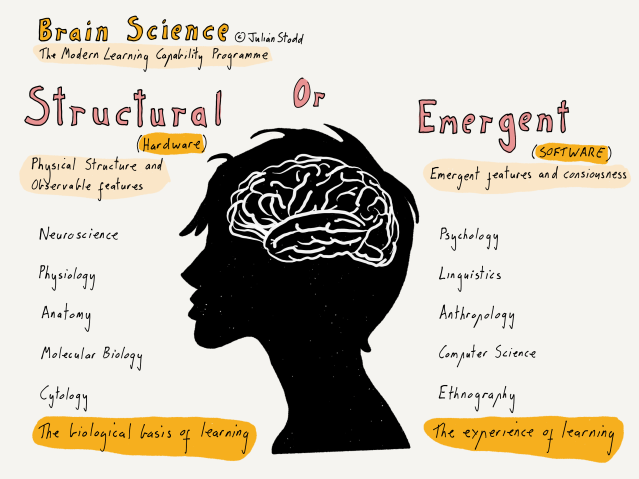 Neuroscience is the broad study of the nervous system, which provides us with the biological foundation of learning, consciousness, behaviour, memory, sensation, and perception. It is, again, an integrative discipline, which draws upon other fields.

In modern learning Organisations, neuroscience can be toted as a key that will unlock learning and engagement. It can be viewed as a torch shining light over ignorance. But it equally falls victim to totemicism, aspiration, and the projection of bias, with a belief that we can use it to reinforce existing dogma. Certainly our understanding of the brain is improving, but we have not yet ironed the magic out of the system, and it is not a deterministic science.

To best understand neuroscience, and what it can, and cannot, give us, consider again the philosophical debate about reductionism and emergentism: neuroscience can give us a view of the map, and can show some interrelationships and dependencies, it can give us a clean and effective overview of the space, but it does not give us familiarity with a landscape in the same way that hiking through it does. At best, neuroscience will provide us with a foundation for our broader understanding, and the development of our personal discipline of Learning Science, as well as more rigorous, evidence based, and hence effective, learning methodologies.

An important notion is neuroscience is plasticity: the brain is not like your car, or indeed any physically engineered and hardwired system. It is dynamically able to restructure itself, indeed, through cycles of learning, and sleep, it reinforces, prunes, and culls, different connections at will. Put simply, if the brain cannot achieve something today, it may be able to rewire itself to achieve it tomorrow: learning to juggle, reading French, and changing your mind, all evidence of this awesome trait.

The brain is highly plastic, with changes that we can physically measure: in part, our capability may be based upon innate structural differences, and in part, behaviour and experience change that physical structure itself. Some things may surprise you: you can learn a language, for sure, but you can also learn to balance better. Neither is innate, although there may be structural differences that give us a propensity to be better able to learn to do either.

But plasticity can cause us to misunderstand: for example, to see limitation where it does not exist, or to fall into the traps of phrenology. It is worth remembering that the brain is an extraordinarily fluid structure, and that, on top of that, are the correlates of learning, belief, and the creation of meaning, all of which are largely beyond science, at least for now.

Lateralisation of the Brain

Some brain processes or functions may tend to locate to one hemisphere of the brain or other, and there is an active research discipline that explores this, but latterly there has been a great move in pop culture (and related management theory) to draw conclusions that simply are not true, or at the very least are beyond our current knowledge.

You will see studies of gender based differences, even the notion that there is a ‘male’ and ‘female’ typical brain, almost all of which is soundly without basis. As mentioned elsewhere, we also see great plasticity, so functions in one person that are predominantly based on one side of the brain may, following injury or disease, migrate to the other.

It’s possibly safe to say that there are lateral relationships with function, but that they are plastic, and that, in all practical terms, of little or no use in our understanding of the practically applied business of learning and development, leadership, or change.

On a related note, we can see that almost the entire conversation about emotional intelligence is build upon quicksand: there is no demonstrated consensus of what evidence would form an ‘emotional’ intelligence, and no experimental mechanism to measure it, as opposed to other ‘types’ in any event.

It’s not to say that work on Emotional Intelligence cannot teach us anything, so long as we consider it as a theoretical framework, a way of thinking about intelligence. But it is neither deterministic, not evidence based, and hence, simply one idea among many.
Observation and Imaging

Much of our understanding of how the brain works comes from observing dysfunction: we have a large sample size of ‘normal’ brains to observe (not that there is anything like a ‘normal’ brain), but when something goes wrong, we are able to see what is lost from (or indeed enhanced in) normal function.

For example, through illness, a lesion forms in the brain of a particular patient, and that patient loses the ability to speak, although they can still sing. From that, we may deduce that the lesion is in part of the brain that governs speech, and that song is held in a different space. Or maybe the lesion simply blocks the initiation of speech by putting pressure on a different area.

Take right now: i’m sat in a cafe, typing with the sun shining onto me. I am therefore warm, and sat in the most comfortable seat, but also the screen is increasingly hard to see. I am annoyed, but not yet so annoyed to bother doing anything about it. You can consider the initiation of behaviour, or indeed much motivation, at both the cellular, and macro, levels in similar vein. One nerve firing may not initiate action, but builds a shallow foundation that others build upon. When a certain critical mass is reached, action may be initiated.

The real revolution in neuroscience has come through the advance in imaging, and measuring, technologies, which allow us to look inside in ever greater detail. These broadly divide into ‘structural’ imaging, which as the name implies, looks at the macro physical layout, and it broadly concerned with injury and structure, and ‘functional’ imaging, which seeks to understand function on a micro level, through measuring e.g. blood flow, or electrical signalling, as well as proving insight into e.g. Alzheimer’s, where changes are much more fine grained.

Examples of what neuroscience looks at