Today i am sharing a full draft chapter from my upcoming Social Age Guidebook on Apollo, which consists of a series of leadership reflections. It’s part of #WorkingOutLoud. 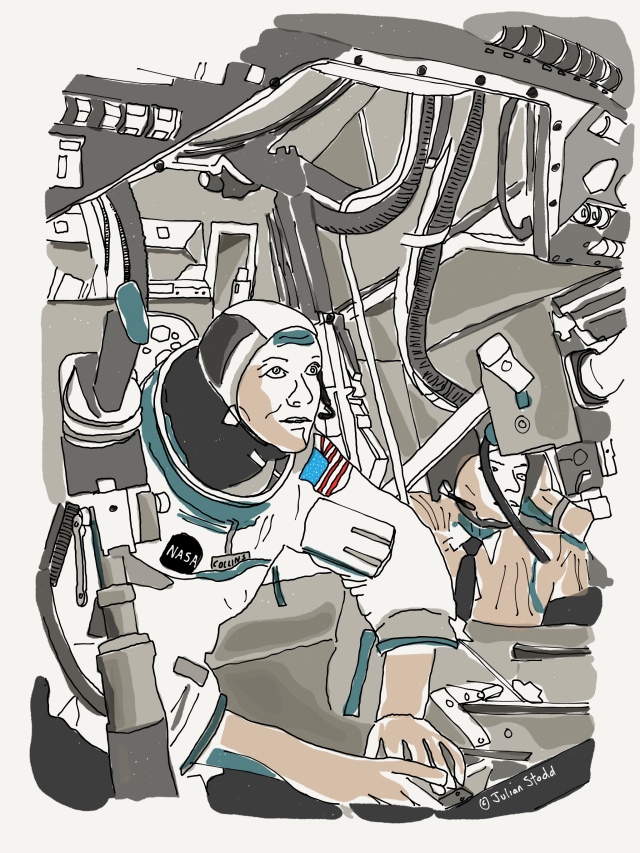 There is one discipline that Apollo progressed with remarkable vigour: developing hardware simulators and complex simulations to train and test the astronauts for what may happen, and testing their physical and mental prowess, to see how prepared they were for the challenge.

In total, the Apollo astronauts spent around a third of their training time in simulators [1]. But all of this testing was in respect of a new domain: nobody was sure quite how the craft would behave, and nobody was certain how a human would stand up to the stresses and strains of space flight.

The technical simulators served two functions: to train astronauts on the correct functioning of systems, and collections of systems, and, secondly, to build resilience per the failure of these systems.

Simulations thus tended towards the connected, or the dastardly, reflecting the dichotomy at the heart of the training: time on connected simulations allowed an astronaut to rehearse, and master, every aspect of the mission, in sequence, in an environment that as closely mirrored the expected reality as possible, time on the dastardly would test them in the ways to recover when things went wrong.

The role of the SimSup was to design these events, and he would sometimes come under criticism for creating an event so extreme, or unlikely, that it was felt to be unfair. But that is almost the point of failure: certainly failure occurs in known ways, but more often, it’s unknown, un-modelled, or complex [2]. It’s rarely timely or fair.

The Apollo Programme required the development of a full range of flight simulators, including General Electric’s Spaceflight Visual Simulator [3], which created the world’s first visual representation of a landscape on a digital screen.

The Apollo astronauts came to the programme with superlative flight skills, many from the Test Pilot programme, so all were well used to all manor of aeronautical surprises: the issues they faced though, was that space flight involves no ‘air’ once you have left the atmosphere, and all the vehicles that they were flying were new. New in terms of design, and new in terms of their sphere of operation.

Both ‘fixed base’, and ‘moving base’, simulators were created through the preceding Gemini and Mercury programmes: both could simulate inputs, and give some sense of feedback, either through spoofed system inputs and moving images or, in the case of the latter, actually moving the simulation capsule itself.

Alongside the full function simulators were a range of ‘part task’ ones, which allowed intensive training on one particular aspect of the mission.

In total, Apollo used fifteen different simulators [4] to prepare the astronauts for their missions: three of them simulated the main Command Module, two were for the Lunar Module that would go to the surface, a ‘Command Module Procedures’ part simulator just trained the lunar crew with how to rejoin the Command Module after their landing, and the ‘Lunar Module Procedures Simulator’ just trained the two moon walkers on procedures of landing and rendezvous.

These simulators were driven by some of the earliest mainframe computers: all of the procedural simulators were run from a single mainframe, whilst the Mission Simulators used networks of several mainframes [5]. One challenge that emerged was that the ‘AGC’ on board guidance computers for Apollo used a different programming language from the earth based ‘DDP-224’ simulation mainframes: to develop a functional simulation required 20 experienced IBM programmers, and still took around four months to build for each mission. Add that to the six months of training time required, and the lag was significant, and unable to handle change well.

One analyst, James Raney, thought that things could be done differently: he proposed that instead of recoding the mainframes to try to recreate every instruction on the on board computers, they could be programmed to run a simulation of the computer itself. Nobody at NASA believed that this ‘simulation within a simulation’ approach would work, but in desperation it was finally approved, and proved to be a spectacular success [6]. As well as solving an intractable and lengthy problem, Raney’s solution cost just $4.6 million, compared to $18 million for the replication approach. It’s a great example of a lone voice challenging an established frame of understanding, where the systemic resistance was held more in pride, and existing power structures of the programmers and NASA staff, than it was in evidence or technical issues.

One of the most incredible simulators was the Lunar Landing Research Vehicle, a contraption that looked somewhat like a rocket powered spider, which used jet engines to support 5/6ths of the vehicles weight permanently, allowing the pilot to ‘play’ with the remaining sixth, which should give a reasonable approximation of how the Lunar Module would feel, and behave, coming in to land.

It was this contraption that nearly killed Neil Armstrong, on 6th May 1968, a year before Apollo 11 took off: a propellent leak led to the total loss of control, and Armstrong ejected from the craft with lightning fast reactions, just thirty feet above the ground, parachuting to safety and avoiding the fireball as the Research Vehicle exploded. It was not his only brush with death.

Armstrong knew that, in theory at least, the landing computer could manage the entire landing process, bringing them to rest on the moon’s surface without him having to touch a single control. But the test pilot in him was concerned that the sightless machine would land them in a boulder field. Or possibly the test pilot in him could not conceive of missing the opportunity to be the first pilot of a strange craft in a stranger land [7]. The simulators allowed him to develop the vision and approach to handle the varied permutations of this plan. Something that proved fortuitous as, come the real landing, there was, indeed, a boulder field.

He always intended to take manual control for the last five hundred feet and, in the event the audio tapes of the Eagle landing do not do justice to the zen like trance, and dance, occurring between Aldrin (reading out the dwindling fuel), and Armstrong (unwilling to land between boulders the size of a house, and with a pilots instinct that he could clear the field).

Simulation for the Lunar Lander presented an interesting range of frames: flying the lander entirely by hand was perilously risky. Armstrong’s preferred approach would be to let the computer handle the throttle, whilst he tilted and tipped the vehicle to influence direction. But there was always the real possibility of a total failure of guidance or control, in which case he would hit the ABORT STAGE button. This would jettison the landing stage, and ignite the ascent engine, itself a risky move, as there was no way of knowing how far clear they would be of the discarded bodywork, and no time to problem solve if something went wrong: additionally, they may get back to orbit, but not necessarily anywhere near to Collins, in the Command Module, a situation that may give them a worse ending that a simple fiery, glory filled crash onto the surface itself. 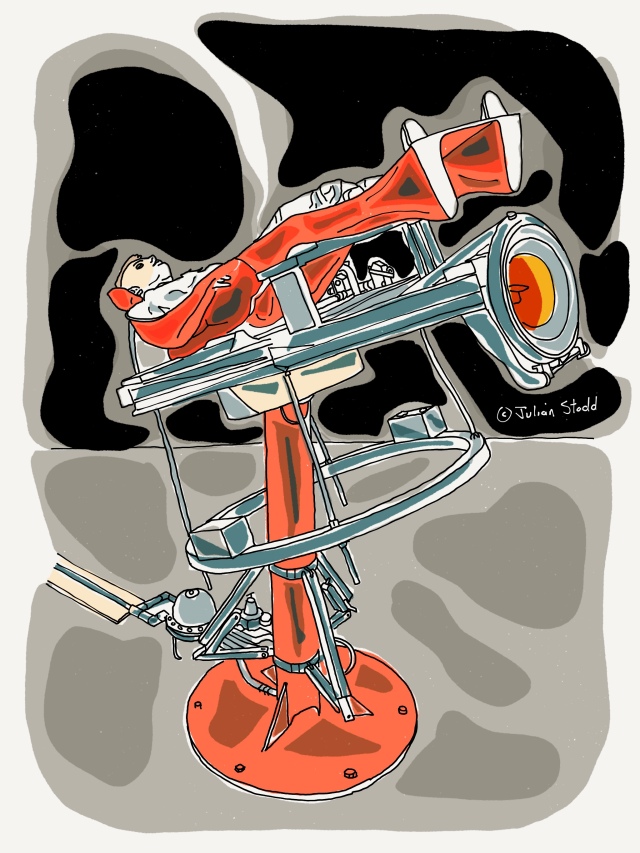 Alongside the monumental technology simulation and testing lay the human side of it.

From initial selection, through to final training, NASA doctors and engineers devised a punishing and, quite frankly, speculative or made up, series of tests. Nobody knew how many g’s (one ‘g’ is the force of gravity we feel right now) an astronaut would need to survive. The most extreme roller coasters in the world will subject you to almost 6g. Surprisingly, during launch, an astronaut will only feel a leisurely 3g or so. Unless things go wrong.

For good measure, NASA developed a centrifuge that spun the astronauts up to 20g, forces that would render the most capable pilot unconscious, as blood is drained away from the eyes and the brain. The test was unpopular, to say the least.

But necessary: on the Gemini 8 flight in 1966, Neil Armstrong and Dave Scott flew to practice rendezvous with an Agena satellite, setting up manoeuvres that would ultimately form part of the Apollo rendezvous mission plan. The early Mercury and Gemini programmes set many of the building blocks in place. But in this instance, a thruster on the Gemini stuck open, and the two mated craft started to spin: in an effort to control it, Scott threw the switch to separate them, but the now lighter Gemini started to spin ever faster. Armstrong and Scott fought for survival, until, on the verge of losing consciousness, Armstrong found focus and through fading vision was able to isolate the offending thruster.

The testing of the astronauts was not just a matter of spinning: they were probed and prodded in literally every way imaginable. Pre Apollo, there was some concern as to how astronauts would manage the human waste that would be produced: one bright spark decided the best option would be to devise a diet that meant they would produce no waste for ten days. The test subjects in this group described the results on day 11 as traumatic. Not all ideas are good ideas [8].

Much of this human testing was done in the dark: there was little idea of the strains and stresses that would assail a human body in space, so the approach was a mixture of considered planning, and wild speculation. A finger in the air.

[1] I feel sure that this figure was In Morton (2019), but it’s on my fact checking list as i cannot locate it again now.

[2] Something that Nassim Nicholas Taleb explores eloquently in his work on Black Swans, and i have previously explored in my own work on Brittle Systems and the limitations of formal hierarchy. https://julianstodd.wordpress.com/2016/05/23/the-limits-of-hierarchy-brittle-systems/

[3] In Morton, 2019, who provides an interesting review of the speculative historical literature on the lunar experience from before we actually visited the surface.

[4] and [5] Software became a huge effort for Apollo, with over 350,000 words of programmes, and 175 programmers, supported by 200 hardware engineers (in ‘Computers in Spaceflight: the NASA experience’, author uncredited).

[6] See ‘Computers in Spaceflight: the NASA experience’ for a detailed explanation of the technical dimensions of this, that i won’t attempt to replicate.

[7] Chaikin (1994) provides a great chapter on the simulation of the moon landings, and a perspective on Armstrong’s desire to take control.

[8] In the event, defecation was handled with plastic bags with adhesive strips. For urination, a condom type attachment to a pipe was needed. In an aside that speaks somewhat to the mentality of astronauts, these caused some problems with leakage in the early days, the condoms being provided in ‘small’, ‘medium’, and ‘large’. The issue resolved itself when the next batch were badged ‘Large’, ‘extra large’, and ‘extra extra large’.

Chaikin, Andrew (1994): A man on the moon: the voyages of the Apollo Astronauts. Penguin, London.

Kranz, Gene (2000): ‘Failure is not an option: Mission Control from Mercury to Apollo 13 and beyond’. Simon and Schuster, New York.

Author, Artist, Researcher, and Founder of Sea Salt Learning. My work explores the context of the Social Age and the intersection of formal and social systems.
View all posts by julianstodd →
This entry was posted in Apollo and tagged Apollo, Apollo at 50, Astronaut, Failure, Neil Armstrong, Simulation, Technology, Testing. Bookmark the permalink.

4 Responses to Leadership Reflections from Apollo at 50: Chapter 5 – Simulation & Testing