This is the sixth in a series of articles exploring my new Map of the Social Age for 2019. Today, i’m writing about ‘trust’. nearly 30 months ago, i kicked off the global ‘Landscape of Trust’ research project, to explore ‘what trust means’ in three contexts: the trust that is held between two individuals, trust as exists within communities and teams, and the trust that people hold in Organisations themselves. At the start, i thought that i had a fairly good idea of how this would play out, that i would build a more rigorous understanding of what trust is, and how trust flows, but in fact, i feel i’ve fractured the bedrock that i was standing upon. Trust, it turns out, may be the key for understanding a whole host of other things in more granular detail: storytelling, change, innovation, motivation and momentum, and leadership itself. And through this journey, i have come back time and again to rewrite things that i previously held to be true.

Certainly one of the early realisations was that ‘trust’ is not one thing, nor the only thing, that moderates and binds social systems: pride, respect, love, reputation, need, are just a few of the other forces that people describe that hold them together, or drive them apart. But ‘trust’ is certainly a powerful force within that basket. Whatever you take it to mean! Some people describe trust as absolute, and projected: they decide that they trust you. Others describe an iterative and reciprocal approach, whereby they ‘think’ they have the potential to hold trust with you, and then commence a series of steps whereby you both trade small tokens of trust, and step up together.

Some people describe ‘trust’ as ‘love’: they say that they hang out, and then realise that trust has blossomed between them. Others describe it more in terms of belief: they hold you to a standard, and believe that you will hold it safely. Some people say trust takes a lifetime to form, and others find it in ten seconds as they are dragged from a burning building. Some say that trust can only be held in other people, and never in an Organisation, but most people ‘trust’ their seatbelt to save their life. 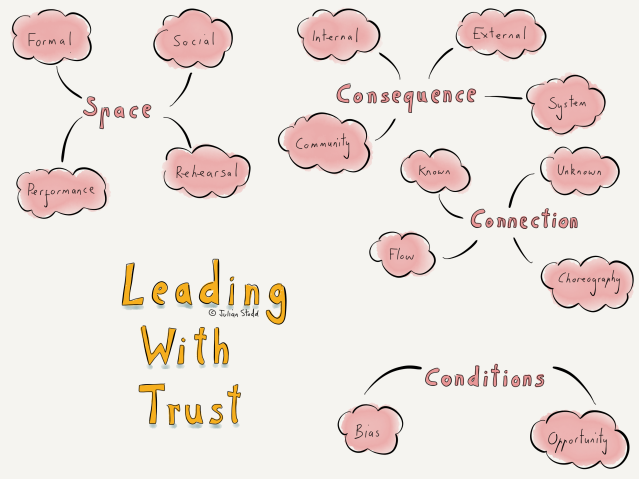 I guess the picture that i would paint is a divergent one: trust is clearly subjective, and means different things to different people. if forced to settle on a description, i would describe it like this: trust is a complex basket of forces, often internally conflicted, and in any given moment we may look down into that basket and take a snapshot. From that picture, we determine our view of ‘trust’, for now. But almost everyone describes that trust is both contextual, and fluid: i may trust you right now, in this context, but not trust you at all in another.

So why has it made an appearance on the map of the Social Age for the first time this year? I guess my reasons are twofold: firstly, it’s been such a feature of my own work recently, with two books published so far, that i cannot escape it’s influence, but secondly, i’ve included it because it acts as a foundation for other key elements that we are exploring in this work. ‘Belief’ relates to ‘trust’, as does ‘community’. Social Leadership is almost by definition an act of ‘leading with trust’. And in the context of the fractured Social Contract between Organisations, and the individuals that inhabit them, trust may be one of the few forces of engagement left for us to earn.

There is a broader context too: in my work around the Socially Dynamic Organisation, i focus on the idea that we need to become more ‘interconnected’, not simply connected and collaborating within our known tribes, but interconnected into communities of difference and dissent, collaborating in complex ways. And that word ‘tribes’ is of vital importance.

I said earlier that the work on the Landscape of Trust has impacted on the bedrock of my own understanding of Organisations, and one of the most visible ways is how descriptions of tribal structures now permeate my work. In 2014, when i wrote the Social Leadership Handbook, i described how individuals come together in communities, which have shared value and shared purpose, and then those communities come together within Organisations. And today, i no longer say that.

My new language is as yet imperfect, but reflects my own understanding, so that is the best that i can do for now: ‘tribes’ are the most elementary unit of society, ‘trust bonded’ structures. And ‘Communities’ are meta-tribal, made up of constituent parts of multiple partial, or intact, tribes. But communities themselves may not be trust bonded, nor do they necessarily have shared value and purpose. Building out the taxonomy in this way is something that i have found useful to reconcile this stream of work, with a parallel stream around ‘types of power’. Tribes probably relate to individual power, charismatic power, and communities to more networked forms, which spread further.

The work on Power has influenced that second challenge as well: if communities are not bonded by shared values and purpose, through consensus, then what are they bonded by? Opposition: many, if not most, communities find unity and coherence in their opposition to others. Indeed, i now use the most basic definition of community to be ‘a mechanism of exclusion’, because a community almost cannot be intact unless it excludes someone.

So one reading would be this: that we form close and persistent ‘trust bonded’ tribes, and belong, through these, to multiple communities (in our recent research in the NHS, people estimate they belong to an average of ten different communities). Our trust resides in the tribe. This is significant because where trust resides is where we will expose ourselves to risk. Which is why people will innovate, and share failure, locally, but not globally. Organisations may experience a great deal of innovation and experimentation, but almost all of it outside of formal structures, and invisible at scale. Hidden away in many parallel tribes. Interconnectivity is the way that we surface, and join up, this distributed individual agency, at scale.

Money will buy you functional engagement, but to earn the invested engagement, we must access this intra tribal space, and that is a space that we can only enter with permission. Trust must be earned. But once we have it, if we nurture it, we can transform. And easy phrase, a hard challenge. I suspect that mastering ‘trust’ is one of the hardest things for Organisations to do, because it is a currency that is traded in a different exchange.

One of the most compelling outputs of the Landscape of Trust work concerned the things that people would do if they felt that the Organisation they work for trusted them (54% said that they had ‘low’, or ‘no’ trust in their employer!). If trusted, they said that they would ‘Experiment’, they would help others to succeed, they would share. Key aspects of agility.

I’ve included ‘Trust’ on it’s own island on the Social Age Map for 2019, not least because it often feels like a distant destination to reach, especially for Organisations stressed and exhausted by constant change. But it is, at best, a resource that is free, if we are willing to engineer our systems to earn it.

What you need to do:

If you are interested in the Landscape of Trust, my books ‘The Trust Sketchbook’, and ‘The Trust Guidebook’ can provide a more detailed space to explore. In July, i will also be launching a new Certification on ‘Leading with Trust’.

Author, Artist, Researcher, and Founder of Sea Salt Learning. My work explores the context of the Social Age and the intersection of formal and social systems.
View all posts by julianstodd →
This entry was posted in Social Age, Trust and tagged Cartography, Map, Social Age, Socially Dynamic Organisation, Trust. Bookmark the permalink.