What is a gang? A social structure, certainly, with defined membership, and rituals surrounding that. A structure with hierarchy, either formally defined, or discovered through experience, either fixed, or fluid. Territorial: a gang is associated with a subset of geography, or space. A gang may be externally moderated (you can be put into a work gang), or internally moderated (you can be in my gang). It may be associated with criminal intent, general mischief, or may be neutral in tone, or even positive in intent (and the determination of that may be contextual). 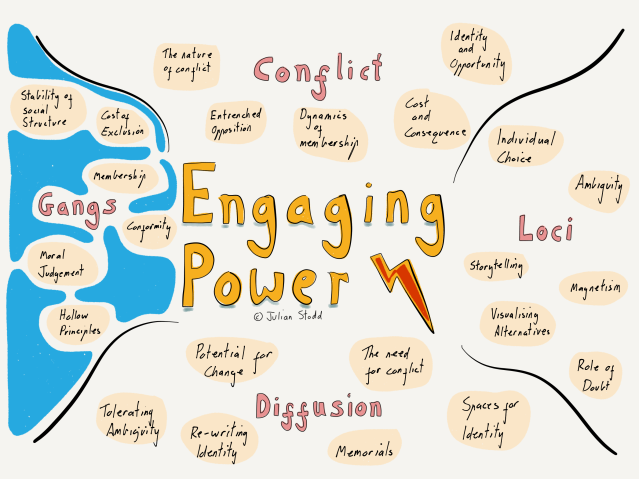 In popular usage, we tend to swing to the negative: you have a ‘gang mentality’, implies you act as one, probably to the detriment of others. We ‘gang up’ on someone, if we act in unity against them.

One narrative of gangs puts them at the root of much social disorder, although there may be a certain mythology to this, as it may imbue them with a sense of organisation, capability, and planning that lies beyond most other organisations.

The easy depiction of a gang is through a photo of a young man, covered in tattoos, preferably in prison, or riding a motorbike, wearing leathers, or perhaps in a hoodie, in some ill defined ghetto, at night, with shuttered store fronts behind him. Someone is probably drinking. If girls are in that stereotypical photo, they are likely either draped as decoration, or snarling to the camera.

Whilst gangs are social structures, they abide by certain rules, albeit often unwritten ones: to be in one gang will preclude membership of another. You can be in the Bloods, or the Crips, but i suspect not both: membership of one actively excludes you from the other. Reinforcing these rules are modes of enforcement: the consequence of gang structures is that you are subject to repercussions.

Iconography, and artefacts, are central to identification: the aforementioned tattoos, and gang ‘colours’, which may be literal, or figurative. Progression through the ranks may include badging, as well as a strong sense of narrative, be that tattooed tears, ever more complex imagery, or rank based permission to wear certain items. Indeed, in some gangs, the notion of ownership itself is dependent upon rank.

Which all adds up to complexity: gangs are not simple structures, appearing from nowhere, but are rather complex, persistent structures of power, and modes of social organisation, often deeply rooted to place, and pervading other, more formal, systems.

And they are incredibly hard to crush.

This series of posts is prompted by conversations with members of both police, and military, about opposition: be that to gangs, or insurgent groups, and the ways that overwhelming force is sometimes our least effective option. The relevance of this reflection runs beyond law enforcement however, because the social forces of membership, conformity, rank, moral judgement, and exclusion, which govern gangs, are precisely the same social forces that govern every other social structure. Including the very police forces and military entities that we send against them.

Let’s consider some specifics: gangs are stable structures. Young people grow up in a known ecosystem, so at some age, graduation into a gang seems like an obvious, logical, even unavoidable, choice. The decision of a young boy living in a deprived urban area, with structural violence and generational gang structures is not the same as my decision to travel to that area to join the gang. For me, it’s exceptional, for him, possibly normal. For me, it would mean abandoning existing value structures, membership structures, social norms, but for him it may be the opposite. Becoming a member reinforces the dominant local social values, confers clear (if lowly) rank, and is perfectly normal.

More: it may be of greater risk not to join the gang, especially if, in your day to day, you encounter other gangs. Better to face off in numbers, than alone.

And forces of structural inequality put you into conflict with the law itself: that young black man is far more likely to be stopped and searched than i am, due to location, colour of his skin, and circumstance.

There is both a cost of membership, and a cost of exclusion, but the balance of payments may differ with your personal context. What this means, though, is that your decision to stay out, and my decision to join, are both logical, and both, to some extent, predictable. We do not play on a level field.

For all the trappings of identity and preconception, gangs are ultimately a representation of power, a structure of consequence, and that is why gang members will describe the police as the biggest gang of all. Because when you are within a structure of power, anything that opposes you is another gang. And persecution draws us closer. That’s an interesting thing: we can impose the tag of ‘gang’ on another. It’s not just a willing badge of pride.

The very moral judgement that we impose on criminal gangs forms a strong force of attraction in certain contexts. Membership gives an imbued power, a role based authority, and both of these things are highly significant when it comes to diminishing, or countering, gang culture. Imbued power is not power that i have earned directly, or expend directly, but rather power that comes from membership. And role based authority is that which comes with the uniform.

In a modern, urban, structurally impoverished, community, many of our wider political and social conversations ring hollow. People join gangs because there is no other show in town. And to entice them to leave means creating a new show. The threat of the law reinforces the bonds that hold the gang together, and the judgement of society may be the final recognition of authority that is craved.

You could crush gang culture through overwhelming force, but as we have learnt time and again through history, the wise will only go to war whilst thinking of how they will negotiate the peace.

Overwhelming force would come at the cost of social fracture: persecution, marshal law, disruption and destruction of community. We are already almost there: in some communities, the legacy of gang culture, and the response of law enforcement and moral judgement systems, is generations growing up with incarceration of their fathers as the norm. Our very act of justice may create the social conditions that perpetuate the gangs, and (as i wrote yesterday) that may suit certain political views. We can hold ourselves in opposition to these gangs and feel better for it.

But peace, if it’s achievable, will come by changing the loci of engagement.

How can we create a new space, to bleed the power from the edges. That is where victory is found: not in crushing the system, but in diffusing it. And that is what i will explore tomorrow.

Author, Artist, Researcher, and Founder of Sea Salt Learning. My work explores the context of the Social Age and the intersection of formal and social systems.
View all posts by julianstodd →
This entry was posted in Community and tagged Consequence, Crime, Culture, Gangs, Police, Policing, Power, Prison, Society, Tattoos. Bookmark the permalink.