‘I’ve led a hard life’, said Mustafa, not seeking sympathy, but more as a statement of fact. And i could believe it. In his mid fifties, we were talking in the earth and wood riad that he had built, himself, over the last ten years, and where i was spending the night. 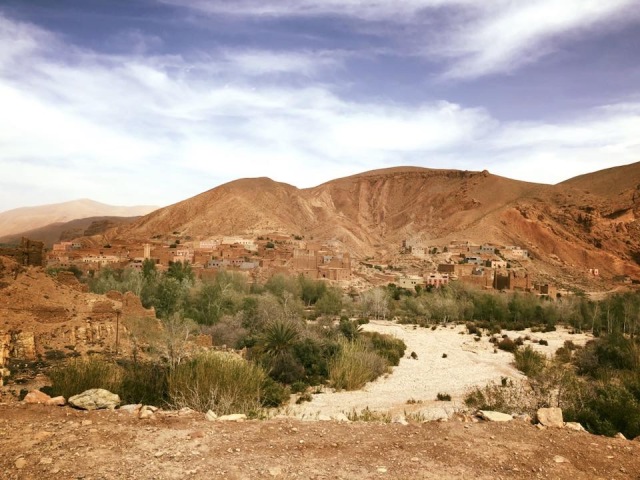 I came to meet Mustafa, near the Atlas mountains, at the start of my journey through Morocco, and i met him through Expedia. Or perhaps, more accurately, i should say that i met him through TripAdvisor, through his reputation.

Mustafa had worked to get to college, then worked abroad, in the tourist industry: he had acted as a tour guide, a rep for larger organisations, and in various hotels and parts of the hospitality sector. Ten years ago, he became more focussed, and worked abroad, away from his family, to earn money in long stints, before coming home and using that money, and his own skills, to build the riad. As we settled down to dinner, he had been up and running for just a few months, but already was building the reputation and online presence that took me to his front door.

The impression i had from him was not one of hard work an grind, but rather of passion: we talked at length about sustainability, about how he would not heat the riad with wood fires, which would drive further deforestation (a big issue in Morocco), but rather with small, individual, gas fires. He talked about his debates and arguments with local politicians and leaders, about the direction of tourism in Morocco, his frustration at the lack of vision, and how nearby Spain, with similar climate, vastly outcompetes for the tourist dollar.

His own riad is a manifestation of that passion, but i suspect would not have been possible even ten years ago. He has put in the miles, and now is building an independent reputation, enabled, and empowered, by the global, democratised, technology, of the large travel sites. And he is not alone.

The Social Age sees a general shift away from commoditised, identikit, replicable, experiences, towards personable, passionate, and unique ones. In fact, out of all my fifteen nights in Morocco, only one night was spent in a chain hotel, and that was a local chain with only two hotels. The rest were all local, all individual, and all accessible solely through reputation, reviews, and charisma.

This connectivity is at the heart of the Social Age: it allows those things that were historically local, to build out globally. Brands and ideas that previously would have struggled to go beyond local reputation and word of mouth now travel globally, and at scale. The last project that i funded on Kickstarter did not just beat it’s goal, it bust it a hundredfold, because it ‘caught fire’. The democratising, connective technology, enabled it to build a global community.

For someone like Mustafa, i am excited: his conversation about sustainability is held from a global perspective, and it’s matched by his desire or legacy. He talks about how his children will have a sustainable business to own, and not one that can scale. He was very clear about this: he could have built bigger, he could have pushed further, but at the current size, he can take about sixteen guests on any given night, and he can host them as guests, not as ‘units’. He can provide a unique experience, and ensure it is experienced at the quality that will enable him to build that reputation ever further.

I enjoyed the experience of staying with, and talking to, Mustafa greatly, not simply in itself, but as part of the wider conversation about the rise of the connective transnationals: the organisations that are effectively replacing government as the infrastructure providers, and replacing traditional organisations as ‘career’ spaces. They enable people like Mustafa to invest their energy, their cognitive surplus, their potential, into something that they can, themselves, retain a control over, and benefit from. And that is exciting.

Not without risk: the dichotomy between those who are enabled and empowered, and those who are not, is growing ever wider. Another aspect of my time in Morocco that is very much on my mind, and which will explore tomorrow.

Author, Artist, Researcher, and Founder of Sea Salt Learning. My work explores the context of the Social Age and the intersection of formal and social systems.
View all posts by julianstodd →
This entry was posted in Adventure, Writing and tagged Morocco, Reputation, Social Age, Sustainability, Tourism, travel, Travel Writing. Bookmark the permalink.