Today, i’m launching a crowdfunding campaign for a prototype of The Trust Sketchbook. It’s a limited edition proof of concept, for a co-drawn, co-created, and co-owned exploration of ‘trust‘, exploring what trust is, how it’s held between individuals and within teams, and across organisations themselves. The Trust Sketchbook is a project that i’m running in parallel with The Landscape of Trust research project, a scientific study into the same subject. So: one art project, and one science, which i hope will compliment each other.

Inherent in the understanding of agility, of #WorkingOutLoud, or even of the Socially Dynamic Organisation, is the notion of incompleteness: a sense of iteration and evolution in design. Not a lack of focus, but rather a contextualisation in the moment. My inspiration for the Sketchbook comes from my work around Social Learning: in a Scaffolded approach to learning, we don’t just write a story and tell it to people, rather we create spaces for people to explore. That’s what i’m trying to do here: create a space to explore, through reflection, writing, and drawing.

But it’s a prototype, and i am comfortable with a reasonable expectation of failure.

I crowdfunded the book that is currently in production, on ‘Social Leadership: my 1st 100 days‘, but that was different. It’s fully formed, complete. Indeed, it took me the bulk of the time invested to simply draw the one hundred and three images. The Trust Sketchbook will be different: the first of a series of iterations, more of a ‘zine’ than a book (you may remember i’ve done two previous Zine experiments, one around Equality, and one as a semi academic Journal). 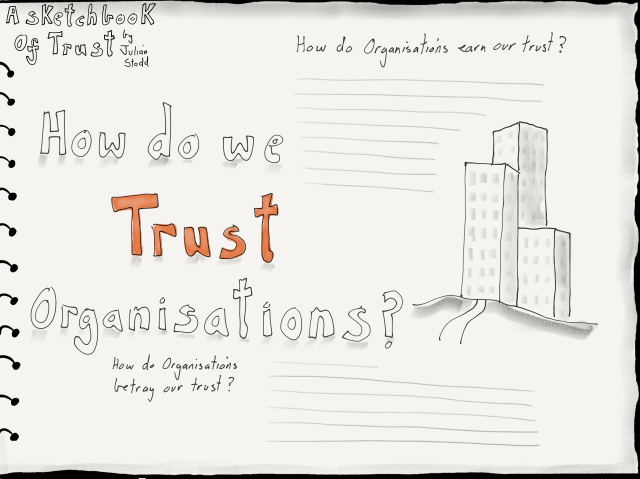 I may fail to get it funded, or it may simply fail in the execution: but if you spend all your time worried about failure, then you’ll simply fail to take the first step.

In the Landscape of Trust research, i’m investing a great deal of time in data gathering and analysis. I already have well over a hundred submissions, and am starting preliminary critical discourse analysis on the texts this week. The research methodology for this will involve both qualitative and quantitative data collection. It’s a pretty decent study, if i do say so myself, and the initial results are already fascinating (i will be #WorkingOutLoud and publishing the analysis as i go, probably give me a few more weeks to get the first piece ready to go). But it’s always fun to explore other languages of learning.

I have always resented the distinction between art and science, not for anything inherent in it’s definition, but rather the way that our education systems tend to encourage people to think that they are ‘creative‘, or not. I have always happily blundered between the two, and i honestly believe that most people can express themselves in both these languages, if given a chance.

So: the Trust Sketchbook is a lighthearted, semi frivolous, but semi serious attempt, to explore that space: it’s co-created, because you fill it in yourself. It’s co-drawn, because i’m only sketching in black ink and leaving wide open spaces, and it’s co-owned, because the narrative structure is there, but the words need to be written within it.

If it succeeds, i will continue to iterate it, and see if it can form an eventual parallel publication to the full Trust book (something i will work on in 2018, when the full Landscape study is complete). If it fails, i will use it as a chance to #WorkOutLoud and reflect upon my own learning. Either way, i think it will be a fun ride.

You can check out the Kickstarter campaign for the Trust Sketchbook here.

You can take part in the Landscape of Trust research project here.

2 Responses to Crowdfunding ‘The Trust Sketchbook’: Art and Science