A Socially Dynamic Organisation will be fundamentally adapted: not simply a minor reinvention of the current state, but rather a fundamental evolution in organisational design and execution. Not unrelated to the current state, but certainly evolved from it. I shared this sketch a few weeks ago, an initial attempt to characterise the ‘purpose centred’ organisation: primarily it is intended to show how this adapted organisation will be organised not purely by principles of function, but rather by aspects of interaction. It will be Socially Dynamic not simply through process and training, but rather through behaviour and mindset. 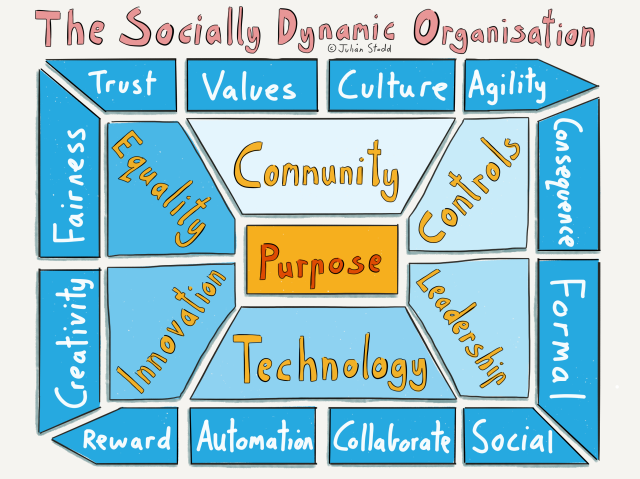 All of my work is sketched, reflecting the evolving understanding, but this, more than most, is an imperfect view. My only defence is that the imperfection is intentional: the Socially Dynamic Organisation will be discovered, not imposed, will be adaptive, not fixed, so this view may prove to be as useful a starting point for reflection as any.

Technology will form the backbone of the collaborative infrastructure, but the real prize is the engaged community: one is not caused by the other, but rather may facilitate. Community and technology will likely always remain a dynamic relationship, with conversations flowing across and around specific technologies, and communities being multilayered and impermanent. Leadership is important in both formal and social spaces, and one of the areas that I’m most concrete in my thinking is in the way that organisations need to adapt and develop both. Strong pillars of formal leadership, formal power, and direct control, to achieve effective scale, but also strong pillars of Social Leadership, reputation-based, devolved and democratised, co-creative and distributed.

The ability of the organisation to maintain dynamic tension between these two types of power will be significant for its success. In parallel to this, the mindset of the organisation to control will be a dominating factor: the way that it is able to make consequence explicit, and to vary consequence transparently are significant in earning engagement.

Organisations often seek innovation, and yet innovation is an output from the system, not a process within it, or something to be demanded. Innovation can be a weak voice that we must earn the right to hear.

My mind has been very much on the subject of trust, with the research project gathering momentum in the background, but similarly, trust must be earned across the system. It’s not simply a matter of the interaction between the formal system and the social, or between leaders and teams, because trust sits primarily within the social system, so it’s a matter of interaction and a reputation earned over time. I suspect it will prove to be a differentiating feature of the Socially Dynamic Organisation that it has widely spread strong trust ties running against the grain of the formal hierarchy. It will be connected in many different ways both up and down the chain, and across it. Trust relationships build over time and are held over time out of sight of the formal system.

As we move into the summer and trying to block out four weeks to complete writing and illustration of the book on ‘Change, and the Socially Dynamic Organisation’. I suspect that this illustration, or the next iteration of it, will make its way into one of the final chapters, where i start to look at application and organisational design. That’s one of the benefits of sketching your work: you can continue to iterate it and develop it further as your own exploration and experience develops. That must surely almost be a valid definition of agility.