Iceland: The Battle Of Fire And Ice

Systems seek stability, a levelling of energy, an erosive calm. Heat sinks towards the temperate, erosion claims the highest peak. The fire and fury of the eruption is ultimately frozen as ragged rubble, fractured and tumbled, lying calmly in the dying sun. 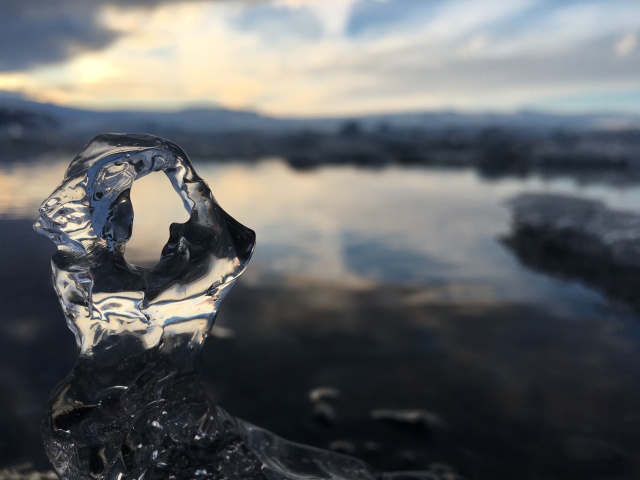 I realise that the lava fields are new to me: a type of landscape that i have never before experienced, at least not in this raw form, this un-eroded state. I am used to clouds: staring from airplane windows at rolling white vapour fields, gently undulating from wingtip to horizon. There is a similarity of form: the surface of the fields around me mirror that undulation, but instead of ephemeral mist, this landscape is condensed from stone, spewed forth in fire and cooled to jumbled calm.

The landscape lies like a grey duvet, but each rolling mound is split: evidence of escaping gases and temperature gradients. What, at first glance, at the macro level, looks like stillness, is, in the detail, almost uncrossable: fissured, distorted, a parody of motion. I become fascinated by the pseudo craters: as roiling lava crossed waterlogged fields, the trapped moisture becomes superheated, bursting through as superheated gas, creating mini craters, some with the look of gigantic blunderbusses, cannons split open by the force of the ejection.

More used, as i am, to stone a silent sentinel, this vision of stone as ice, of stone captured in the instance of creation, is unsettling, strange and alien. Where i come from, volcanoes are the stuff of books: creation is a distant memory, and the predominant force is erosion. Here, the landscape wears it’s heritage closely to hand. The signs of creation are writ for all to see.

As i become familiar with the crusted lava, it’s replaced by moss: a verdant carpet of green that softens the landscape, whilst retaining that sense of frozen energy. It’s not just a patch of moss: it’s an entire landscape. Whether this is a feature of simple age, or the gradual taming of the stone, a transitional phase towards soil and pasture, i am unsure. Clearly something trips parts of the landscape to grow: so as memories of magma and vented steam recede, the land becomes slowly green once more, albeit on a raggedly disrupted base.

At the grandest scale, the battle here is between fire and ice, between stone and water.

Whilst the foundations are laid in rock and ash, the sculpting is done by water and ice.

Glacial cut valleys bisect mountains and flow around cinder cones: broad sweeps of paint brush aside almost everything in their path. Glaciers scour and grind, they exert tremendous force, literally carving and distorting the crust as they do so. Once the grand glacial force is spent, it’s down to the trickles to become streams, streams into rivers, and rivers into torrents of water that wend and buck across the stone: whilst their motion is light and rapid, it’s time that turns these rivers into art. The never ending stream carves across valley floors, down canyon sides, gouges out ravines impossibly tight and steep, and delivers the final form to the everyday landscape.

This volcanic land is locked in a constant cycle: the fires of creation damped down by the frost and erosion of the ice. And through it all, the verdant force of life that colonises, softens and circles back from desolation to pasture. Whilst all landscapes are similarly shaped, it’s here, in Iceland, that the bones of tectonics and the raw force of entropy seem closest to the surface, somehow untamed and more immediate. The landscape exists at the meeting of two tectonic plates: a liminal zone, an edgeland, a zone of creation and loss. To carve a living here is to exist in the middle space: neither new nor old, neither permanent, nor lost, Neither the old world, nor fully the new.

5 Responses to Iceland: The Battle Of Fire And Ice