Change in the Social Age: Which State Are You In?

Posted on January 5, 2017 by julianstodd

I’ve worked across 14 separate parts of the book today, but just sharing one section which is written from scratch. This piece sits after the detailed description of the three manifestations of change. We have talked in depth about the Resistant organisation, the one that resists and denies change, the Constrained organisation, which is well-intentioned but ultimately ineffective, and the Dynamic organisation, which is agile and adapted. The chapter I’m sharing today ask the simple question, which state are you in? 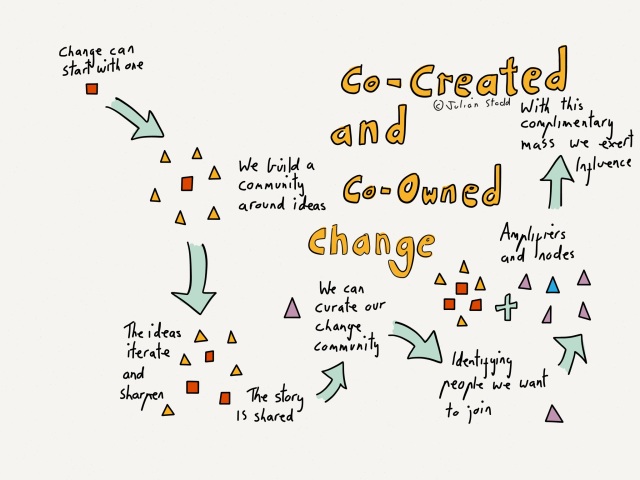 I am continuing to #WorkOutLoud as i try to complete the full 3rd draft manuscript by the end of next week.

Title: Which state are you in?

We’ve looked at the three manifestations of organisational change, so what state is your organisation in?

Is the diagnosis simple? Can you say whether the organisation is simply Resistant? Or is it definitely Constrained? Perhaps it already feels highly Dynamic? The answer is different not only for every organisation, but often for different people that you ask within an organisation. It is a subjective question, although I hope the indicators of what we see, hear, and feel will give a clue.

If asked to generalise, I would say this:

The youngest organisations tend to start off inherently Dynamic, simply because they have not yet had time to accrete the mechanisms of control and lethargy that would make them Resistant. It’s like when you move into your first house, you walk in carrying just a couple of boxes, but years later, when it’s time to move out, you need a van.

Many of the organisations in the middle space are middle-aged: the troubled technical teenagers, those organisations that were highly disruptive in their youth, and are often deeply influential and powerful today, and yet somehow find they are losing something of their ability to be creative, to be innovative. As they become part of the mainstream, they may experience more elements of Constraint.

In the second part of this book when we start to look at the Dynamic Change Framework itself, we will see that it is not specifically a change process, not a specific set of tools or a methodology that you can apply in any organisation, but rather it is a way of unlocking the energy within, of creating spaces and permissions, of creating the conditions for success.

It’s important at this time to consider where your organisation lies, because it is against this baseline that we will measure change, and measure it we must.

Constrained organisations are very busy, but would find it hard to measure much change, because they are not truly changing. Undoubtedly there will be some progress, but because the energy is not aligned, it’s change within the system, not a change of the system itself.

A Dynamic organisation should be able to measure six week change: every six weeks there should be a sense that the view has changed. If six weeks seems like a short time, we can say 12, but if we say 12, before we know it, it has become 24, or 48 weeks. Before we know it the future is upon us and we have not changed. Ultimately changes about both change in the physical system, the structures, processes, systems, and controls, but also the everyday behaviours, the mindset, the conversations, the sense of energy and urgency, and if we cannot see a change in these within six weeks, then we are simply observing the fact that we need to change. We are in fact Constrained.

What you need to know

1. It’s important to think about the space that your organisation inhabits, and to see where you agree or disagree with the opinion of others.
2. Most organisations tend to fall to Constraint: it’s the entropy state
3. We should be able to measure change in six weeks, because if we can’t measure it, we are not changing.

Author, Artist, Researcher, and Founder of Sea Salt Learning. My work explores the context of the Social Age and the intersection of formal and social systems.
View all posts by julianstodd →
This entry was posted in Change and tagged Books, Change, Change Curve, Resistant, Socially Dynamic Organisation, WorkingOutLoud, Writing. Bookmark the permalink.

6 Responses to Change in the Social Age: Which State Are You In?