I do like a train: there’s something beautiful about utility and power, the simplistic design linked to function, the constrained and stripped back potential of the system. Cars show off, they are all about streamlined curves, lacquered wood, increasingly integrated and sophisticated displays, style and comfort. Locomotives eschew all of this in favour of function, raw utility, and effortless power.

There are beautiful trains: historic steam trains, maybe even some contemporary high-speed trains, but these are the exception, the ballerinas, not the everyday plodders of goods yards and commuter routes. Across the system, from dawn till dusk, and deep into the night, trains serve us with a religious determination and a dogmatic adherence to that which they do best: to push, shunt and notch, to pull, haul and drag.

Like any good theatre, there is a front and back stage: as I travel around Switzerland, jumping from train to train, always on time and immaculately presented, I sit in the audience watching the performance. I see the polished face of the system and experience it as a consumer. But once I’m on the train, sat comfortably with my coffee, staring out the window, I get to see behind-the-scenes, the rehearsals and shunting of scenery as the grand moves are made to enable such exemplary performance.

I lived in a cheap flat once that overlooked the service yard where the trains in my town came to sleep. Every night at three or 4 o’clock in the morning they would shuttle and shuffle, clanking and creaking, settling down and cooling off after a busy day of work. The whole scene was lit by intermittent sodium lamps, always semi-dark, sometimes wet and fighting the beating rain, but always and reliably comforting, the sound of giants sleeping. 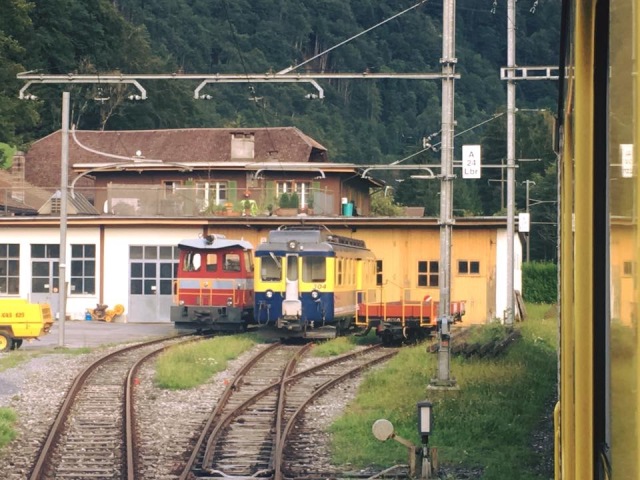 The largest trains I see are those dedicated to the network itself: like some kind of self-healing system, these are the white blood vessels and antibodies deployed where rust and friction, landslide or flood, breach the defences and damage the rails. These are the behemoths who swarm in the aftermath of disaster, cutting rails whilst sparks fly, lifting up damaged sections, scooping out the ballast and making good the repair. These are the trains that can repair the track that they run upon: scooping out, laying down, heaving and twisting as they make their way. I imagine them traversing the country laying their own track in front of them as they go, the explorers, the entrepreneurs, the dogged defenders of the system.

Next come the workers: these mid-sized red locomotives are everywhere, they push and shunt carriages onto express trains, dragging collections of cars in twos and threes, waiting in sidings, dashing across the main routes, arranging and rearranging jigsaw pieces in a perpetual motion of creativity and according, I can only assume, to some master plan. There is always attention between the micro and macro level: at the macro, there is a view of the system, a plan for transport, and ability to timetable for peak hours and quiet Sunday afternoons in some kind of coherent and efficient manner. At the micro level though, the level in which I live, the level at which I travel, I see only steel and rust, the grease and diesel. There is only the clanking and crashing of individual carriages moved not with delicacy but with determination.

These locomotives are utilitarian design, at the heart powerplant both boxy and determined, with everything else formed around that. The cabin at the back allows you to stand and look around, to look in front and behind, but it is built easy access, to allow muddy boots to stomp, not polished brogues to sit. Front and back are buffers: solid, serious, designed not to avoid collisions but to facilitate them. These are the points of contact that impart momentum and motion into the system. The angles are squared, designed for utility not aerodynamics, and just visible beneath the mass of the superstructure are the silvered wheels.

Everywhere there are snowploughs, but some small locomotives are dedicated to this cause. They sit idling at the end of sidings, tucked away in the corners of goods yards, waiting for the time to come. These are engines of need not beauty: called upon when all else fails, called upon to clear the way to clear a path, to forge a route through snowfields, to carry the trains, to carry the post.

The railways in Switzerland carry one trick up their sleeve: trains rely on friction, the friction between wheel and rail, but that will carry you only so far. Much of the heavy engineering of railways is to keep the track level, to keep the changes in height within tolerable limits because if the angle becomes too steep the friction will fail and engines will slip and slide. This is the normal limit of the system and indeed great effort is made to scrape and clean the track, to keep it clear of leaves and snow that can impair even this limited performance. But there is another way.

In the mountains there are times when friction is not enough and the cog railways prevail: with these systems as well as the normal rails that the wheels run upon there is a third rail, heavily pitted, deeply indented, like a gear wheel laid out flat with iron teeth facing sky. On these cog railways the trains claw their way up the incline: no longer the victim of failing friction, but rather products of torque and power, brute force as elegance. These trains go where others would fail, up mountain passes, indeed, in places, inside mountains themselves. These trains are not trains of beauty but rather trains of pure function itself.

To be a passenger upon the Swiss Railways is not simply the transport oneself from A to B. The journey is not incidental to the day, it is the high point of the day. This sense of connection to the landscape is integral to train travel: on planes we are divorced from reality, in cars our eyes are anchored to the road, but on trains we are spectators, audience members, in front of whom the panorama of landscape is scrolled and played out. We are presented with an ever-changing vista, a vista of both natural and man-made performance.

In parts of the country farmland stretches out, dotted with barns and farmhouses, infested with the mechanics of production: tractors and combine harvesters, ploughs and diggers. As well as arable crops, much agricultural production here is vines for wine and orchards, stretching across the valley floor and significantly at the sides. There is a sense of old landscapes here: terraces which must have taken thousands of man hours to build, indeed I read somewhere of 13th century irrigation channels for vines, providing water nearly 1000 years. That’s the thing about infrastructure, you need a lot of it in a country like this, but in a country like this it can last for long time. Indeed some of the railways I travel upon a second or third generation, the wooden sleepers replaced by concrete, the steam trains replaced by electric or diesel, still a railway, but not the same railway it was.

I watch an ever-changing landscape: industry clusters around transport networks, small warehouses and sheds through to giant distribution depots. The bones, muscles, and sinew of a country of its transport network, the blood being the goods that flow through it.

Stations are transient spaces, nobody lives here, everything is in motion. They built to service short-term needs: food and shelter and a progressive disclosure of information for how you can leave. The main line stations are large, intersections of many routes, places to shuffle and change, all staircases and corridors, coffee shops and notice boards. But once you leave these transport hubs you are into the smaller stations, often simple shelters and vernacular architecture, sundrenched at this time of year but doubtless welcome shelters at others.

The railway system is a system in constant change: as well as the bustling hubs and busy goods yards there are the derelict edges of the system, the places where nature battles to reclaim. These are occasional disused sidings where the odd ancient guards van stands, never to run again, slowly rusting and decaying in the changing seasons. These are the lines that run out to disused factories and abandoned warehouses, often standing in the shadows of the newer replacements, older brick and wooden buildings replaced by plastic and steel, and often container trucks and road networks outpacing the rail, at least in urban areas.

A couple of times I see an unusual sight: flatbed trucks loaded up with lorries, long lines of these where the lorries abandon the roads to line up on the rail network and be shuffled along in convoys. I wonder about the economic of this, but I guess there must be a clear case: to take a truck at one end of Europe and freight it by rail to another where a different driver will pick it up and drive it off.

There is a sense of constant motion in the railway network, a network which one only ever visits, but still there is a type of beauty, a beauty in utility and functional design.

11 Responses to Switzerland: Beauty Through Utility