Switzerland: Trains of Rust and Power

In the goods yard at Tirano sits a steam train: it’s old, deeply rusted with holes poking through the ironwork, heated by the beating sun, each panel etched by lines of decay, flaked by time, remnant of a bygone age. It’s purpose is clear: to work, to haul, to pull and shunt, to tug and heave. The mountains around us testament to the challenges it would have faced, but now, in it’s dormant state, in retirement, the shapes i see, the pistons and wheels, the firebox and boiler, these are symbols of power, no longer power itself. This shape is the shape of lines that one once defined strength, but now sketch memories of steam and oil against the scorched stones of the platform edge. These are lines of memory, of spent potential, but no lines of sorrow: this is a quiet decline, a sheltered fall, an engine honoured, allowed to rust in sight of the lines it once served. A memory of a grateful society. 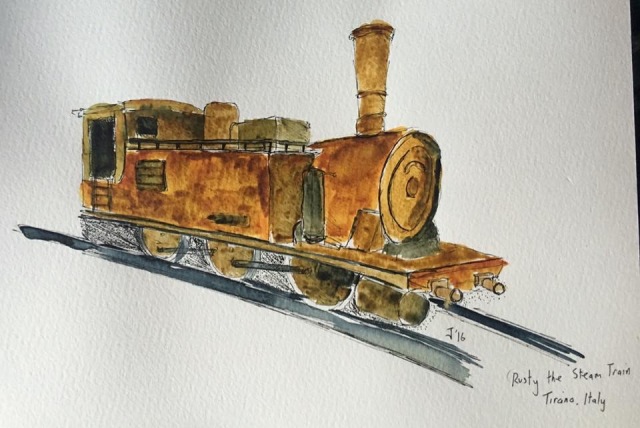 It’s more graceful than the sculpture i see later in Lucerne, a steam train deconstructed, shot blasted and rearranged, tangled shapes artfully connected and bolted together to decorate the main hall, but somehow bereft of meaning: wheels and beams formed into the shape of an arch, but confused and bereft of meaning. The symbols of power and steam here are bastardised into art, but art without power: art that seeks to draw meaning from history, but abstracts the artefacts away from any true meaning into simple symbols of power, intended to invoke the thing, but rather invoking pity and loss. In Lucerne, history is exploited and power diffused, in Tirano, it’s memorialised and respected.

In Tirano, I stand by the oxidised metal, in the sunshine, looking around at the mountains: this is the start of the Bernina Express, which runs from Tirano through to Chur, in Switzerland, only ninety miles as the crow flies, but the crow does not make this trip like the train does.

Fifty five tunnels, a hundred and ninety six bridges and viaducts, and gradients that reach 1:7. To make this epic journey, through the Bernina Pass, requires the train to rapidly gain great height, and to lose it fast on the other side, a feat achieved through the use of several ‘circular’ viaducts, and a number of circular tunnels, both of which run like corkscrews, where the train circles round the loop, crossing back over itself and, coincidentally, providing perfect opportunities to take a photo of the front of the train from the back, as it passes back across you, up above or down below.

This is slow travel: ninety miles in over four hours, inched and clawed up the mountain. It’s the first time i’ve sat on a train and watched a glacier inch past, possibly the only thing moving more slowly than the train. I do so in comfort, sipping on a chilled Swiss white wine, enjoying this sense of hiking without the boots and with lunch served as we go.

Trains are built by inches, consumed by miles: each sleeper plotted and laid, each rail cast and welded, hammered and tensioned, bedded and pinned, part of the whole, pound by pound and one day at a time. Railways are products of vision and hope: often privately financed and highly speculative, made possible by survey and prayer. I imagine the journey the pioneers would make: walking these mountains, past these lakes, across this glacier, their eyes narrowed in the glare and wind, superimposing horizontal lines on the landscape, dreaming of steel and steam, envisioning tunnels and bridges, hoping for profit.

There is nothing more true than this: the Swiss love a tunnel.

We have tunnels in the UK, some of them old, some of them impressive, a few of them long. But they are things of convenience, rarely beauty and pride. By contrast, the Swiss are subterranean by nature and necessity. They tunnels to the extreme. One tunnel i pass through is 57km long, so long in fact that, on that evening journey, i am surprised to emerge into the dusky light at the end, so convinced was i that night had fallen. These tunnels are hewn and blasted often at great cost: their accomplishments are measured by feet, years, lives and depth. Few were built without great cost in all four.

I have spent a week exploring Switzerland by train, a dependably relaxed experience as the reputation of Swiss trains for reliability and comfort is well deserved. Travel by train gives you a great sense of distance: as the miles, hours and days rack up, you have a sense of connection and traverse, something that is fractured by air travel which, by contrast, is disconnected and ambiguous. You board: the doors are sealed and the cabin pressurised. Some time later, you land and decompress, disgorged into a new space, but the spaces are abstract, disconnected, disjointed, dislocated from any sense of geography. By trail, you travel the arteries, you feel every mile as you watch the fields pass by. The only disconnect is caused by the tunnels: slow blinks as you see fields. Black. farms. Black. Mountains. Black. A valley. Black. Another farm. Black. Suddenly a break in the tunnel and a flash of green: a deep gorge. We exit the tunnel straight onto a bridge, over a cascading mountain river, a glimpse of some trees, a couple of houses hidden in this deep cut lost world, then back into the tunnel.

Where tunnels deep, bridges soar: we are carried over the landscape, launched across voids, catapulted into new spaces, apparently floating and free. Bridges connect: they literally level and equalise. We use the word to imply commonality and connection.

Unlike planes, which are segregated from society and locked away in secured fields, trains belong to the landscape that they serve. The main lines connect cities and towns, with branch lines bringing villages onto the network, but alongside the mainlines lie the sidings and depots. Almost every village we pass has a station, but also a siding, often a warehouse or sometimes small goods yard. These are generally old buildings, staging posts in the distribution of food and industrial goods. I suspect that today, many are surpassed by the ubiquitous shipping container, which provides both transport and storage as it goes: no need to unpack a train and store sacks in a warehouse when the warehouse comes with you. It’s a small but symbolic aspect of change, that a simple idea revolutionises trade and travel, and, as it does so, aspects of the built environment become redundant too.

We see this everywhere: railway infrastructure, like all architecture, is subject to purpose: as purpose changes, so too must the architecture adapt and change, or become derelict and redundant.

Some of these rural station buildings have become cafes or even houses, some lie waiting, others derelict. In almost every siding sit flat bed carriages, some empty, some bearing shipping containers, some clearly unused for years, many still active. Indeed, the COOP, the chain of supermarkets i see everywhere, has it’s own fleet, branded with letters and images of fresh produce, it’s distributed network clearly reliant on the railway, as is much of Swish life.

Not only does Switzerland, a relatively tiny country, have one of the densest railway networks in the world, it also has one of the most used networks, with many Swiss using trains on a daily basis, partly aided by the fact that the trains are so punctual, so reliable, so convenient. Indeed, some places are barely reachable by road, so rail can be the only option.

As a traveller, the most convenient innovations are free WiFi at the station and a superb website, that allows me to plan any journey in minutes. Convenience is key to uptake when it comes to railways.

Back in Tirano, i have my back to the rusted hulk of the retired locomotive: i look out over the goods yard behind, where a new train is working. It’s small, bright orange, managing to look both youthful and breathless at the same time as it eagerly shunts around single carriages. It looks like an excitable puppy, desperately chasing carriages around and trying to please. Steam trains work slowly: indeed, to ‘build up a head of steam’ is a phrase we use to imply that it takes time to get up to speed (even if, once at speed, the power is palpable). Diesels, by contrast, perform from the word go, but are somehow less romantic. Part of the thrill of steam is the sense of barely constrained energy: the steam engine is seen less as a mechanism to create power, but rather a mechanism to somehow contain and channel it. The steam train is the contemporary shaman, taming the power of sprites and ogres: somehow protecting us and harnessing energy.

As i embark on the Bernina Express, sat in my panoramic carriage, pulled by the latest express, i watch as the steam train falls out of sight, dreaming of a pioneering age, but an age that has passed. Railway journeys are about change: evolving landscapes, constant renewal, journeys through miles and our own minds.

8 Responses to Switzerland: Trains of Rust and Power