Aspects of the #SocialAge – Part 3 – Permanence is Ending 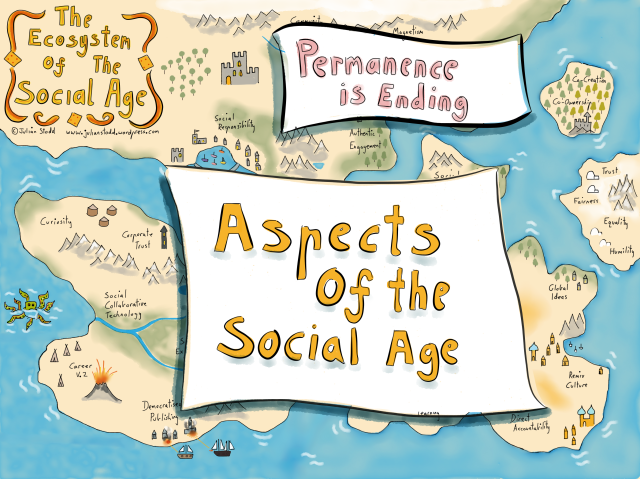 In our mental construct of the world, we rely on many things staying the same: as we learn these things, we codify them into schemas which we use day by day, week by week, year by year. These schemas allow us to drive, order a coffee, and interact with other people on a daily basis. But the change we feel in the Social Age can invalidate the scripts: we can end up having conversations where each person has a different view of reality.

Take the notion of career, for someone who has spent their working life in an organisation, as they talk to people who are just coming into the business, a new starter, they will have one idea of career that is not matched by those young people.

People starting out in the world today, where any fiction of career will consist of dozens upon dozens of different jobs, some solid, some stable, some reckless, and many impermanent, the mental construct of career is fundamentally changed.

But it goes deeper than that. The nature of knowledge has changed. The notion of education is changing. The notion of permanence itself. Whilst academics debate the validity of Wikipedia, people to whom this type of knowledge is native are simply using it, and using it to elevate their ignorance to whole new levels.

As we move ever deeper into the Social Age, some aspects of change are easy to see, but many will catch us out, and we’re just the start. The survival skill we need to cultivate is an ability to relinquish control, to let go of things that have served us well, and embrace the uncertainty and risk that the new world brings.

Impermanence is another aspect of the Social Age.

The blog is on holiday for two weeks: i’m sharing a series of ‘aspects of the Social Age’ until normal service resumes.

Author, Artist, Researcher, and Founder of Sea Salt Learning. My work explores the context of the Social Age and the intersection of formal and social systems.
View all posts by julianstodd →
This entry was posted in Social Age and tagged Aspects of the Social Age, Career, Change, Future, Leadership, Permanence, Perspective, Social Age. Bookmark the permalink.