There’s an important phenomena called elasticity that we need to understand as it’s an insidious energy of organisational change. Elasticity is where we bend and sway in the breeze, giving an illusion of movement whilst always being rooted firmly in the ground. Looking out at a field of corn, it’s in motion, but it’s only in motion within a certain space. The field itself is not moving anywhere. It’s busy, but stationary. 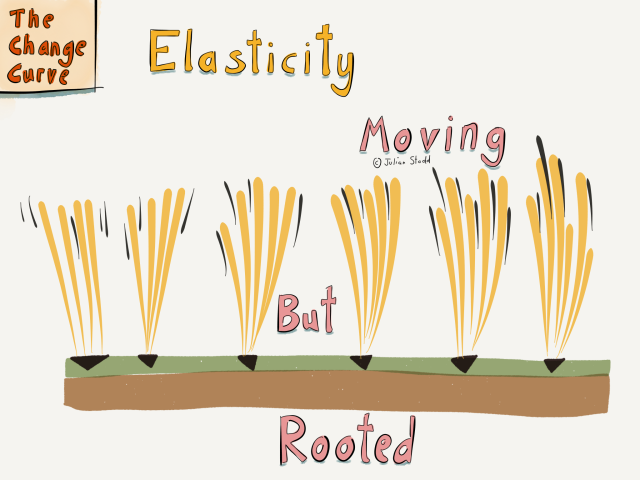 Elasticity is a safe behaviour: it gives the appearance of being engaged without having to actually engage. It’s the space for ambiguity that allows us to see which way the wind is truly blowing. Constrained organisations will exhibit elasticity at every level: not because people are disengaged, but because they are not fully engaged. They are in a middle space where they are engaged, but not owning. Present, but not invested.

The Dynamic Change framework describes a route to transformation: an early hurdle that it has to overcome is elasticity.

The elasticity isn’t ignorance or laziness, it’s rooted in the fractured Social Contract of the Social Age. Following years in which organisations have broken bonds of trust and treated people like disposable human capital, people themselves have adapted. In this adapted space we are willing to engage, but only up to a point, and only if it earned.

We can view elastic behaviours in two ways: aspirations of intent and a general shuffling of feet, and attempts to get ready to move if not actually move, or we can view it as something more challenging, an attempt to obfuscate the system, to keep ourselves within the crowd, but our head firmly beneath the parapet. if the second behaviour exists, it exists because it’s been learned as a response to organisational unfairness.

Elastic behaviours give us an opportunity to engage, if we recognise them for what they are. Interest, but not engagement. Our role is to feed that interest and provide microscopic spaces for engagement. Get people hooked on change.