An Architecture for Learning Technology

I’ve written before that the Social Age is about an envolved sociology, not simply new technology, but technology is a key part of it. For many organisations it’s the first place they turn, trying to procure a technology solution for what is essentially a social problem. Technology is not the answer, but it may facilitate the answer, and to let it do that I’m sharing the first draft of an architecture for learning technology, intended to help organisations choose not a single system, but rather to create a diverse ecosystem of technology in service of people. 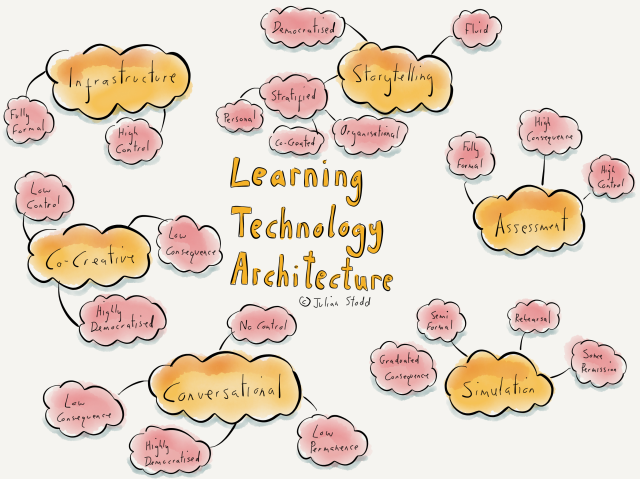 I’ve split this initial map into six sections, six aspects that the organisation should try to support. The first is conversational spaces, technology that facilitates us collaborating and communicating at an everyday level, the next is technology the co-creation, the thing we do within our communities. Third is core infrastructure technology, which we still need, and fourth is storytelling, technology to enable us in shaping and sharing a narrative. Next comes technology for assessment and simulation, two aspects to do with learning and performance.

For each of these spaces we can consider levels of consequence, permanence, democratisation and formality. We need to differentiate between them all as we are looking to different behaviours in each.

Conversational spaces need to be highly democratised, under the control of the individuals that use them, not simply the control of the organisation. If the organisation tries to control them too heavily, it simply makes them formal, and therefore useless to us as individuals when there were so many other places we can have our conversations. Conversational spaces need to be low consequence because they are low reflection, we are not looking for fully formed thoughts and permanent opinions, but rather a high fluidity and space to change. Conversational spaces should be many and varied because the point is not to create the final story, but rather to communicate every minute of every day. Ideally the organisation will exercise little or no control over the spaces.

Co-creative spaces are where communities will live and carry out their sense making activities. As such they still need to be highly democratised, mainly under the control of the communities and individuals themselves, they still need to be low consequence as they are the spaces where we figure out what to do about something, and how we feel about it. Co-created spaces are not under the control of the organisation, they are not formal learning spaces, but rather the places where learning may occur if we create the right conditions for their success. As such, again they need to be low control spaces, where the organisation seeks to facilitate, not control.

There are many formal technologies which can fulfil the technical needs of a co-creative space, but also many lightweight, free, and social systems which can do so. The formality of the system will significantly impact engagement, so it’s worth choosing carefully and remaining highly fluid.

Core infrastructure systems still have a place in the Socially Dynamic organisation, they can be fully formal and highly controlled. The key thing to recognise is that the infrastructure system is not the conversational system, nor is it the co-creative system. The requirements of each are fundamentally different, which is why I say one system is unlikely to fulfil them all. Don’t get me wrong, one system may have all the features that we see, but it will lack the social permission, and social permission is everything when it comes to engagement. Put simply people are unlikely to fully engage on fully formal systems.

The fourth type of technology that we need is the storytelling. In other parts of my work you will see me describe the three levels of narrative: personal narratives, which are the story of learning and change over time from an individual perspective, co-created narratives, which we have touched on here and are the conversations that take place within our communities, and organisational narratives which, in a Socially Dynamic organisation, are written as a meta-narrative from the organisation taking into account the first two levels. All too often organisations write their own narrative and try to impose it on to people. 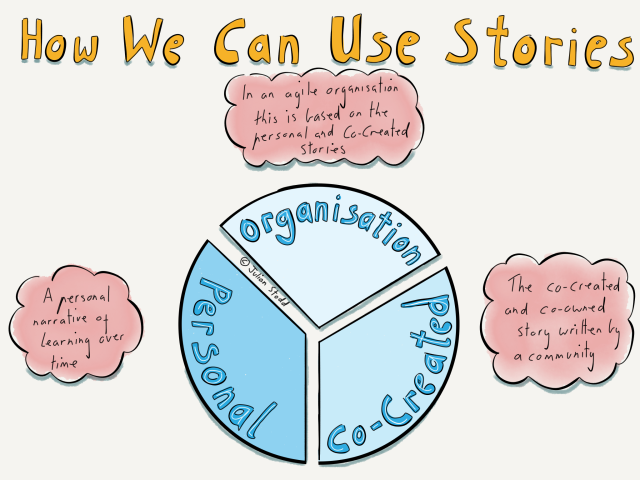 Assessment technology will be fully formal, the decision for the organisation is not which technology to use, but rather to address the underlying learning methodology, and decide how and when to assess at all. Lately we have seen the emergence of many game type technologies: but the mechanics of games will not create great learning, we will only create great game-based learning if it is done as part of a solid learning methodology and takes into account underlying game dynamics.

I’ve included simulation technology as a broad category as increasingly we will see simulations utilised as part of an effective learning approach. Simulations sit well within a scaffolded social learning design, especially if we use structure to surface the narratives of how decisions were made, not simply focusing on operational outcomes.

7 Responses to An Architecture for Learning Technology