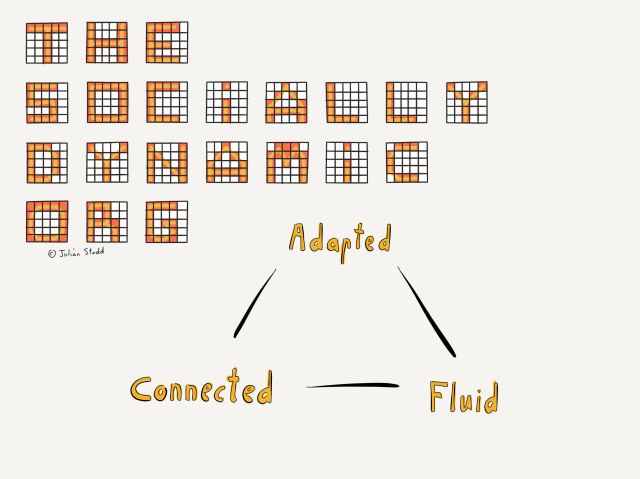 Why Socially Dynamic? A fully adapted organisation is highly connected internally, and widely connected externally through appropriately permeable walls. I say ‘appropriately’, because there are still walls and boundaries, but in certain contexts they are highly permeable. The Socially Dynamic organisation will host a wide range of widely dispersed and tightly interconnected communities, some highly formal, many semiformal, and some entirely out of the control of the organisation. These wide and varied sense making spaces will lie at the heart of the organisation’s ability to adapt and perform. But they don’t exist by accident.

Certainly we need the right infrastructure: social technology, democratised, fluid, and highly adaptive. This needs to be provided by an IT function which is facilitating and enabling: willing to learn not simply to control. It will be overseen by an HR function which is itself both scaffolded and enabling: no longer simply the authoritative voice of the organisation, the mechanism of control, but rather highly facilitating, curious, and willing to listen as much as to speak.

The technology infrastructure is what will permit the communities to thrive, but the technology is not the thing in itself. Communities will form when they have both space and permission: space can be provided by technology, but it’s more than that. It’s shared value and purpose. When the spaces available, and permission has been covertly granted, not subversively seized or claimed, then it’s able to find its coherence. Trust needs to be earned, not just between people, but between people and the organisation itself. You cannot mitigate or mandate for trust. You can simply provide the conditions within which it is earned.

To be Socially Dynamic, not simply optimistic yet Constrained, the organisation must have moved beyond the mindset of control. In a constrained organisation there is still a sense that spaces can be moderated beyond simply that which is needed to remain within the law. There is a sense that we can somehow own and control the story, whilst in fact to be Socially Dynamic we must simply be willing to read the story once it is written, and to earn a permission to contribute to and co-create the story.

In the Adapted organisation almost everything is highly fluid: the vertical mechanisms of control that characterised the old Victorian type of institution (and many of today’s legacy companies), hierarchies of power and control, are replaced by scaffolding and interconnected structures. There is a fluidity of role, power, and capability. Strength is nested more within high functioning communities than simply within a small number of highly talented individuals: indeed those individuals become facilitating of the community itself, and are recognised and rewarded with Social Authority.

This is what defines and distinguishes the Socially Dynamic organisation: it has a broad and distributed strength, a broad alignment of its internal energy. Internally it is connected both through formal organisational structure, clear hierarchy and open lines of communication, a cocreated culture of fairness and equality, and semipermeable walls to external communities.

The Socially Dynamic organisation is safe, but not safe by throwing up walls, owning conversations, denying permission, and exercising significant levers of control, but rather it is safe through its ability to take on risk within safe spaces and use it as the fuel that drives the change. It will clearly understand the difference between learning spaces, rehearsal spaces, and performance spaces, varying consequence and permanence within each one.

The constrained organisation may be able to adapt to changing market circumstances or new technologies, but it does so at a cost and it gets breathless whilst it adapts. The Socially Dynamic organisation is inherently able to adapt, not through strength but rather through fluidity. It’s this theme that I’ve been exploring the work around Black Swans and the limits of hierarchy.

Systems which adapt through strength, and strength alone, will be brittle. They may be highly capable within a narrow space, excellent responding to the known challenges they face today, but susceptible to asymmetric competition and unknown challenges.

This is why I would lay down the challenge to all of those existing mechanisms of control, all of those hierarchies of power: a challenge to HR, to learning and development, IT, to legal, to compliance, to marketing, every entity that forms an internal subculture, every empire and power base. The things that make a strong today may simply make us lethargic to the change of tomorrow.

In the Social Age of ability to perform and to thrive lies in the strength of our communities: the communities we need to be excellent ourselves and to strive to be better, but it is the way we use that expertise and knowledge to help others succeed, to help our communities to be coherent and high functioning, which helps us all to win.