I’m #WorkingOutLoud this week on a paper entitled ‘Black Swans and the Limits of Hierarchy’ for a conference later this year. So called ‘Black Swan’ events, characterised by Talib, are unknown and unknowable, or in the language i use in the paper, are ‘Unknown Scripts within Unknown Frames’. The notion of Frames and Scripts relates to spaces and mechanisms of power, and it’s that which i want to unpack a bit further today. As i say, this is #WorkingOutLoud, so shared as a fragment of wider writing, not necessarily coherent in itself. 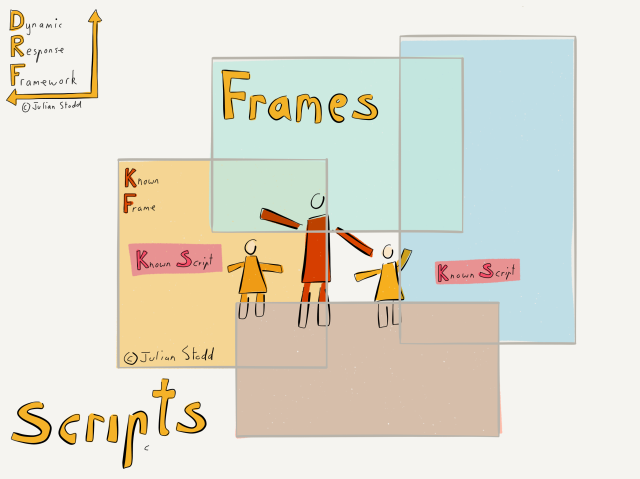 I was mugged in Madrid last week in a particularly creative manner. Creative as the architecture of the event was carefully choreographed to utilise Known Scripts operating within a Known Frame, but delivering an unknowable outcome.

The event unfold like this: two teenage girls came up to me, grabbed hold of me, and started screaming, accusing me of stealing their mobile phone. A crowd gathered, poised to intervene. Police were summoned. Police turned up and demanded i hand over my personal possessions into their safe keeping so that they could sort it out. When i refused, it got more complicated.

Let me stop and replay this, couching it in the language of Frames and Scripts.

I was walking home in a strange city, late in the evening, consulting the map on my phone, but carefully, as i was aware of being in a busy area full of bars. Two girls saw me and saw the colour of my mobile phone case (orange). By observing, they were able to ascertain that i was alone and, presumably, slightly lost. When they first approached me and started talking in Spanish, i assumed they wanted to know the time, but when they immediately grabbed me, it became clear that they had subverted my know Frame and put me into a different one.

My frame was social: i was walking along and two young girls asked me a question. The Known Script required me to acknowledge their response, although, being slightly wary, i didn’t get my phone out, but told them the time from memory. In my world, they should have realised i didn’t speak Spanish, should have smiled, and moved on.

When they grabbed me and started to scream, they subverted my Known Frame of ‘social encounter to ask the time’ and substituted ‘mugging’, but, rather annoyingly, they cast themselves in the role of ‘victim’ and me in the role of ‘perpetrator’. In this case, social convention (triggered by the Known Frame) reinforced their script: from the external perspective, two young girls and one older man gave obvious social signifiers: them as victim, me as the evil robber or worse.

Screaming and crying gave further social cues. But there was more at play here.

They kept pulling me hard, tearing my coat, and my natural inclination was to shout and pull back. The problem at this stage was this: if i shouted, if i hit them (triggering further and unwanted Known Scripts) i would have reinforced the role they had cast me in.

At this stage, we had an audience. Had i fought back or shouted (both things can act as triggers for Known Scripts) i would have been more likely to trigger further Known Scripts: see an older man hit a younger girl, or throw her to the ground, or start running from a screaming younger girl and we may have triggered Heroic types of scripts, given even more power through their social validity and justification).

So i stayed still and quiet.

This did not resolve anything, but it did stall the script. Now i was in a Known Frame, but with elements of doubt, and cast in a presumed role that i was not reinforcing.

Fighting or shouting escalate the script. Motionless and silent stall it.

But you can fight back in other ways: my challenge was to shift us into a different frame and to initialise different scripts. It seemed unlikely that i could recast the whole script into ‘Tourist being mugged by young girls’ as nobody spoke much English and the visuals were against me. So instead i sought allies.

I started speaking quietly to various people in the group of 20 or so locals asking them to call the police. Most ignored me. One made a phone call.

I kept talking to him, every minute of so: thanking him and asking questions.

Asking questions triggers a response, especially if they are open. ‘When are the police coming’. ‘thank you for helping me’. And so on. We started a dialogue.

Now the Frame is less clear and the script is thoroughly stalled: as perpetrator, i should be shouting, fighting or running. Not asking for the police. the girls were still screaming and pulling me, but i was, to the best of my ability, ignoring them and simply trying to stay on my feet.

Several locals started telling me to hand over my phone: i simply kept repeating ‘police’, so whilst i wasn’t winning, i was stalling.

The ‘Police’ script represents formal authority: even if not there with flashing blue lights, by asking for the police i was invoking a totemic status: would the robber ask for the police? Whilst i had no power to remove myself from the Frame or to escape the script, i did have the power to stall their script and start some parallel ones running.

Now i had a friend: i had invoked a ‘Thank you for helping’ script, which made it harder for him to walk away, as long as i did nothing to restart the ‘robber/victim‘ script.

Next it got more complex: a large man turned up and said ‘I am police’.

Now, i’m no expert, but large, fat, sweaty and wearing jeans did not fit my mental model of police: he failed to invoke the script in me and hence was attributed no natural power.

The frame was new: mugging in progress, police in attendance, suddenly everyone else is spectator.

He demanded my belongings and i demanded ID.

I was losing the initiative as they now had two scripts playing against me: a victim script and a formal authority script.

So i started shouting at him. In terms of scripts, this is risky, but different than before. Had he been in a uniform, i would have been in trouble, but he wasn’t.

Nobody is likely to intervene in a fight between two men late at night if they don’t have previous social ties in place, and, indeed, they didn’t. Everyone was content to maintain a ‘spectator’ role as the entertainment played out.

Fat man was now stuck: he had no further authority to invoke, no badge, no trappings of power, and no backup. When he got too close, i was able to use predictably body language by holding my hand in front of his face and shouting ‘no’. That’s clear in any language, and he didn’t have the nerve to hit me, which would have reversed the script, with me as victim.

So there we were: stuck, but things playing in my favour.

Their imposed Frame and imposed Script relied on momentum. Mine relied on building allies and stalling.

Then the real police turned up.

At this point, as the lights appeared in the distance, one girl ran away and the fat man walked off.

She attempted to reframe the situation by letting go of me, clasping her hands in prayer and looking me straight in the eye, pleading ‘please, please, no police’. This was a welcome development, but interesting.

For the audience, the play was over: the roles clearly asserted. She was trying to invoke the more typical and socially defined role of young girl and victim, from body language to eye contact. And to her credit, it worked: i found i couldn’t shout at her and told her just to go away.

Several locals suddenly became my best friends, inviting me for a beer.

The point is this: Frames are imposed, not natural. And they can be redefined. And Known Scripts have power, which can be either imposed upon us or invoked by us.

Crucial to the question of Black Swans and the limits of hierarchy is this though: once a frame is in place, all the scripts and activity happen within it. It’s very very hard to question a frame once we are within it, and this is the problem with category errors.

In typical conditioned and trained responses, we encourage and support diagnosis (determine the frame), action (within the frame, utilising scripts) and review (how effective was the action).

But Black Swans may have no known category, so we have two potential errors: one, they are misclassified as a Known Frame, triggering Known Scripts that may be entirely inappropriate or, secondly, we may be at a loss how to categorise them at all, leaving us unsure how to react.

Misclassification is almost more dangerous: because once we are in a Frame, and once Scripts are running, it’s hard to even realise it’s in play. Indeed, many failures don’t occur as a first order result of misclassification, but rather are complex and fundamental errors that occur down the line, when everyone is deeply trapped by the Scripts that were triggered by the wrong Frame.

Author, Artist, Researcher, and Founder of Sea Salt Learning. My work explores the context of the Social Age and the intersection of formal and social systems.
View all posts by julianstodd →
This entry was posted in Adaptability and tagged Black Swans, Crime, Drama, Fight, Madrid, Mugging, Narrative, Power, Robbery, Scripts, Social Age, Victim. Bookmark the permalink.

16 Responses to Mugged in Madrid: Black Swans, Scripts and Power