Madrid is new to me: my first time in the city, my first time in Spain in fact. I speak no Spanish and have no mental map of the city. The best i’ve got it Google Maps and Wikipedia, which would normally be enough, until my iPhone died. 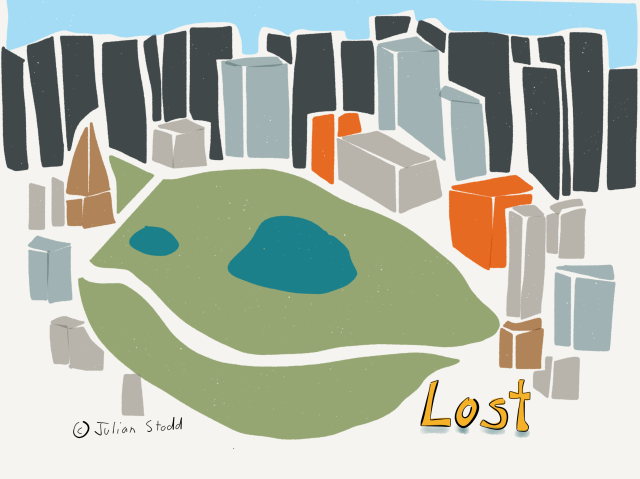 Normally, i relish being lost. Not lost as in “middle of the jungle” or “out in the desert”, but rather lost as an explorer. Out of the space that i know, finding my way around a new one. The process of exploration is familiar to me (as is the sense of being lost!): you start with one reference point, then your feet take you on a journey. To start with, you are connected to the space that you know only by a trail of breadcrumbs, but gradually, you construct a map.

Take Madrid: rapidly i tune into the concepts of the city. It has plazas, squares, often attractive, with coffee shops and bars, as well as main arterial commercial streets. The rest of the map is filled in with winding medieval feeling side streets. So: get to know the main squares, use the commercial streets as linkages, and explore the interesting side streets to your hearts content. Hard to get too lost in the centre then.

And yet such confidence is hubris. Amsterdam is a city i get lost in often, not because i don’t know it well (i know it pretty well indeed), but because the streets all curve, so you start heading north and gradually, insidiously, end up heading east. Or south.

With my phone dead in my pocket, and the deadline for a meeting looming, i had little choice but to activate PLAN B: ask a local.

Lacking even the simple Spanish for ‘left’ and ‘right’, i found the most useful directions were generally the non verbal (flailing to the left, pointing vigorously to the relevant street) or architectural (‘church, church’, or ‘palace’, which were reasonably easy to figure out with enough gesturing).

After some false starts, i recognised a restaurant, and my mental map snapped back into place: i was no longer lost. I was found.

These notions of ‘lost’ and ‘found’ move beyond mere geography. Take quantum physics. Do i know a lot about it? No. But do i have a rough mental map? Yes. I can kind of find my way around, but don’t go asking me about all those small side streets.

In fact, as a proud generalist, i have a lot of sketch maps, but very few truly detailed ones. We use the metaphor of exploration when talking about learning for good reason: it’s about location.

Be it as simple as understanding where the mountains are, or where the key concepts lie, we need frameworks, we need schemas, and we need an ability to navigate.

In the Social Age, the communities of locals who help us do it may be connected to us through technology, but the principle is the same.

This understanding can inform a lot of how we think about learning: certainly how we think about Scaffolded Social Learning. Under this approach, we help people understand where the squares are, where the arteries run, but we make no attempt to map the side streets. Instead, they do that for us and sketch a path as they go. When we bring all those paths together, we get a map: co-created and co-owned.

Author, Artist, Researcher, and Founder of Sea Salt Learning. My work explores the context of the Social Age and the intersection of formal and social systems.
View all posts by julianstodd →
This entry was posted in Exploration and tagged Church, Cognition, Exploration, Found, Language, Learning, Lost, Madrid, Map, Maps, Schema, Social Learning. Bookmark the permalink.