The mass of architecture simply delineates space: It subdivides and subtracts from the sum total of the world, partitioning off a series of spaces purposed for ritual, function or play. Be it mud walls, steel doors or stone ramparts, the purpose is the same: to define what is inside as separate from what sits without. To claim space and protect it from sight, from access, from knowledge. Architecture, as with any artefact, is fallible and corroded: the hands that raised it pass into history, leaving the thing without purpose, or reclaimed and repurposed into newer, more contemporary understanding. Sometimes buildings fall to ruin, their purpose lost entirely, bereft of their meaning, their spaces bleeding into the outside world or claimed by plants and bees.

The temples of Cambodia are epic: Angkor Wat itself the heaviest man made structure in the world, hundreds of structures, vast waterworks, a pressure of engineering so large that it shattered the infrastructure of the empire. An empire tumbled by it’s stones, themselves now tumbled to ruin.

Within the temples, there is a taxonomy of design: themes that emerge in early centuries, adapted and corrupted through later structures. There is a coherence to the layout, discernible as you wander through successive sites. It’s typical with religious structures to sense this progression: from the outermost public spaces, to the inner sanctums, private and secret spaces, reserved for a few and imbued with deep meaning.

Even in their ruinous state, the sense of this journey is clear: the geolocated sanctity survives.

Ruination itself is appealing: the sight of fractured arches, broken pavements and buildings stripped of their cladding and paint, reduced to rough hewn surface and drawing weeds, this picture somehow works. Whilst not how the architect intended, we retain the sense of space whilst softening it with a semi natural veneer, a facade of nature painted over urban space.

In some places, the clock has been rewound: buildings tumble and walls fall, but as UNESCO and other agencies colonise the space, they clear and rebuild, sometimes with sympathy, sometimes with brutalistic intent. Concrete is alien here, yet in places it patches fractured stones, provided a modern context to ancient craft. This tinkering with ruination is troublesome: it’s no longer an authentic dereliction but rather an interpretation of it: it becomes ruin as art, appealing to our aesthetic sense of what ‘ancient’ should be, without having the validity of patina and chronology.

The authenticity of ruination lies in the passage of time and the recognition that, whilst beauty may flower in decay, the only end point is dust. 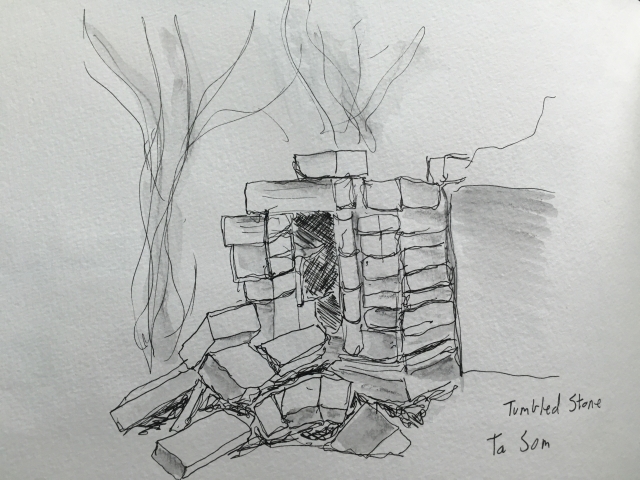 The most dramatic interaction of nature and structure is the trees: as green shoots and white roots penetrate the dark spaces between stones, they swell and grow, hydraulic pressure pushing outwards on the stones, forcing open cracks, splitting rocks, rolling stones in cascades into abstract piles. The trees destroy, and yet form the pinnacle of attraction for may tourists: immortalised in Tomb Raider, the sight of doorways framed by strangulating roots and walls buttressed by trunks is appealing, a snapshot of decay captured in film and memory. Somehow transient: these trees will fall, will rot, and no others will take their place. Preservation cannot allow the corrosive forces to continue, unless they persist as fibreglass fakes, forever captured in the act of destruction, but bereft of their destructive power.

Strangely it is the light that is most significant in this operatic tale: the Cambodian sunshine, at dawn or dusk, deeply orange, strange and low, the interplay of light through trees, it’s in these moments that the temples are at their most melancholy.

Perhaps because light itself abstracts: as the sun rises, we start wth simple silhouettes, before the detail is painted in, and at dusk, the glooming sun robs detail from carving, steals everything except raw shape, and paints it against a backdrop of a sleepy landscape, a tired and dusty panorama. Light brings light and also shines upon this curiously frozen space.

The relationship between macro and micro is readily apparent: vast spaces, vistas and friezes filled with tiny detail, but painted on endless canvas. It overwhelms the senses, as no doubt is the intent. It’s a richness that is only available with fifty thousand workers on hand to carve your legacy into rock, stories now softened and erased by acid and abrasion, left only as carving for school kids to run their hands over, to marvel at crocodiles and spears, to be photographed in guidebooks and tagged on Facebook. I Ozymandias, King of Kings…

There is a beauty in the ruins of Angkor Wat that is hard to explain: sure, it has the majesty of scale and the venerability of age, but it’s more than that. It has a complexity of space and an honesty of intent. It’s is a landscape painted at scale.

Architecture is more than just building a structure: it’s a vision of space.

The temples at Angkor were built with a purpose that has now largely gone, but they persist as spaces, separated and subdivided, retaining a capability even in decay.

And in the spaces that remain, you can imagine. You can hear the voices of the builders and monks long gone: the shadows and echoes of a bustling past, because these spaces were venerated but also vibrant. 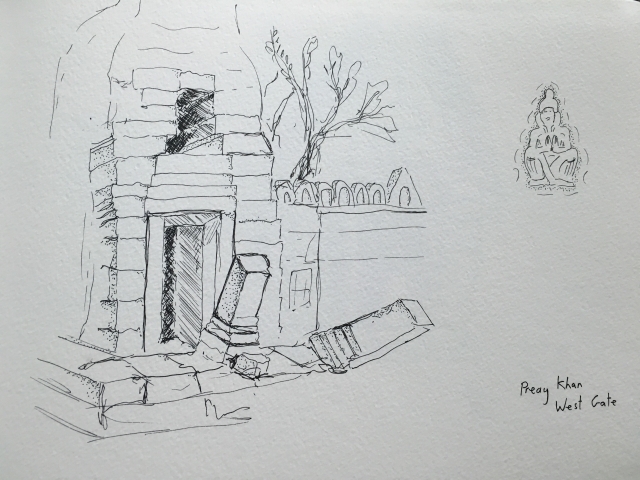 Permanence is an elusive goal: the builders of Stonehenge, the Pyramids in Egypt or the temples in Cambodia may have strived hard to achieve immortality in design, but they, like all things, will come to dust. Sure, their journey may be longer, but without conservation, stabilisation and reinterpretation, they erode and fail. And even with out best attempts, nothing lasts forever: their is a time at which the thing becomes a parody, a faint shadow of the thing. In time, all meaning is lost, all energy decayed.

For now, the temples stand as monument and memory. Magnificent in their use of space, superb in their scale, beautiful to behold in both their macroscopic might and microscopic detail. Architecture triumphant, at least in this timeline. Beautiful to behold.