Posted on December 8, 2015 by julianstodd

There’s an obsession with juxtaposition in New York: a co-created skyline that intersperses urban dereliction, industrial heritage, vanity architecture, functional service, tourist enchantment and dog walking in a complex narrative that weaves through Manhattan in a complex and ever evolving tangle.

The Piers on the West side stratify and capture every state as they crumble and change: they are the physical link between land and sea, the stitches that give the city structure and sustenance, protruding into the river in serried ranks for mile after mile. They are the foreshore extensions clawing out for passing trade and custom: permanent in their mass, but home to transient communities of ever changing visitors from China, Europe, Asia and a hundred other ports that specialise in the transmission of boxed DVD players, and wide eyed tourists. But their layers of meaning are complex: their purpose in transition.

They have diversified to survive, or fallen into shadows of their former selves. And it’s the juxtaposition of those two states that i find so fascinating.

There is no subtlety to Pier building: they are not graceful, but rather most charitably described as robust and brutish. No graceful Victorian cast iron here, but rather masses of piles, rock hard exotic timber, hammered into the silt, rammed into earth through force alone. They combat the elements and are elemental. Not ten or twenty posts, but hundreds, hundreds of posts colonising a broad rectangle of water, anchored to shore at one end, but reaching out into the river.

How do i know? Because bones survive, when all else has been eaten, consumed by the elements, consumed as hardcore for road foundations, consumed by fire. Along the length of the riverbank, the picture is the same: some survive, many have perished, swept away by entropy and relevance, no longer needed, no longer maintained, no longer cared for or loved for their function or utility. A marriage of convenience wrecked on the foreshore.

Today, the ruined Piers line the shoreline like gravestones: symmetrical and squat, slowly sinking reminders of what once was and, maybe, what may be once more. In these spaces, the piers exist as final reminders, postscripts to an industrial complex that has moved sideways, out to the suburbs, or out of the continent altogether. These are the final markers of decay.

But this is just one end of the story: a final stop in the lineage. Before this final degradation comes the semi dereliction: the most poignant of all.

Semi derelict is neither one thing nor the other: redeemable, but increasingly unsalvageable. These are the spaces fenced off, but still trespassable. Cavernous buildings lying empty, roofs decayed but not collapsed, vast expanses of decking, holed in places, tipped at angles in others, but still navigable, still holding out potential for use. Or maybe just a memory of it.

These are battered spaces: often claimed by transient communities, for the storage of building supplies, for the temporary housing of junk and detritus that society does not want to throw away, but cannot bear to value.

In other places, they are nearing the end of their journey: on the East river i spy massive, splintered timbers, twisted by some vast force, half submerged. These structured to not gracefully collapse, but rather fight with every sinew and bolt, reluctant to slip under the water, desperate to persist.

Most innocuous is the crane: sat high somewhere around 70th street, it’s purpose appears to have been to extend a moving roadway out to barges or ferries. It’s all still there: the structure towers high, three or four storeys i guess, with elevated engine room and control shack, all painted black, all still remembering the promise of function. Beneath it, the moveable roadway itself, massively constructed of steel girders and giant timbers, maybe thirty metres long and eight wide. It looks like it ran on tracks, extended and retracted by the structure above, but it’s fared less well, partly collapsed into the water. Neither attached to the shore nor engaged with a ship. Purposeless and failing. 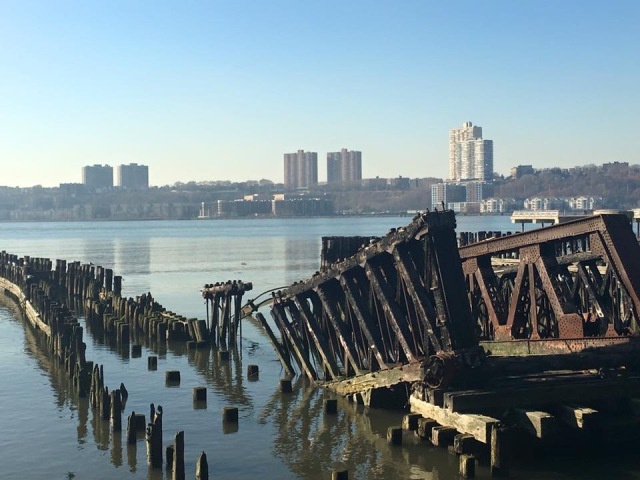 It’s not a sinister structure, but rather innocuous, set against a backdrop as it is of pale reflections of a blue sky in the towering glass structures and the playground opposite.

It’s utterly industrial, utterly intent on a single purpose, and yet bereft of function now that time has passed it by. I can still see hydraulic hoses and cables tanged around the legs of the structure and wonder, for one idle moment, if you could still fire it up if you broke through the fences, cut the padlocks and climbed up to the lofty control room, festooned in netting and dead pigeons. It’s a farcical notion, but tempting to think that, like an asthmatic dinosaur, it has one last gasp.

But no, it’s retained it’s husk only: the silhouette is coherent, but it’s functionally bereft. Seized, rusted, clogged, splintered, it’s powerless, purposeless, caught merely as a snapshot of what once was by a city too nervous to knock it down lest it lose it’s heritage, preferring instead to make it safe, to surround it with parkland and cafe’s, benches and streetlights. It remains, neither preserved not actively decayed: snapshot of history in an increasingly more relevant world.

I don’t much like it: not for it’s form, which bravely splits the skyline and persists in a shadow of former purpose, but for what lies underneath it.

The black spaces disconcert me: the gurgling, swirling, shadowed and lost spaces under these piers, under these structure, these are irredeemable spaces, flotsam and jetsam filled, murderous and lost to society. These are sewer spaces: necessitated by function, but not civilised, not tameable, not safe. These are the dark spaces in tunnels and subways, spaces that none but the most foolhardy urban explorer would even contemplate visiting. They are my nemesis: utterly alien, sinister and fearful. Later that night my sense of oppression grows as the metro train i ride growls to a halt in a tunnel, far from the station, and i find myself spotting graffiti in the dim spaces beyond the scratched windows. Illuminated by the transient light spilling out, brief respite from it’s lifetime of darkness. Hidden art, forbidden art. Alien, detestable art.

But today i move on, along the riverside and, when looking back, the sunlight transforms the scene: from this side the timbers are lit up, the rusts are warm orange and the scene transforms to one of a museum, quaint heritage, preserved for all to see as they sip their latte and talk about Breaking Bad.

We’ve seen the derelict and the semi derelict, the losers and the losing, but as i head South, i find the winners; the Piers that retain their original function or have found new ones, new relevant against a historic backdrop.

Architecture, even brutal industrial architecture simply defines and partitions space: it’s a discipline of division and connection, but always related to purpose. As it’s purpose evolves, the space tries to keep up, but often at the cost of convenience. There’s always a point of fracture, where the convenience can only be reclaimed by moving to a more suitable space. This is why buildings become redundant. But this redundancy creates opportunity too: purposes find spaces, just as spaces match purpose. So cavernous warehouses are repurposed to form car parks, basketball courts, music venues and playgrounds. Spaces are painted, lit, adapted, adopted and given a new lease of life.

Perception is everything: when purpose is lost, architecture blights the landscape, but with repurposing it becomes an asset, a natural resource to be exploited and evolved.

You can walk miles down the riverside: there are almost a hundred piers that i walked past in a day. Some vibrant, some changed and repurposed, some derelict, some functional, some simply shadows under the water. And over it all, the city has laid a new path: weaving walkways that represent a more playful dynamic. Not walkways, but promenades. Timbered, planted up, home to art installations and benches, cafes and viewpoints, these new spaces weave through the old. Often the paths split, dance and reform, merging a hundred metres down the line having detoured for a playful glimpse of the past and to the future. In several places the path juts out over the water, mimicking the Piers of old on a micro scale. Allowing you to change your perspective, away from the land and out over the water, looking back in. And it’s all about perspective.

New York is a city of juxtaposition: a city in constant change. The old, the new, the relevant, the repurposed, the tension between history and future, between wealth and dereliction, and the true cost of all this is often human. At the shoreline, in these most visceral manifestations of the city, it’s heritage and it’s constant striving for relevant, lie the Piers.

Author, Artist, Researcher, and Founder of Sea Salt Learning. My work explores the context of the Social Age and the intersection of formal and social systems.
View all posts by julianstodd →
This entry was posted in Adventure and tagged Architecture, Heritage, History, New York, NY, NYC, Piers, Reflection, travel, Writing. Bookmark the permalink.