The meaning of things can fall into history, even when the artefact itself persists. Like why we shake hands. Or give three kisses on the cheek. Or bow. Rituals, embedded in our culture, but not in any sense natural behaviours. They are invented, created, adopted and persist, even when the original logic and thinking of their origins has gone, faded by time. 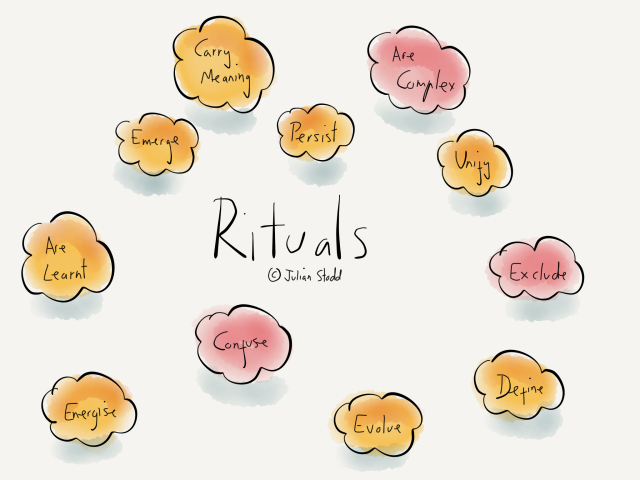 I was talking about this with a friend a few weeks ago, whilst on a video Hangout with her team. The emergence of a sign language, shared and used by the community was nonetheless new to me. Clear and obvious gestures, but as i was speaking, and suddenly saw movement on ten screens, people with thumbs up, it almost caused me to stop. It was a gesture of support, of agreement, and i’d recognise it from everyday use, but i realised the coordination and utilisation within this team was natural, simply an extension of spoken language into their everyday communication. And equally apparent was that the gesture is not widely used within my own distributed team: interesting indeed that our ‘habit’ is to turn video off and stick to audio.

So we lack two layers: the visual engagement of people nodding (or sleeping) and the gestural language layers that can surround the formal. Not peripheral, you understand, but integral to the communication.

This week, we are together in Wales, co-working in a farmhouse for a few days. A rare opportunity to sit in the same physical space. As we sat yesterday, we dialled in an absent friend on Hangout, from Belgium. She presented a great session and we turned on our video to wave and clap, at which point she introduced a new ritual: she shared that in a festival community she belongs to, people show appreciation by rubbing their hands together fast. As if you are warming them up. So we all rubbed our hands and it stuck! All day we replaced clapping with rubbing and, today, we continued our new tradition as a new member joined us.

And promptly wondered what on earth we were doing.

So much meaning is contextual, is learnt. We forget how easily communities can become exclusive, can develop rituals which isolate them, or indeed, empower them. These things are not accidental: we have to pay attention and, sometimes, nurture them.

In our own team, i think we need to use our video more, even when it’s not ‘needed’, but rather because we are missing a contextual layer of communication without it. And it made me think more widely, about how the well connected team my friend works in may be more highly functioning by sharing strong rituals and shared languages beyond the simply verbal or written.

I often counter the notion that face to face is better than virtual: it’s simply a retreat to what we know. it may not necessarily be true, or necessarily be true in it’s entirety. It may simply be that communication in these different spaces is, well, different. But that doesn’t mean we can’t nurture and develop it through paying attention to the rituals and languages that we may be missing.

My somewhat neglected draft manuscript for the book on music and learning explores some ideas around this: about the way we communicate in ways beyond simply words. Ways that we use gestural and tonal elements to our communication that enhance it in many ways. It’s not always what we say in pure words, but rather in the ways we communicate in words, in music, in movement, in it’s entirety that count.

Communication seems so simple, and yet it’s so easily eroded. Because it’s so tolerant of decay, because we are so resilient to degraded signals, like bad phone lines or noisy environments, we forget that it may still be far stronger if we make the effort to elaborate and enrich it, through every channel.

Author and Founder of Sea Salt Learning. My work explores the Social Age. I’ve written ten books, and over 2,000 articles, and still learning...
View all posts by julianstodd →
This entry was posted in Reflection and tagged Communication, Gestures, Hangouts, Ritual, Sign Language, Stories. Bookmark the permalink.