Posted on October 8, 2015 by julianstodd

I don’t know if it’s called ‘fly tipping’ here, but it was noticeable that, under the concrete flyways, between the monumental arches, at the dead end of endless tracks, the rubbish was piled high. Ironic really that the yard next door housed the slumbering tourist buses: the carriers of optimistically narrated fictions and potted histories, stories of origin and rebirth, sleeping here at journeys end for washing machines and bags of diapers. The other side: rusted taxis, dented and holed, retired from airport runs and drunk students, poor excuses and failed dates. 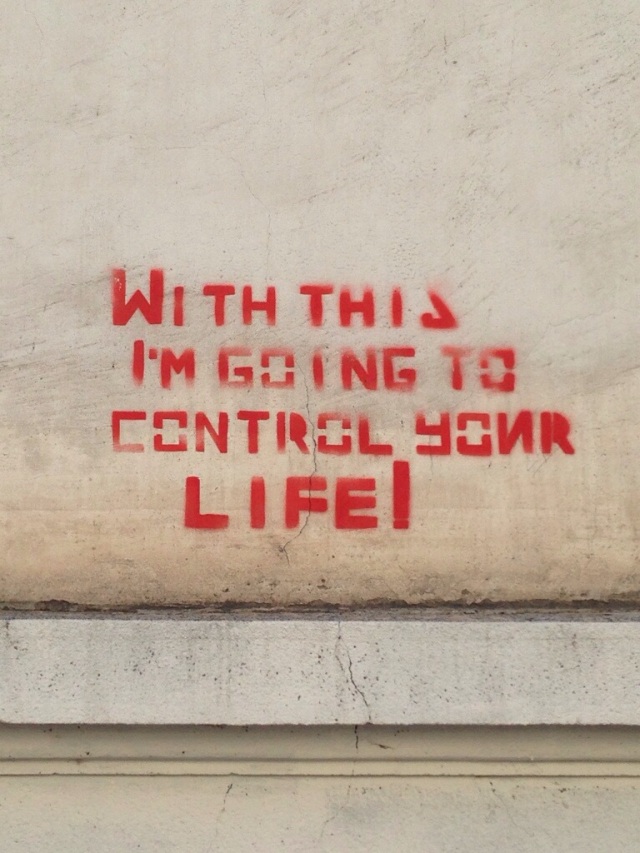 There’s a particularly American preponderance of auto shops: body repair promises that nevertheless seem to propagate decrepit hatchbacks and pimped trucks. Each roller shuttered maw gives onto darkly veiled caverns: my imaginations populating them with Russian gangsters and money laundering (whilst recognising the inconvenient truth that all they contain is the bent fender of a VW Beetle, awaiting repair or rehousing).

In England, the edgeland tends to be compact: thin layers between urban sprawl and rustic neglect, but here they stretch endlessly onwards, neither the manicured convenience of Downtown, nor the liberated academic grandeur of the college town beyond. Here, just the guts of society: the meat packing, ice breaking, importing, metal grinding, precision engineering, architectural salvage, air conditioning, bulk transport, concrete making, coffee roasting dregs of convenience and commerce.

Standing two storeys tall, the train was already winning some points for difference on height alone: rush hour back home means crowded trains, running late, costing a fortune. Here, the train was on time, i got a seat, and it cost me less than a Vegas coffee. I sat on the top deck, looking down onto the carriage full of bikes below: another difference from trains at home, where carriage of a bike is more often looked on as a favour than a service. I settled in for the ride, glued to the window for the traverse: from city to suburb, suburb to eternity. Trains carry both promise and utility: microcosm of society hunched over coffee.

Stations are transient by nature: constant flows, punctuated by lone islands, texting or waiting, lost or idle. In San Francisco that inevitably includes the homeless, the ever present sub culture, ignored and dispossessed, vagrant in this interlude between home and office, college and game.

As my train traversed the hinterlands of ‘Frisco i caught snapshots of the graffiti: flashing past too fast to photograph, but slow enough to read. Tags and art: territory and expression. Graffiti: the reclaimed and self proclaimed voice of the voiceless. The last voice to be stolen from us. The scratching, scraping, painted, sprayed, stickers and scrawled voices of dissent, disdain and despair. Not here the repurposed, commercialised, castrated and screen printed safety of graffiti as art, hung in urban white space gallery or reproduced on postcards and tea towels, no here is graffiti as scream and cry, violence and pain, ending on occasion in the screech of brakes and a darkness beyond the tunnels.

Graffiti aggregates in the hinterlands, migrates to the train lines that cut arcs through divided city blocks, forming some kind of dead ground, some kind of no mans land between the owned and the desolate. Nobody is here legitimately, unless hi-vis clad and on a work schedule: no, the urban artists are all piss and vinegar, dared and daring to cross the lines, cross onto the lines, cross a line and speak in voice uncensored and lit up by reclaimed freedom and social recognition to be the one to lived, the one who was heard. The voice eternal.