I’ve been sharing a Framework for Change in the Social Age: it’s intended to be a practical view of how organisations typically respond to change and how, using social mechanisms and approaches, we can ease the journey. The Change Curve identifies three states that the organisation may inhabit: ‘resisted‘ to change, ‘constrained‘ internally, or ‘dynamic‘. We are aiming to reach the dynamic space. Today, i want to explore the first space in a little more detail: it’s characterised by the Antibody Effect, where the organisation actively preserves equilibrium and the status quo. 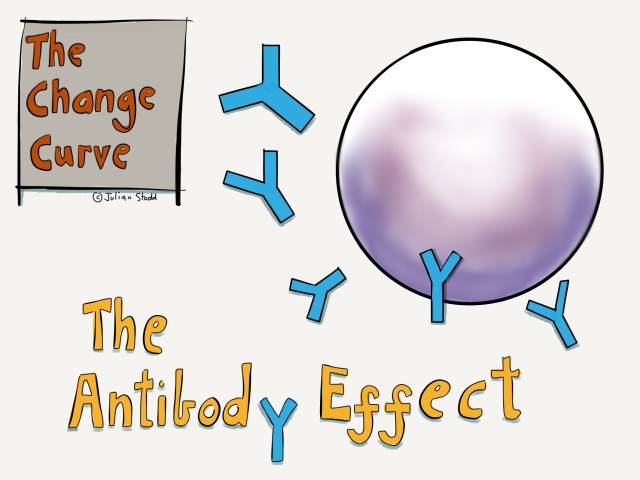 All change starts with intent, with a level of disturbance, either from within the system, or imposed from outside. Where it ends up is a function of amplification and reaction: if the change messages spread, if it’s amplified, it may gain momentum. But if it’s resisted, muted and constrained, then it will peter out. In an evolutionary mindset, some organisations are adapted to resist change: they are infra-structurally and cognitively lethargic.

Part of this lies in the Resisters of Change: these are factors that emphasise or embed the lethargy. But some are also to do with heritage, tradition, identity, competition, perspective, technology, fear and disbelief. These are often the most insidious. 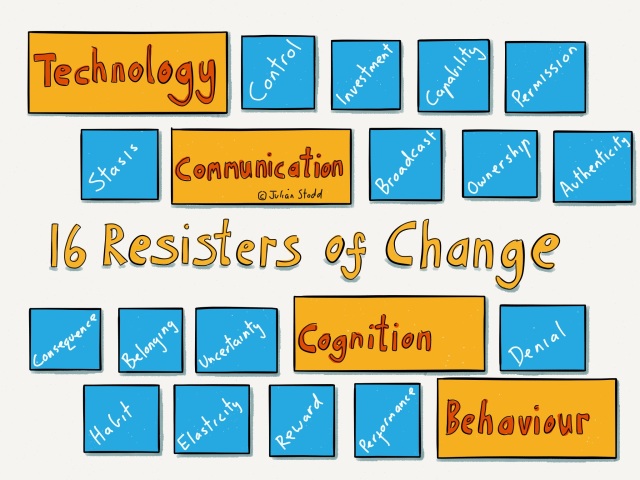 For example: look at what’s happening in medicine. The traditional role of Consultants was as holders of knowledge, with diagnostic skills and capability to determine treatment. But in the Social Age, knowledge is distributed and more freely available, as is access to our ‘sense making‘ communities. As a result, we see a well trodden path whereby patients turn up already linked into support groups and with at least a decent idea of what’s wrong. This by no means reduces the role or value of the Consultant, but it certainly changes it, possibly more towards a partnership than a teaching role.

But it’s how the profession responds that is key: does it remain vested in it’s hierarchical and positional authority, resisting the change, or does it move to a more facilitating and enabling role. This may require abandoning certain long held traditions, it may require changes to the education and professional practice processes, and it certainly requires a new mindset. And this profession is not alone. What we are interested in here is in the nature of response: does the organisation deploy antibodies, or does it welcome the change and provide avenues for people to engage in it?

Antibodies are organisational and individual behaviours and strategies that maintain the status quo. For example, by adding vast complexity to a simple question or solution, it gets bogged down and fails, maintaining the status quo, but at the cost of agility.

A classic example of this is IT. Let’s say you discover, by chance, through a recommendation from someone in your community that there’s a great new mind mapping tool. You think that it will help streamline meetings no end, plus have the benefit of creating cloud based, shareable and indexable outputs. But the organisation thinks this is an IT project, it adds complexity, it tells you that it’s not your job to define IT needs, it adds layers of procurement, it adds layers of cost, it panics about the cloud, it starves the idea until it withers and dies. So everyone is happy, except that the organisation failed to create a space for experiment, failed to be agile.

The agile organisation facilitates experimentation and discovery and uses narrative approaches to develop and share the learning.

Organisations add COMPLEXITY antibodies to simple thoughts: by paperwork, systems of control, authority and budget. Avoid complexity by creating nursery or sandbox spaces where ideas can germinate and put up gentle shoots.

Organisations use NEGLECT antibodies against the spring shoots of change in the hope that thy will go away: possibly because they are too challenging to the current hierarchies of authority or control. Create organisational repositories of narratives: which ideas keep coming up, where, how can you use this information to filter what’s good from what’s not? Don’t just starve and lose them.

Organisations deploy antibodies of AUTHORITY to simply stop change in it’s tracks: this is particularly prevalent in strongly hierarchical organisations and is a symptom of individuals being invested and anchored to their positionally defined authority. Counter this by developing Social Leadership capability, which anchors authority as Social Authority, based on reputation within our communities.

Organisations deploy PROCESS antibodies, creating a sense that ‘success‘ lies in correctly following the process. But process may constrain creativity: we have to let ideas germinate and sprout, we have to nurture change. Process can be an enabler of creativity, but only where it’s anchored in an agile mindset. Without that, it’s a mechanism of control and only delivers lethargy. Process also has a sell by date: revise it regularly as the ecosystem continues to change. Counter the Process antibody with strong permissions to question and be curious, and the right forums to share those ideas. Then deploy facilitating and enabling process to nurture the ideas.

Organisations deploy the insidious antibody of TIME, to either help starve the momentum out of ideas, or to prevent you having time to develop them. Great organisations put time aside to consider their agility: dedicated creative and reflective time, to ensure they remain relevant. Counter the time antibody by having an ability to spot good ideas and fast track them into a safe space to develop. Be unafraid to nurture bad ideas: maybe they are good ideas that just haven’t matured yet. And anyway, who said they were bad? Maybe they are just good from a different perspective. In evolution, variety and mutation are key.

The antibody of PERMISSION could maybe be classed as an autoimmune effect in that we often deploy it against ourselves: we assume that we have no remit to question or challenge. We become self limited. There are also cases where our permission is denied as a mechanism of control and exercise of formal authority. In any event, agile organisations need to view permission as something that can be granted or claimed: the question is, do you want to benefit of that wisdom to work for or against you?

Finally, the desperate antibody of STARVATION: this is a broad condition that may mean starving ideas of resource, of recognition, of permission, of technology, or of airwaves. Starvation can prevent good ideas being amplified. It can also drain the momentum out of effective change communities: bear in mind that change requires investment, not just of money, but energy too. Counter this by having appropriate mechanisms that fund early idea development and individual change agents.

These are not the only antibodies: but you get the drift. They fight against innovation, creativity, amplification and momentum. They are the enemies of agility.

But we must remember that they exist for good reason: individuals and processes that maintain the status quo have great value. To return to our evolutionary metaphor, they have conferred a selective advantage. Organisations that are focussed and hard to divert from their core purpose and method have been successful. It’s just a common challenge in the Social Age: what got us here may not get us there. The ecosystem has changed and we have to evolve to meet the new selective pressures.

I use the notion of ‘changing‘ or ‘churning‘. It’s a metaphor for what happens on the oil tanker when you throw it into reverse and steer hard to starboard: there’s a lot of juddering, a lot of noise, shaking and splashing. The water at the stern is churned up and bubbling furiously as the screws try to bite. But essentially, nothing happens. You’re still headed forward at speed. The mistake is to see the noise and juddering as motion. They’re not. They’re distraction.

It’s only when the turbines work and the screws truly get traction that things start to change: but the antibodies and the resisters stop this happening. We get stuck churning. Lots of noise, lots of activity, but no true action. And gradually the system heals over, dampens down the noise and energy, leaving us cruising on our original course.

Churning is dangerous: we think we are moving, but we are still prevaricating. Churn is not a survival behaviour, it’s a busy one. And we don’t need to be busy: we need to be smart. And purposeful.

The antibody effect can be powerful in organisations, so how do we counter it? It’s so fundamentally embedded, that we may have to effect change in parallel to the system, not try to change within it. We have to reframe the conversation: where the antibodies are effective is at damping down conversations and change within a system, within the body of the organisation, we have to create space for ideas to germinate safely, outside the body. This can be where change communities come into effect.

Where does your organisation sit on the Change Curve?

One technique for doing this is to focus on a narrative that is separate from the project or change itself. Work outside the system. For example, instead of trying to tackle the issue of why IT acts as a system of control, preventing innovation and sending antibodies against those who have creative ideas, focus on pride instead.

Start a parallel conversation about where you find pride: run that conversation across teams, and create a narrative out of the conversations to share. Find the commonality and chart the difference: we can use stories to capture the co-created view of the world. Our intent is not to find consensus, it’s to understand difference and write a story together that transcends it. The co-creative process gives everyone a voice, whilst being purposeful in finding a shared story. And once we find that story, we can use it again to spread (amplify) the notion that it’s ok to talk about change.

The Antibody effect is a reflexive response to the invasion of change: it’s an autonomic reaction, out of our control. To change the organisation, we have to evolve it. We can’t get stuck at the interface of cause and effect. We have to choose a different battle.

We can’t fight it from inside the organisational mindset: we have to create and curate conversations in a new space, a semi formal, social space. We have to build communities around ideas of change, and make these spaces magnetic, so that those with a mindset for the Social Age can find a safe home. Then we can use this community to ‘sense make’ and problem solve for the organisation: remember, we are always aiming for magnetic models of change, ‘us‘ and ‘us‘, not ‘them‘ and ‘us‘. But we have to do that in a new space to avoid autonomic effects.

The resistant organisation is not adapted to thrive or even survive in the Social Age: creating the mindset and momentum for change, so that it becomes able to adapt, is essential.