It always surprises me, the closeness of regeneration and destitution. It was with some relief that the artisan coffeeshops, dog grooming parlours and the familiar facade of Rough Trade hove into view. After twelve miles of walking through the highways and byways of Brooklyn, alternating between curiosity and bouts of fear, i was dehydrated, dispirited and ready for a return to the familiar. A return to my world.

Rough Trade started in England in the mid seventies: a space not just to buy music, but a space to hang out, a space to connect, to listen, to contribute. A community and culture delivered in a retail space. It grew to be home to punks, indie, folk and more, a record label, small chain and reputationally strong director of musical taste, reinvigorated by the resurgence of vinyl. To visit in Brooklyn is a pilgrimage as much as it is a shopping trip.

But my route is curvilinear: across the Brooklyn Bridge, through the shopping mall at Fullton, along the piers and wharves overlooking Manhattan, past the Navy Yard, through suburbs of downbeat houses, warehouse spaces, the homes of tow trucks and bodyshops, before finally emerging into the familiar and safe space of Bushwick.

The Bridge is iconic, indeed, i’ve read a whole book about it’s construction, but the experience of walking across it is more one of transition than transport. Manhattan is familiar and known: it’s districts are connected to character, the Villages, Meatpacking, Central Park, Financial, Retail, bars and shops connected by deli’s and parks. Brooklyn is new to me though and, as i cross the bridge, i have the luxury of perspective: the Manhattan skyline becomes coherent behind me, from the pinnacle of the new World Trade tower to the Empire State and Chrysler. It’s a funny thing about distance, but it can connect things in a way never possible when we are immersed in circumstance. That’s probably one of life’s lessons right there. Perspective counts, but you have to walk a long way to find it.

I’m driven across the Bridge by restlessness: my travelling has been relentless these last few months and it becomes compulsive. The desire to explore, the curiosity to walk, to discover, to push the boundaries, not just of geography but of knowledge, reflection and thought.

David asked me the other day what i do when i travel. ‘It’s where ideas come from‘, was about hte best i could give him: do what you’ve always done and you’ll probably think what you’ve always thought. Walking for me is reflective: whilst there’s no logical reason to write about walking, it filters through into the rest of my thinking. My ‘work‘, if you can call it that.

In the Social Age, the space between formal and social has collapsed or, at best, is separated from the ghetto by a paper thin line. I felt it strongly in San Francisco: the palpable tension between the homeless, restless and embedded population and the emergent, connected and enfranchised minority. A ground war fought not with guns and knives (although sometimes with these tools), but primarily through education, opportunity, economics and coffee shops. It’s not coincidence that coffee comes first: to setup is low cost and the audience is almost assured.

I didn’t pass many coffee shops on my trek through Brooklyn: not by the warehouses, not by the derelict buildings of the Navy Yard, not by the tenements. 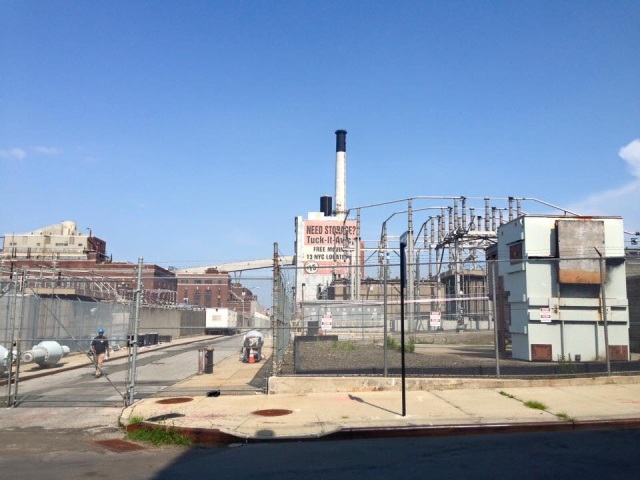 I realise my isolation was largely self imposed: i grew up in a monoculture, largely white and middle class. It’s a long haul from the Roman city, still surrounded by it’s Medieval walls, to the crumpled and fractured streets around Flushing. A long way in miles but further in experience.

The Piers are interesting: colonial expeditions into the East River. Some still functioning as warehouses, some repurposed as playgrounds, parks and sports fields, others derelict and some just memories, black posts sticking out of the water, remnants of greatness, remnants of purpose, remnants of worth.

I stop for a drink on one: a lemonade stand has sprung up and as i gulp down the cool liquid (wondering how my teeth will fare) i look at how much of the architecture is repurposed here. Anything of any age not yet swept away is converted. Facades remain, but gutted and mezzanine, up-cycled and glassed. There is not space for the old in the new, except as a wallpaper, enshrined in nominative heritage trail and tourist boards. There’s no halfway house: it’s old or it’s new. Coffee shops don’t thrive in the ghetto. The abandoned military uniform store would be out of place next to the art gallery and nouveau Mexican cantina.

Fullton mall is billed as some kind of heritage space: old, authentic shopping space, still, so the board tells me, boasting many historical businesses, but it’s like any second rate shopping street back home, all mobile phone shops, shuttered units and Burger King. I almost get excited when i hit Starbucks, but panic takes hold and i flee, walking back to the river, stumbling into a pleasant residential space that calms with with it’s serried brownstone fascias and American flags fluttering in the breeze.

America does certain spaces well: the broad, expansive, but essentially deserted roads of it’s light industrial hinterlands are something we lack in the UK. Sure, we have industrial estates, our own kind of edgelands, but it’s neither the same scale nor, strangely, the same sense of listlessness. Maybe it’s the bright sunshine on the dusty concrete that does it. Maybe it’s just more beige. We tend more towards plastic signs and truckers cafes, whilst here everything is hidden behind roller shutters and walls. There may be purposeful activity, but it’s shielded from me, and i feel more than anything else like a lone gunslinger, walking down Main Street and waiting for the Kid to emerge. 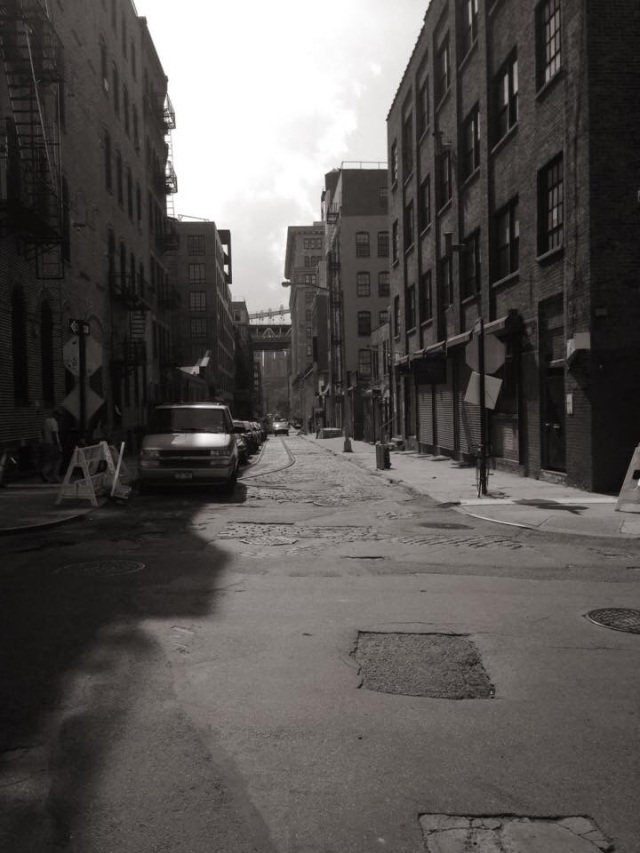 I don’t like it: i feel out of place, out of sorts, through everything from my clothes, my backpack and, dare i say, my ethnicity. I’m as prone to the effects of unconscious bias as everyone else, and i’m clear that part of my discomfort comes from this. I don’t like it, but it’s doubtless true.

The Navy Yard, in my mind, will be a place of activity, flags flying proudly in the breeze, sharply uniformed guards, possibly a frigate or two. So i’m disappointed to see what looks more like a power station, and industrial park and a series of derelict warehouses. Momentarily i’m distracted by an open air swimming pool across the street. Incongruous, the children whooping and splashing in the sun and i’m transported back to the weekend, back home, when we played games on the beach to a similar backdrop. Turn back the other way and i see hundreds of garbage sacks piled in the street. A broken pram and stench of rotting food. There’s no separation here. But i recognise that it’s largely my unfamiliarity that makes me on edge.

Two teenagers run past with their towels and an inflatable ball, laughing.

A tall, muscular man walks past, talking seemingly to himself.

A girl walks past, for some reason i think ‘web developer‘ and imagine an office in a loft with table tennis and Macs.

Two guys on bikes are hanging about on the pavement ahead: a long stretch of road with fenced empty buildings on one side and warehouses on the other. I am most uncomfortable and cross the road. I don’t know why: last time i was mugged it was by an elderly Chinese lady in Manilla, but that’s a whole other story.

Crossing bridges is transition, but walking under them is another matter: i dislike the dark and enclosed space. It’s like a reduction: road, walkway. Nothing else. There is just forwards and back, just dark and light. Digital. I always enter uncomfortably and emerge with relief.

Past the end of the Navy Yard i turn left: another street with nothing. Cross roads and i’m in familiar US territory: the world belongs to cars. No pedestrians here. Nobody. I walk for ten minutes. Then a garage, and i crack. The first taxi i’ve seen for a while passes and i flag it down. I’m hot, dehydrated and, frankly, becoming irrationally scared. Not exactly a trek through the Hindu Kush, but i have stopped enjoying myself.

In air conditioned comfort, we drive barely a mile, past more warehouses before, suddenly, we are amongst the Delis and schools of Bushwick. Shamefacedly i ask the driver to stop and walk the last five hundred metres to Rough Trade.

A long, cold drink and i feel connected again. A monastic retreat into music. The space here is magnificent: shipping containers piled high form a temple to vinyl. Warm urban shadow, but only a faint reflection of the true landscape it inhabits, the dereliction just around the corner.

As i settle in to write, i feel at home in this space: a community united not just by the familiarity of the environment, and warmth of the people, but by the founding spirit of the place. A space to share, a space to listen and connect. A space united.

The relationship between spaces and communities is fluid: you can create a space with ease, but to create community requires more. Communities are united around values and intent, they often share purpose and desire. Crucial to communities is the ability to exclude: people leave by choice or by being kicked out. Inherent to your membership of one community is your exclusion from another. And your decision on whether to join a third. Because we inhabit multiple communities in multiple spaces in the Social Age. Some fully formal and defined, some entirely social and almost hidden.

The communities around music are often centred on performance: the unity of both interest in the art-form and the rhythm driven cohesion of the crowd. The thumping, trance like momentum of the beat. Community united by more than just words.

It’s not that we can’t be fluid between spaces: i hear English accents all around me. People adapt, people move. My own reticence about Brooklyn maybe stems from my determination to remain in my current spaces and community: perhaps we need to emigrate, to be exported or excluded to truly change? I guess this is what happens when organisations get rid of people: they fracture the bonds that unite them, cast them adrift. It’s a breaking not just of legal contracts, but socially cohesive bonds too.

I come back to bridges: through both geometry and philosophy they connect us. We bridge the gap between spaces. It’s no coincidence that my disquiet commences half way over the physical bridge, but that the sum total of my disconnect is measured in more than just metres and steel. When we speak of building bridges between communities, we mean more than just arches, spans and suspension. We mean bridges between ideas, between realities. As roads can divide communities, so bridges, both physical and of ideas can reconnect. 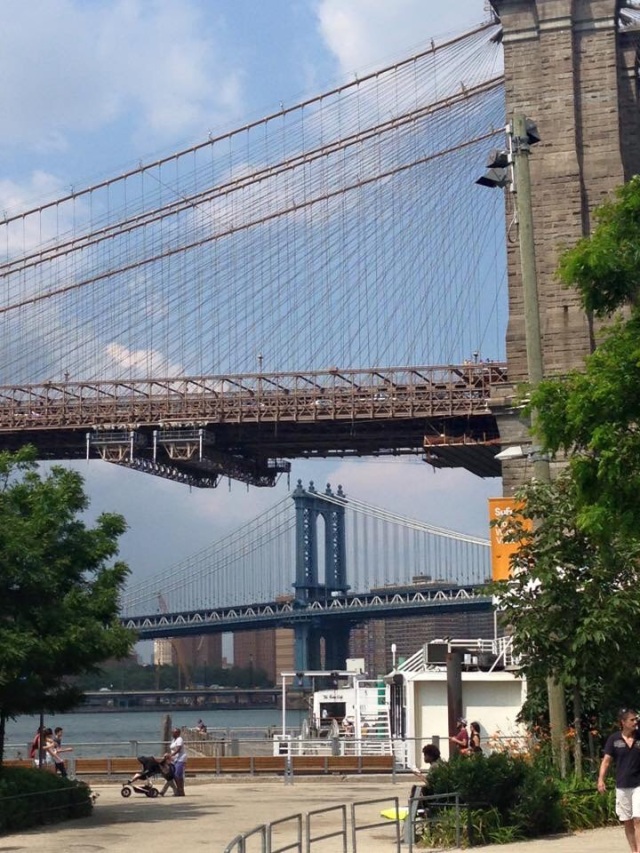 I buy some vinyl: it’s a ritual. Flicking through the records, cradling discoveries in the crook of one arm whilst skimming covers with the other. I buy coffee. I stay into the evening (this community is tolerant of lurkers), writing at a bench, browsing, eventually watching a couple of live acts who kick up.

Outside the city darkens. When i emerge, it will be alien and why pretend i will try to navigate it? I’ll Uber my way back to the hotel, back to another microcosm of familiarity. But at least i crossed the bridge.

Why travel? Because it’s through the transition that you find the new ideas. Not just through the connect, but through the disconnect. Through the uncertainty and miles.