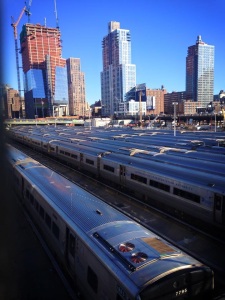 “I left him“, she said, walking slowly in the brilliant sunshine, “last month“, as she passed by where i was sitting, on one of the benches on the Highline, sipping my coffee. “But i’ve met someone“, slightly breathless, the cable of the white headphones from her iPhone interlaced with her scarf, wrapped tight against the cold, “and i’ve fallen for him!“.

Spring is in the air: my coffee is bitter, taken from the indoor market at Gansevoort, which i just discovered this trip. A converted space, repurposed, bare brick walls and a variety of artisanal food outlets. Here, within a stones throw of Google’s HQ in the Meatpacking District, there is no shortage of clientele, willing to splash out for cuban, Italian or african delights from the eclectic stalls. One whole corner set aside for tables, surrounded by a kind of natural gazebo made from carefully trained wisteria, wrapped around the urban ironwork holding up the roof. A trained embrace of wood and iron.

The Highline has been extended at it’s northern end. You used to join at 10th Avenue and 30th, climbing up the steel staircase to the elevated slice of nature. The Highline, one of my favourite places in the world, is a repurposed raised railway, supported on a vast lattice of girders and pillars, abstracted by height from the surrounding towers and alleys. But now it’s connected in a new way, a wide arc that sweeps around the end of the Penn rail depot, past serried ranks of parked and resting silvered trains, finally reaching ground level at 34th Street. 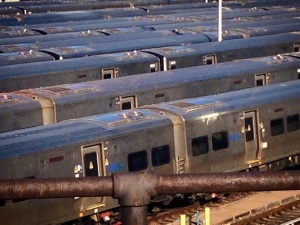 The new stretch is ambiguous. No stairs, instead it follows, i assume, the gradient and sweep of the original line, launching off from the railyard and climbing in a shallow curve: to the right, the Hudson River, languorously reaching down to the Statue of Liberty, to the left, the yard, bounded by reflective glass. It starts as tarmac: deliberately temporary. The signs explain that this section will be reimagined as the rest of the area is developed, to remain in keeping, to remain contemporary.

It’s a new way of arriving: the stairs were deliberate. You climbed out of your reality and into this abstract space, but now the entrance is analogue, an incremental distancing of your feet from the sidewalk. A slow elevation into space. I’m not sure i like it: for me, this space was always separate, reclaimed, re-loved. The entrance was not supposed to be easy: after it’s abandonment in the 80’s i imagined urban explorers scaling fences and discovering it’s plateau, sans dinosaurs, but adrift with seed heads, fallen leaves and remnants of rails.

If the massive girders are the bones, the rails are the sinews, visible perhaps through disturbances in the grass. Connecting old to new: their lines reflected through concrete and wood. In one place old sets of points have been set on end as art, a strangely cruel twist of fate for such purposeful artefacts. 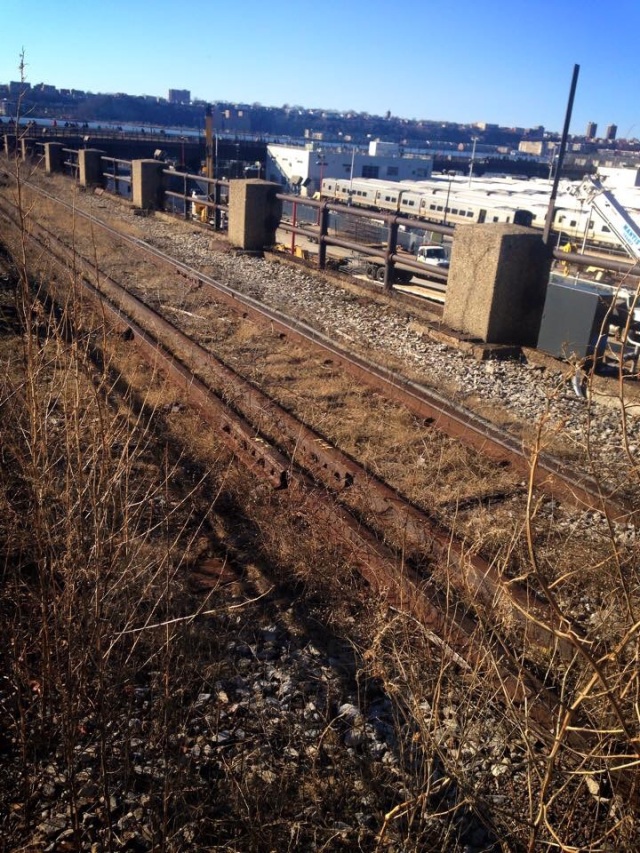 The Highline is transience epitomised: standing at a station watching trains go by, they form part of the view, but never the vista. As i sat there, watching people stroll by, fragments of conversations pass, less distorted by doppler than the carriages of old, but still fragments, distorted by context.

French, German, maybe Spanish, and the plethora tones of America. Stories running past, clipped and clattering on heels, chugging past, heading Downtown.

Periodically, the steps descend to street level: latter day stations where we disgorge people back to their reality and collect new passengers.

But this space is no longer lost: at first purpose personified, it’s original life was one of movement, of motion. Collecting, delivering, transit. Then a long sleep, a rest, dereliction and peace. Until one day the fencing rattled, disturbed, rediscovery. Repurposed. As it woke from slumber, the world had changed: the districts it crossed no longer noisy and lousy with trucks and meat, but rather reimagined, reclaimed. Renewal in action: painting over the graffiti. 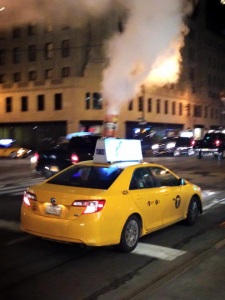 Even in the few short years it’s been open, the Highline has changed it’s landscape: in it’s new form it’s driven development of cafes, apartments, shops and galleries. Today the cargo it hauls is gentrification and hope. Scaffolding surrounds, abounds.

The city is ever reinventing: hoardings surround deep holes and pile drivers, clawing into the ground to gain foothold in the city that never sleeps.

But i still don’t like the new slope, the gradient of connection: sometimes we need separation to contextualise. Doorways between spaces. Separation from one relationship before we fall in love again.

You can find my book, “New York: Community, Spaces and Performance” here.

Author, Artist, Researcher, and Founder of Sea Salt Learning. My work explores the context of the Social Age and the intersection of formal and social systems.
View all posts by julianstodd →
This entry was posted in Exploration and tagged City, Elevation, Highline, Love, New York, NY, NYC, Separation, The Highline, Trains. Bookmark the permalink.