I walked far into the night, traversing the city, in a wide, sweeping curve from from east to west, then an abrupt turn north to cross the river and back to my hotel. My den: sanctuary with room service and a free cookie.

The city at night is abstract: a series of lit up vistas serenaded by drunks and theatregoers, separated by periods of darkness and renovation, building and dereliction. It’s a juxtaposition of the completed, the performed and the rehearsal space. The work in progress and the finished art, all in one frame. There is no backstage in the city, but rather a rolling landscape of evolution, a progression of capitalism and art, aspiration and decay.

As you walk, you are aware of textures: the mottled and rusticated stonework of the War Office deeply shadowed, it’s normal creamy finished dulled to grey under sodium caress. 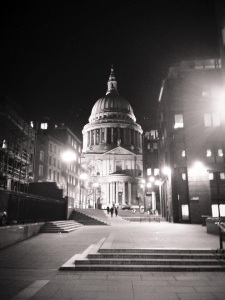 My feet cut through the gloom: i become aware of the red flash, flash, flash as they edge into my peripheral vision. I take a photography, because that’s how i document the city: sequential snapshots, stolen visions of the path, freeze frames of mini dramas and end of night arguments.

I am highly aware: aware of my surroundings, aware of other people. My eyes dart, my head turns. Footsteps echo: it’s strangely not hostile, but with the promise of it at any moment.

The traverse is emergent reason: the unfolding story. But not without a map. Earlier in the day, an American friend had pointed out the pineapple, captured in stone and summiting a dome on the National Gallery. Pineapple as fruit? No, pineapple as symbol: on Victorian estates they were grown in heated glasshouses, fires burning through the winter. To keep this smouldering nursery functioning required both wealth and power. So pineapples represent not just desert, but rather concentrated authority, hierarchical power. The trappings of establishment.

We can read the landscape with the right knowledge: architecture is, by nature, self referential. Doric and Ionic columns rub weathered shoulders with steel and wood, each referencing bygone styles, contemporary influence. This is not true evolution, but rather stylistic development: it’s like the circular movements of music: you need the structure to complete the experience. Without structure, internally moderated and realised, you just have noise. Without the visual continuity, we would just have a building. With it, we have a skyline.

Although it’s not always done right. Some architecture looms, some buildings are brutal by design, others by accident of misdirected creativity. But who’s to say what route to iconic? Accidental brilliance, emergent style. It’s a gamble. 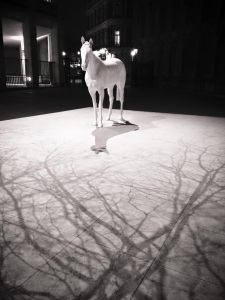 I love to walk at night: i covered twelve miles in a wide arc, thinking, snapping, watching. I saw the city: the skeletal horse on the fourth plinth, a porcelain pony, bronze figures on pedestals and plinths, red phone boxes and power substations. Railways and Tube stations, trees and the river.

It’s only through the traverse that you can make sense of it: only by walking, by exploring, that we can feel the relationship, make sense of the city.

Exploration is a skill: maybe innate, but stronger when rehearsed. We learn to see differently, as we learn to paint, to speak, to sing or play. We learn the language of the skyline, the vocabulary of architecture. We learn to read the signs.

It’s a metaphor for learning: discovering through experience. Finding our way, with a few dead ends along the way.

Author, Artist, Researcher, and Founder of Sea Salt Learning. My work explores the context of the Social Age and the intersection of formal and social systems.
View all posts by julianstodd →
This entry was posted in Exploration and tagged Exploration, Fourth Plinth, Learning, London, Map, Maps, Metaphor, Shadow, Statues, Traverse, War Office. Bookmark the permalink.