Monarchs and Monasteries: Emergent Communities in the Social Age

There’s the thing, then, much later, the memory of the thing. 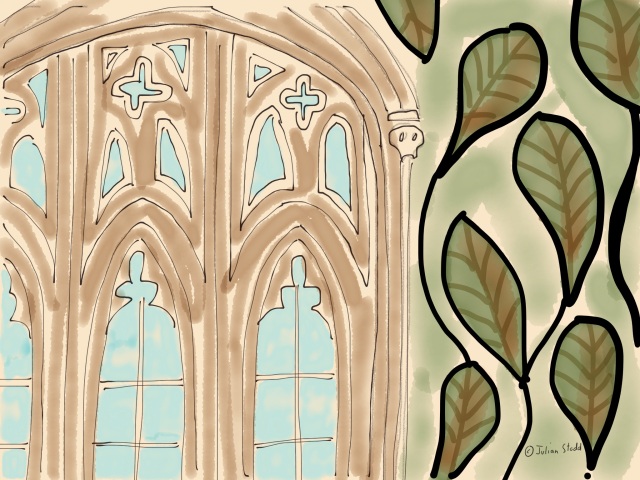 The moment when you push aside the brambles, kick down the tall grass and see the old stones and crumbling mortar revealed to the light of day one more time.

Walk anywhere you like in the UK and you walk through history: remnants of which loiter in the landscape like broken teeth and discarded shoes. Repurposed, reused, reinterpreted, made relevant for the modern age.

In Medieval times, the monasteries were a network of power and social cohesion, spread through the landscape, permeating every city and infiltrating the countryside. They weren’t additions, bolted onto communities, but rather central in their development and, through taxation, tithes and influence, central to their growth.

The Church represents itself through architecture, ritual and costume. Religious buildings are of a particular style. Religious buildings serve many purposes: they are iconic in that they symbolise power, a physical representation of the power of the church cut into the landscape. They are representative of community, indeed, they housed communities. A monastery without a community is just a shell, a space, waiting to be. Buildings alone do not make purpose: rather they facilitate communities, who create stories and share them.

The buildings themselves can shape the story, may even house the story in libraries and great halls, but without the community, they lose context, lose their meaning. Monasteries were hubs: concentrations of resource, of power, of influence.

I worked for a while as an archaeologist, unearthing traces of buildings long gone: wooden posts in the ground leave traces as darker soil, whilst stone walls leave behind foundations. One trench i worked on yielded the ash from a fireplace and rusty deposits that indicated a smithy, where the blacksmith of the village had fashioned horseshoes and gone about his work. But that was just a supposition: we examined the evidence and made a guess. It was close to the church, which survived, but located today in a field of cows. The rest of the village was long gone, abandoned centuries ago.

The monastic network spread far and wide, imposing stone buildings, cloisters and seminaries. But nothing lasts forever and their time came around 1540 when King Henry VIII disbanded them through a set of legal measures, appropriating their wealth for the crown and, in the process, ridding himself of a headache.

The people were dispersed, the treasures seized. The costumes were discarded or reused and the rituals hidden undercover, restricted, persecuted or lost. But the buildings remained, becoming, in time, not places for worship but, often, sources of building material. Quarries, not of stone in the ground but rather of stone ready cut and carved, ready for repurposing.

So the physical shape of the monasteries changed: they spread, piece by piece into the landscape. Reused, repurposed: you will find farmhouses and private homes that incorporate a strangely decorated door post or a particularly grand window, borrowed and adapted to fit a new space.

The monasteries were rooted in architecture, grounded in reality: but the idea of the church, belief itself, was not. Belief needs no home except that which we create in ourselves and our stories.

The monasteries fell, but the Church survived. The rituals and beliefs were grounded not in massive stone foundations and high vaulted ceilings but rather in shared purpose, shared values, shared intent, which is less tangible, harder to stamp out and prone to amplification.

In the Social Age, the cathedrals are virtual and the communities online. United by purpose, intent, belief and value.

And they are emergent.

The monasteries took centuries to build, decades to decay, but our latter day communities are born in an instant and movable at will. The infrastructure that we use to build our churches of knowledge is democratised and free: whilst infrastructure used to differentiate us, used to take massive effort, time and money to assemble, today it’s effortless.

Today our communities are often grounded in shared values and purpose: we engage in communities or create them as we need. It’s a core skill of the Social Age to IDENTIFY where these communities sit, to ENGAGE effectively and to add VALUE once we are in.

But furthermore, we can CREATE them: if the community doesn’t exist, it’s our role to build it. We don’t need eight hundred tons of lime mortar and a stonemason anymore: just an idea to build momentum around.

The monasteries made the Medieval Church lethargic: grounded as they were in massive architecture, they were institutionally unable to adapt to the changing political and sociological landscape. Organisations can learn from this: learn to be agile, and agility includes the ability to host emergent communities.

In the Social Age, communities host learning, drive change and share best practice. We can use them to be more agile, as long as we are fluid in our approach. Don’t build your own monastery: build momentum in your stories instead.

31 Responses to Monarchs and Monasteries: Emergent Communities in the Social Age