Barely a mile and a half by one mile, Brownsea Island is hard to get lost on. Nestled like a cork in the bottleneck of Poole Harbour, it’s been inhabited since ancient times, most recently by the National Trust, who preserve and protect it for the nation as a nature reserve and tourist destination.

Famed as a last bastion of the red squirrel and birthplace of the Scouting movement, it’s place in history is assured, if niche.

I’m here for the week: spending time with family, walking and writing, staying in the old Customs cottage on the quayside.

Islands often struggle to find their purpose, and Brownsea is no exception: over the centuries it’s been variously reincarnated as a daffodil nursery, country estate, shooting lodge, fortress, WW2 decoy, pottery and wilderness.

Like all islands, the constrictions of the water that surround it both give it an urgency and strength. Though separated from Middle England by a scant three hundred metres of water, there is a definite other place atmosphere about it.

Boats are semi mystical: subject to strange customs and currents. Insular and fierce: whether bobbing about on the turbulent waters of the harbour mouth or clustered, moored on the quay, like ducks chasing the last few bits of bread. The captain is an aloof icon: separated often by both height (perched on the bridge above us) and by attitude. The last to leave the ship, their power is both absolute and palpable as they nudge the boat closer to the jetty, inching in to a soft landing against the tide as the waters swirl around us. 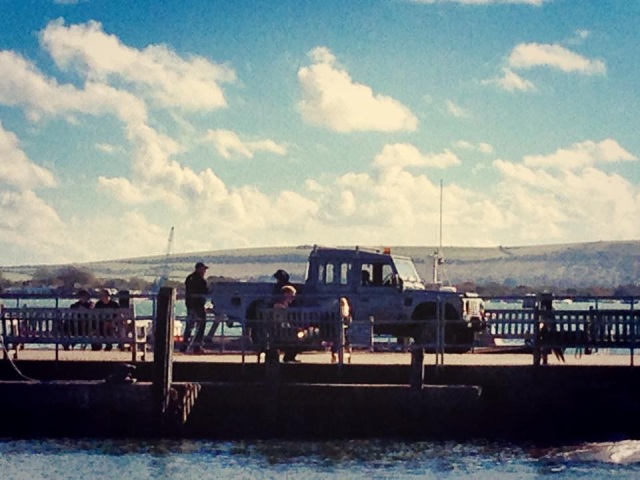 Twice a day the tides rise here: in the mouth of harbour, the water is unpredictable, divided, conflicted. When you kayak here, sensations change by the moment: one minute you sweep forward, the next the hull is gripped as if by treacle. Sticky and turgid, the currents pull you too and fro, before you cut free again on a surge of salty water and make progress once more. Indeed, kayak around the island and you feel it all: the power of the tide behind you, the confusion at the far end of the land, where you sweep round for the return leg and the final battle into the tide.

Shorelines separate this saline domain from the woodlands and peppered heathland of the island. But the shoreline is not a ‘no man’s land‘. It’s a battleground.

In times gone by, the island housed a substantial pottery and, as you walk the shoreline, you see shards and ruins sandwiched in the clay and peat as the cliffs are cut back by the waves. Indeed, the beach on the westward end of the island is carpeted not by sand or stone but instead broken brick and shattered pottery, crunching underfoot as you walk.

Tethered by seaweed, fallen trees bridge the liminal zone and rest their boughs in the water.

The spine of the island is broached by a stretch of heathland: it’s surface slightly undulating, telling the story of it’s history as a daffodil farm. In bygone ages the blooms and bulbs from here were taken by boat and train to Covent Garden Market in the heart of London to be sold, but today the ridges lie abandoned, though the bulbs still spout, providing tempting and succulent treats to the deer that roam free. The daffodil farm was yet one more attempt to find value in this land: more successful than the pottery, which bankrupted the owner, or the planned resort which was cut short by the great depression.

In a time of constant change, islands are reassuringly static, but we shouldn’t confuse this lethargy with purpose. The land today is preserved, isolated from commercial or environmental pressures by the National Trust, an entity entrusted with conservation and stasis. But restless beneath the surface is an energy and vibrancy: it’s hard to keep an island static. As the sea erodes one side, the silt is deposited elsewhere in an ever moving dance of change. Trees grow and fall: on one stump the age is carved: nearly four hundred years old the oak that fell here. Four hundred years can see a lot of change.

My time on the island is just a dot, a grain of time on a beach. But i can feel there is more here than stasis: the energy of the waters swirling around us permeates the land, drives change in everything, just beneath the surface.