Baseball: the ritual of the game 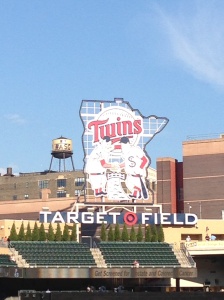 As the sun went down over the Target Centre, Robert and I sat in companionable silence, beer and pizza in hand, watching the game. Next to us, a group of college students, joking and shouting. Behind us a mother with young son. In front, the whole row of seventeen seats taken up by a group of guys from work, the older, grey haired, grizzled ones teasing the apprentice when he got asked for ID.

Downtown Minneapolis sports a new stadium, home of the Twins and typical of every American city in being a meeting place for a wide cross section of society. Old and young, rich and poor. Way up high, a chorus of ‘happy birthday‘ rang out for an eighty five year old lady who’d come to support her team.

The rituals are embedded in the game: we all stand for the National Anthem, the routine of the warm up where white clad hitters swing the bat and stretch muscles before stepping up. Periodically the mascot emerges, a giant bear having his picture taken with young children and screaming gaggles of girls.

Between the action, the roaming cameras pick people out of the crowd to show on the big screen and my latent English reticence makes me shrink lower in my seat as it’s all seeing lens sweeps closer, terrified i’ll be forced to smile and wave whilst waiting for it to pass. 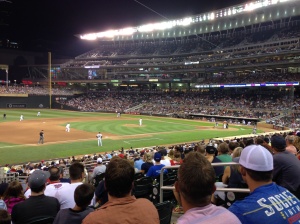 Baseball is a game of statistics: the screens showing batting averages and illustrating the curves hitters take. Discussion, argument and supposition thrive whilst the action plays out to a soundtrack of cheers, jeers and rock songs.

At one stage a stray foul ball smacks into the illuminated sign above our head, causing me to duck and remember the time i got knocked out by a cricket ball: one that i’d batted myself in a freak demonstration of incompetence that sent it sailing high into the air above my head. I still remember the feel of the golf ball shaped lump it left.

The rituals of hot dogs, popcorn and beer sold down the aisles. The semi stylised cries from vendors as their keen eyes sweep the crowds in search of trade and tips.

Maybe a more recent ritual is the airport style security as you enter the stadium: unwelcome perhaps but a sign of the times as the security guard with wary eyes open my sunglass case to be sure i’m not packing any heat.

The uniforms abound: the home team in crisp white whilst the visitors sport grey. Security surround the pitch in crisp polo shorts and black earpieces. Stewards glow yellow. Fans demonstrate a mixed wardrobe of faded and over-washed team colours or the latest strip with favoured players name and number. Two men presenting the live TV broadcast sit framed with the field behind them, they wear sharp grey suites as a curious crowd stare and they give fixed smiles to camera.

The rituals on the field are no less varied: periodically (there may be a routine, but I’m unable to discern it) four men come out towing boards behind them and trace elaborate circles on the red earth to smooth out the surface. I’m struck by the dichotomy of these players earning upwards of a million dollars a year on impeccably manicured surfaces and elsewhere around the country where snotty nosed kids blat their inherited baseball into a worn out glove on a tufted grass pitch. It’s a metaphor for America itself: the gulf between a wealthy elite and disenfranchised and impoverished class in second class housing with no healthcare. We love the spectacle of the carefully curated space, the ironed shirts and mirror flat soil, whilst hiding away from the ghetto.

The Padres playing in San Diego

As the game drew to a close, the Twins lagging far behind with a paltry two against Cleveland’s seven, a loyal fan still shouted out “come on boys, we’ve got them right where we want them” as the closing shots were fired in front of a stadium already half empty as the crowd had sensed the early loss of spirit.

The young boy behind me dropped his treasured baseball, relic i suppose from a previous game, and it passed me, bumping down the stepped concrete tiers. I retrieved it for him from amongst the drifts of discarded plastic beer cups, hot dog wrappers and peanut shells. He seemed pleased.

The stadium emptied, disgorging people to car parks and the light rail system, all talk of work tomorrow, plans for the weekend and maybe a ticket to tomorrow nights game in the hope of a better outcome. In the still night air I thought of how it must feel, to hit the home run, the glare of the arc lamps and shouts of the crowd lost to your own breathing and immediacy of the smack as the wood hits the ball, the shock travelling through your arm. An experienced player must know at once when they’ve taken that clean shot.

We live our lives around rituals, from cleaning our teeth to the sunday trip to the coffee shop to read the paper. The rituals of baseball are shared: donning our uniforms, gathering in the hallowed space, following the routine, marshalled by music and the nine segments of the game. Shared experiences for a society which bring cohesion. Rituals unite us.

Author and Founder of Sea Salt Learning. My work explores the Social Age. I’ve written ten books, and over 2,000 articles, and still learning...
View all posts by julianstodd →
This entry was posted in Games and tagged Ball, Baseball, Game, Minneapolis, Ritual, rituals, the Twins, Twins, Uniform. Bookmark the permalink.

7 Responses to Baseball: the ritual of the game