How do stories work?

I’m just back from a weekend in the Netherlands, which included a visit to Efterling, one of the world’s oldest theme parks and home to the Enchanted Forest. As the name suggests, it’s a woodland setting for a range of set piece dioramas, illustrating many classic fairytales. For example, there’s a real castle for Sleeping Beauty, where you can climb to the tower to see her sleeping and follow the sound of snoring to the guard slumbering beneath a tree. It’s a combination of the old fashioned, dioramas and simple animatronics, rambling architecture, and modern video projection. 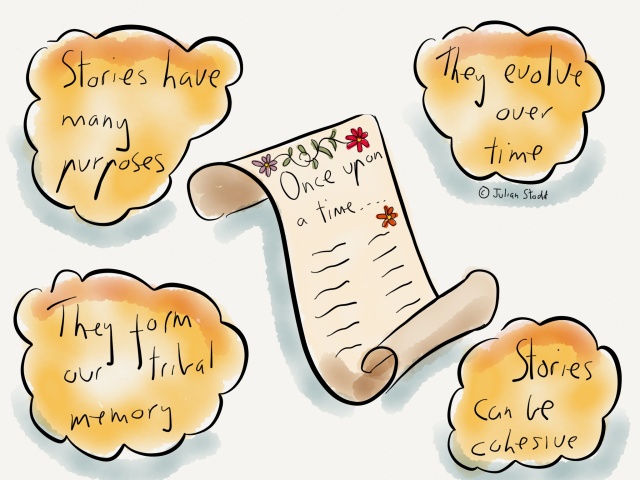 Stories have many functions: they can take on a life of their own. We need to explore and understand where they get their power from and how we can be better storytellers

Despite a poor grasp of Dutch, the stories were mainly well known to me: fairytales straddle cultural boundaries between countries, addressing as they do some common subjects and challenges, so whilst the names may vary as does the exact makeup of the fantasy pantheon, the stories are recognisable.

Stories serve many functions: they can provide warnings of the danger of straying far from home, the importance of honesty, the value of humility or the need to be brave. They can celebrate heroism, or help us come to terms with the unknown.

Stories are not inherently truthful, but they may hold truth within them, albeit from one particular viewpoint or stance.

They’re certainly contextual, as we see with older stories that may have lost their political or social context and hence, to large extent, their meaning. For example, one diorama shows the ‘Little Match Girl‘, who we see out on the street in the winter, huddled in the snow, selling matches to make a living. In the diorama, as she lights a match, we see scenes from her life played out in the smoke, until the final match goes out. At that point, a ghostly figure comes down and we see her soul leave, to be reunited with her mother as both head up, presumably to heaven. Happy ending or damning social comment on neglect and a child freezing to death?

On one reading, a salve for guilty conscience: don’t worry that we didn’t make her life better, at least she was saved in the end. Or a story to reassure young children that they will never be alone, even in their darkest hour?

One could view this story as Christian propaganda, or as a call to arms for social reform. Maybe it was intended in one context and subverted for another, maybe it’s lost it’s context and now has a new, socially derived one? 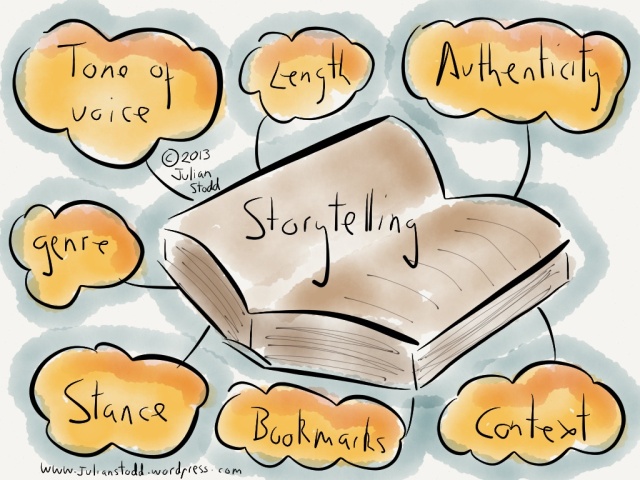 Storytelling is made up of many elements: choosing genre, style, stance and tone of voice, among them

Stories may serve a purpose that we intend for them, or another, entirely different one, which is emergent as situations change: we see this with photographs, which can be repurposed, cropped, contextualised or, indeed, edited, changing their meaning, altering their story. Recently one of the UK daily papers ran a story about food banks, alongside a picture of a child crying. A sad story. But the photograph was actually a stock image of a girl who was sad because her pet earthworm had died: her grief had been appropriated for a different story. A lie? An illustration? Depends what the purpose of the story was in this case: social commentary, or factual news. And was everyone clear about which purpose it served?

Stories sit at the heart of learning, providing context for our narratives and building shared understanding. They are convenient packages for information and support the creation of meaning. Social leaders need to be great storytellers, but they need to understand the power of stories before they can use them. To blunder into the world of stories without recognising their power and independence can be risky. Take Quantas, who tried to tell a story of ‘first class moments‘ only to have their story appropriated by irked passengers experiencing epic delays. You can write a story and tell it, but can you ever really own it? Once stories are told and retold, they take a life of their own.

Terry Pratchett refers to his fictional element ‘narrativium‘, the stuff of stories, and he may be onto something. Once we recognise we are within a storytelling context, we adapt our interpretation accordingly. Indeed, this is the basis of the misunderstanding (or misdirection) in the newspaper story i related earlier: telling a story in one was whilst the audience had a different context.

I guess the function of stories is as varied as the functions to which we put them: they are adaptable and subversive, they lack ownership or accountability as, by their nature, they can be fictional or factual (or somewhere in between…). And, true to the best communication theory, story told may well not be story received.

Whilst we may not be able to understand or master every story, the skills of the storyteller nevertheless sit within social leadership, and with good cause: it’s hard to be effective without an ability to shape and share stories.

In the evening, there was a storytelling character at the theme park: a wizened old man with flowing beard, cloak and staff, all iconic storytelling artefacts and traits of wisdom earned through age and experience. Children gathered in rapt fascination on low benches as he told them stories, leaning in and getting quieter at times, so that they leant in too, then bellowing and leaning back, banging his staff on the ground to make them jump at the resolution of a particular thread or chapter. All of this i understood, without even understanding more than a few words of the language. The visual and aural techniques of storytelling transcend the stories themselves (a theme i explore much more around music and learning).

The authenticity of the storyteller depends to a large extent upon their mastery of these techniques: a great story told in the wrong style may lose impact. There’s more than words to stories, just as there’s more than notes and lyrics to a great song. There is passion and purpose, intent and energy. Storytelling is a co-creative process, a dance between audience, author and the story itself, which writhes and twists between their respective grasps, searching for it’s meaning, finding it’s purpose.

28 Responses to How do stories work?