I got mugged in Manila last week: an unpleasant addendum to an otherwise productive trip. I’d got chatting to an elderly Chinese lady in cafe who spiked my drink with a strong tranquilliser, leaving me unconscious until picked up by security. She stole my phone and wallet. More harm to my pride than my body, but it made me thing about trust, rules, tribal knowledge and consequences. When we ask people to engage in online social spaces or organisational communities, many of the same rules apply. 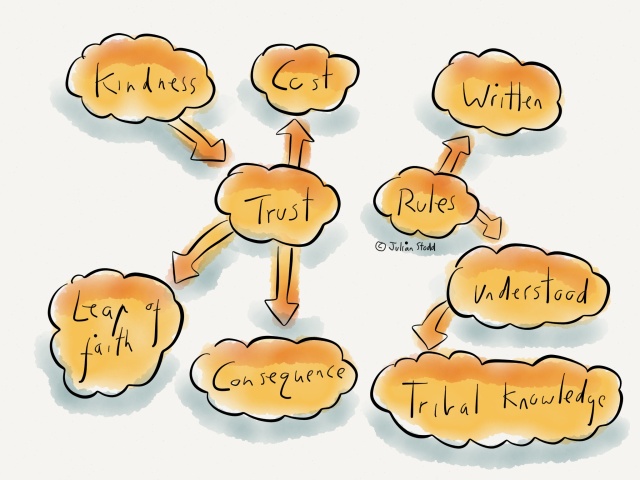 Trust is earned, through kindness and integrity. There are consequences when it’s broken.

Kindness generates trust: that’s why humility and high Social Capital sit within Social Leadership as ways of engaging communities. But trust requires a leap of faith and there are consequences when it’s breached. Landing in a new city, I know nothing of the customs and habits. In the words of a waiter i chatted to, I stood out like a sore thumb. It’s the same for newcomers in any social space: newcomers on Twitter or a forum space don’t understand the rules, the etiquette. They don’t know what’s safe, what’s impolite and what’s frowned upon. Worse, they may bring notions of correctness over from other spaces that don’t apply in these ones, which can leave them vulnerable to abuse: it turns out it’s common for this type of attack to take place, I just hadn’t done my research.

So kindness can generate trust, but it requires a leap of faith: if that faith is broken, there are consequences. Currently my level of trust in Manilla is low: when a policeman who I’d got on well with asked if I wanted to get a drink I declined. Lesson learnt. But my broken trust is at the cost of kindness: I feel less charitable right now, a little more self centred.

All spaces have rules: some of which are written, others of which are just understood. For example, if you wait to cross the road in Manilla till the traffic stops for you, you’ll be waiting a long time. The correct approach is to stick your arm out and go for it. The traffic just stops. Try that in London and you’ll get hooted at or lose your arm, but it’s strangely easy in Manila. Social spaces and organisational communities similarly have both written and unwritten rules, which is particularly problematic for social learning which takes place in the semi formal spaces between the written rules and social conventions.

For example, one of the delegates was talking to me about an English colleague who they interact with in their company forum: “he writes xx at the end of messages, what does this mean?” She asked. I explained that an ‘x’ is a kiss, but that you’d normally just use it for friends. ‘Xx’ kind of means two kisses, it’s a bit more direct. But it’s a bit of a hazy rule: on the one hand, I wanted to tell her that writing back with a ‘xx’ at the end may be misread by him as a sign, but on the other hand, in social spaces, it’s common. I’d never use it at work though.

Except, now it think about it, I do send kisses to one person i work with, because she’s an old friend and it would seem odd not too. So it’s a bit complex… Social convention in formal spaces: the classic Christmas party space for error.

Rules often form part of the tribal knowledge: the unwritten code absorbed by osmosis as we integrate into a community.

I got chatting to an Air Force officer at the hotel who described his experience when he moved to Manila four years ago. At first it was alien, foreign, and he, too, spoke of ‘sticking out like a sore thumb‘. But gradually he learnt how to move around town, how to dress, to speak, to act like a local. He acclimatised, not through a formal process, but an osmotic one. So, ultimately, we integrate over time by absorbing the tribal knowledge by, in fact, joining the tribe.

So trust is built through actions, damaged by them too: rules are learnt through formal and social channels and, ultimately, through osmotic integration into a culture. But not for me: I’ve lost my trust in Manila and am on the flight out as we speak, heading to the islands where I can relax more and regain my faith in humanity.

Author, Artist, Researcher, and Founder of Sea Salt Learning. My work explores the context of the Social Age and the intersection of formal and social systems.
View all posts by julianstodd →
This entry was posted in Community, Trust and tagged Breach of Trust, Culture, Islands, leap of faith, Manila, Mugging, Reflection, Rules, social spaces, tribal knowledge, Trust, Unwritten Rules. Bookmark the permalink.
Loading Comments...
%d bloggers like this: