I’m sat in the transit lounge of Singapore airport, on my way to Manila, so making a connection in a very literal sense. I wrote a book in Singapore in 2012, called ‘Learning, Knowledge and Meaning‘. It was about how we make sense of the world around us, how we learn. That was about making connections too. About how we learn new things, compare them to what we already know to be true and change as a result. It was a reflection on perspective and the creation of meaning. 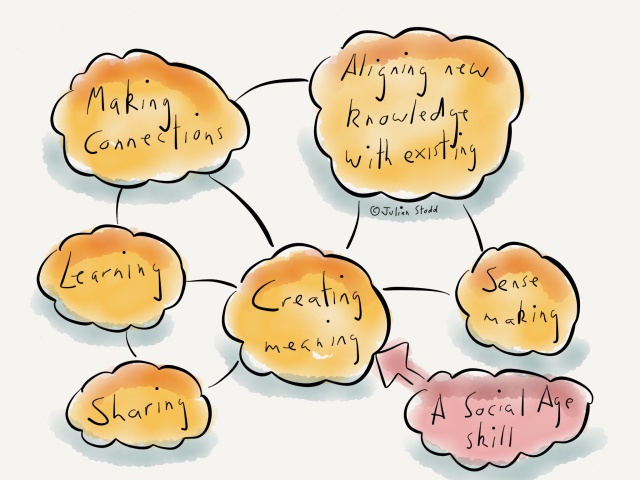 Sense making takes place within and alongside our communities: we learn and create meaning over time

I was prompted into writing it by seeing the cranes that tower over Singapore docks (one of the largest docks in the world). Each crane has a large structure on top for the crew, each one working in isolation, moving containers, loading or unloading a ship, but all individuals. Yet somehow connected in a wider plan. Surely nobody within one of those cranes had the same perspective as some other, unseen, yes all knowing controller, who orchestrated the whole thing. From the point of view of the docks, you needed a broad perspective to understand what it was all about.

I guess that’s true for many things: i think it was in a Terry Pratchett book that i read about how learning lets you understand the wider boundaries of your ignorance. You rarely reach the final stages of enlightenment, but rather uncover new mysteries to solve, new things to learn.

As we learn, we make connections, we align what we find out with what we already know and, within and alongside our communities, make sense of it: when i wrote the Singapore Diary, i hadn’t developed my ideas about the Social Age or communities, so i think i underplayed that aspect. I was focussed more on our internalised sense making.

Creating meaning is a very Social Age trait: it’s about agility and fluidity, the ability to get things done and do it again, differently, tomorrow. Making connections, learning, sharing.

As i reflected on ‘Learning, Knowledge and Meaning‘ in that book, looking back now, i realise it was a foundation for my evolving definition of the Social Age. My first attempt to reflect on the ecosystem we inhabit and how we make sense of it, how we create value.

Today, two years or so later, i’m spending the next couple of weeks travelling, running some workshops and aiming to write more for my next book around Social Leadership. This is the nature of our wisdom: it grows, step by step, as we learn, co-create, socialise our thinking and share our stories. Whether we be in Singapore or Swindon.